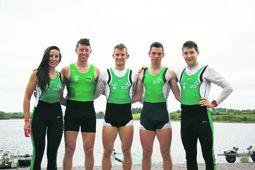 SKIBBEREEN brothers Gary and Paul O’Donovan will step up their preparations for the world senior rowing championships, and their attempts to qualify for next summer’s Olympic Games, this weekend.

The Lisheen duo and three more West Cork rowers – Denise Walsh, Shane O’Driscoll and Mark O’Donovan – have been selected on the 12-strong Rowing Ireland team that will compete at the World Cup Regatta in Lucerne this weekend. This is the last major international regatta before the world championships at the end of August.

Considering that the world championships also serve as an Olympic qualification regatta with places in Rio next summer up for grabs, Lucerne offers the five Skibbereen rowers the chance to not only gauge their current progress but also check out the crews they will be in direct competition with at the worlds for those Olympic places.

Gary (Skibbereen RC) and Paul (UCD BC), who finished fifth in the A final of the men’s lightweight double at the recent European championships in Poznan, will look to continue their recent improvement this weekend in Lucerne, where heats take place on Friday morning and afternoon, followed by semi-finals on Saturday and finals on Sunday.

Denise was previously an A finalist in the lightweight single scull at the World U23 championships held in Austria.

Meanwhile, Skibb duo Shane O’Driscoll (Skibbereen RC) and Mark O’Donovan (Old Collegians BC) team up in a lightweight pair this weekend. They posted an impressive time in the recent Cork Regatta, having only recently made the move to the pair. The duo had competed in a four at the Europeans.

For Gary and Paul O’Donovan – recently named the Afloat Rowers of the Month for May – they are looking to build on their fifth place finish at the Europeans this weekend in Lucerne, with the world championships in France next month the big target. A top 11 finish at the worlds guarantees a place at the Olympic Games.

‘We came fifth in the Europeans but there could still be crews faster than us that we haven’t raced. We will race everyone this weekend and we’ll know exactly what’s required of us over the next six weeks of training before the world championships,’ older brother Paul told The Southern Star.

‘At the Europeans, obviously we were missing South Africa, America and New Zealand, and two of the big European crews, Italy and Germany, didn’t take part either, but everyone will be turning up to this regatta. The Japanese have two crews entered and it will be almost a replica of the world championships.’

Targeting an A final appearance this weekend in Lucerne, which would leave the duo in good shape ahead of the worlds, Gary and Paul are happy with how training has progressed since the Europeans.

‘We haven’t been training entirely together. We’ve done some work on our own in the singles as well so we are working on our own individual technique, which we can bring into the double and put it all together then,’ Gary explained.

‘Three times a week we’d race against each other in the single scull, which is good because it provides a competitive edge.

‘We were in the Cork Regatta recently. Paul won the single, I was second, which was good, and we both posted fast times as well, which is promising because it shows we both have individual speed. It’s now about matching that together in the double.’