‘THERE were lights on in every house I drove past around 3am in the morning. Every house had a light on and it was an amazing sight.’

Skibbereen Rowing Club President Nuala Lupton is no stranger to her beloved sport causing excitement inside and outside the West Cork town.

She was the first club member to row for Ireland at the world championships, that was in 1975, and she also won the club’s first-ever national rowing title in 1976, and she has been involved in the club for the past 50 years so she has seen it all. Well, she thought she had.

Yet driving home from Skibbereen Rowing Club’s HQ in the middle of the night last Thursday, and not long after Fintan McCarthy and Paul O’Donovan had claimed gold in Tokyo, Lupton was met by hundreds of living room lights dancing in the darkness like fireflies.

Following on from Paul and Gary O’Donovan’s 2016 Olympic success and subsequent homecoming, the Skibbereen Rowing Club President was overjoyed to see Paul and Fintan and Emily Hegarty, who has won an Olympic bronze with the Ireland women’s four, continue her town’s Olympic medal-winning feat.

‘The overwhelming emotion was one of relief when Paul and Fintan won,’ Lupton says.

‘That’s because everybody expected a gold medal. We in rowing all know that Olympic medals are not easy to come by. So the fact that Paul and Fintan actually achieved it, and they had to row hard for it and they didn’t get it easily, meant it was just a feeling of relief really.

‘Everyone had been so nervous and sick in our stomachs coming up to the final because we knew they had the ability but anything can happen. For a start, the conditions out there were very difficult, sure there was a boat capsized and everything. Thankfully, the lads would be more used to rough waters than the others would have been.

‘The overwhelming feeling is one of relief that Paul and Fintan achieved what they were capable of.’

Not surprisingly, Skibbereen Rowing Club has attracted national and international attention in the run up to the Tokyo Olympics. The club’s ability to keep their rowers’ feet firmly within their boats and focussed on the job at hand deserves praise considering all the surrounding hype.

Yet, the ability to watch Emily Hegarty, Fintan McCarthy and Paul O’Donovan cross their respective finishing lines within the confines of her hometown club made those triumphs all the more special.

‘We had a little gathering in the club,’ Lupton says.

‘It was outdoors and inside our training ‘tunnel’ that was set up when our athletes weren’t allowed train indoors due to Covid restrictions. It is open-air and was a bit weird alright. It was in the middle of the night too and dark apart from the television screen. And it was freezing cold.

‘We didn’t feel any cold when they won, I can tell you! One of our founder members was there watching with us, Richard Hosford, and a small gathering of people who have been involved down through the years.

‘It was a bit strange in comparison to the last time (Rio 2016) because everybody could watch the races at the same time and you had all the cars hooting their horns during the afternoon and evenings. When I was driving home afterwards, there were lights on in every house I passed around 3am in the morning. Every house had a light on and it was an amazing sight.’ 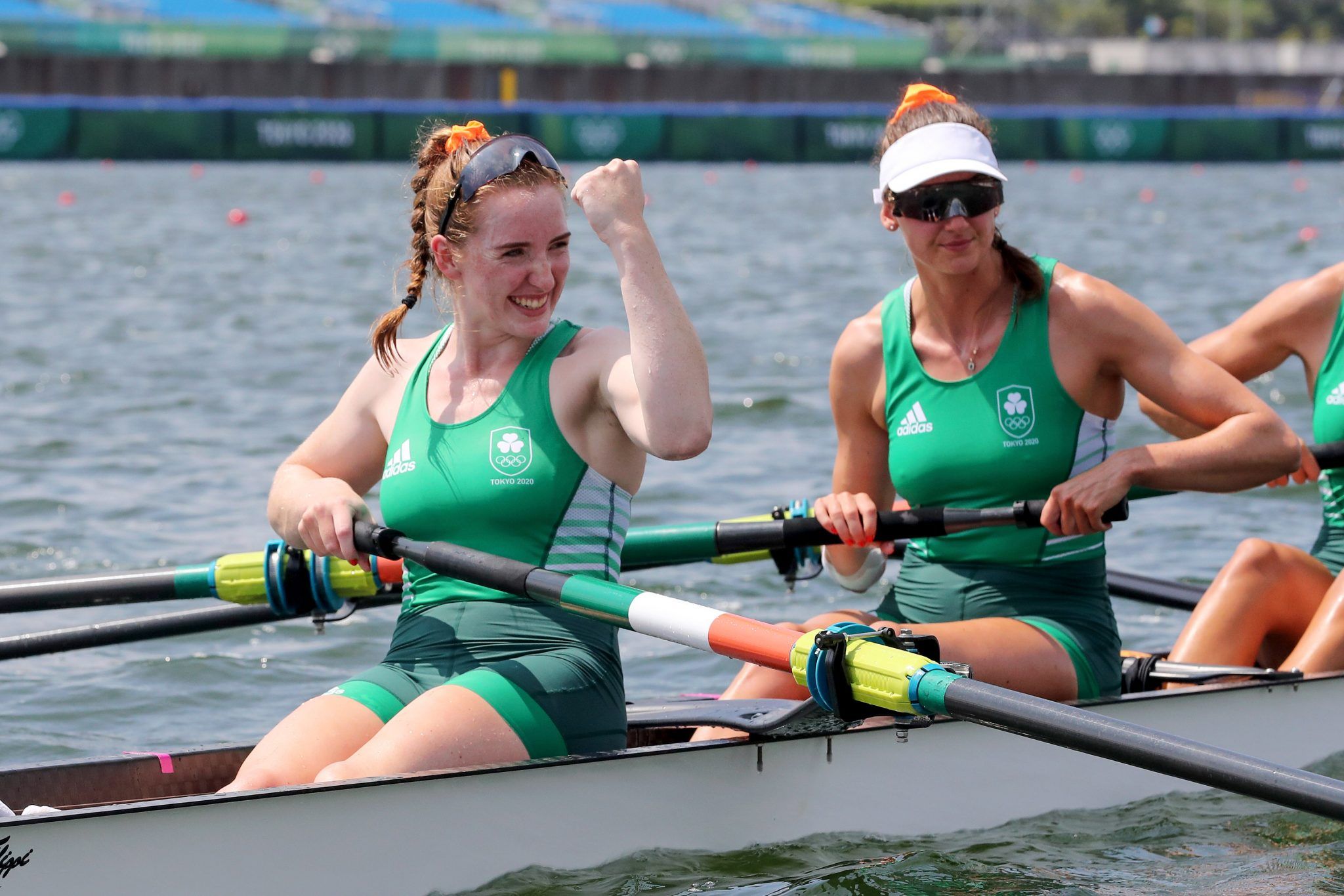 Ireland's Fiona Murtagh and Emily Hegarty celebrate after winning a bronze medals at the Tokyo Games.

Skibbereen’s Emily Hegarty – along with Fiona Murtagh, Eimear Lambe and Aifric Keogh – claimed Olympic bronze in the women’s four last week to kick-start off an unforgettable couple of days for Team Ireland’s rowers.

Seeing Hegarty bring another Olympic medal back to Skibbereen, and Aoife Casey represent her country with distinction too, brought particular joy to Nuala Lupton.

‘As for our girls, they were absolutely amazing and we were so delighted for Emily,’ she says.

‘They are the loveliest people. And not forgetting Aoife Casey who came eighth overall with Mags Cremen in the women’s lightweight doubles. They rowed a brilliant race in the B final and we are so proud of all the Irish women.

‘Female involvement in Skibbereen rowing goes back 50 years. From the club’s very beginning, we had equal participation, male and female, both on committees and on the water. Women have been really important and an extraordinarily strong part of our club. Everybody is equal within the club.

‘There was never any boat reserved for the boys ahead of the girls, it only ever depended on the size of the boat and who wanted it. They were the only criteria. Skibbereen Rowing Club has had male and female success down through the last 50 years. The last two Olympics are the culmination of all that hard work.’

Outside the confines of the clubhouse and River Ilen base, Skibbereen and its surrounding communities have also played a big part in aiding their West Cork Olympians rise to prominence.

‘Every single fundraising event we have held, we have had the support of the local communities,’ Lupton says.

‘Now, we feel good that we are able to give back to our local communities by winning Olympic medals for them. That is just brilliant.

‘The entire local area is delighted for the club and have been dropping into our pop-up shop here in Skibbereen to tell us how they thrilled they are.

‘It is wonderful for all those who have supported us for so long.

‘That is the thing about rowing, it gets into your blood. Anyone who has ever rowed, whenever they pass a lovely river, they say I wish I was out there. That’s a fact. Anyone who ever sat into a scull has that feeling. You want to get into a boat and just be out there. It is hard work but if something is too easy you don’t appreciate it.

‘It takes years and years and miles of water and because it doesn’t come easy, you have a love of rowing for life.’