THINGS are getting very interesting in the county football championships. This is the second year of the revamped championships and as well as being a great success, it’s also very popular with players and fans.

After the past weekend we are now two thirds of the way through the group phase and it’s generating great excitement. Even though there are a lot of repeat games from last year, if anything this is adding to the edge we are seeing, particularly at Premier Senior level where the vast majority of games are going right to the wire and are creating huge tension heading into the final rounds.

The beauty about the new format is that there are no dead-rubber games. Every point you concede is as important as each one you score because score difference will be the deciding factor for many teams come the weekend of October 16th and 17th when we will know the quarter-final line-ups in the various grades, as well as the contenders for the relegation play-offs.

With only 12 club teams now operating at the top grade (Cork Premier SFC) it is a cut-throat championship with no margin for error. Look at Ballincollig, they have lost two championship games by one point to Clonakilty and the Barrs, are out of the championship and now face a war with Ilen Rovers – who had a positive showing against the Barrs last weekend – to avoid finishing bottom of the group and a potential relegation play-off.

After the past weekend both Clonakilty (top of Group C) and Castlehaven (top of Group B) have put themselves in a position to win that prize semi-final spot for the best group winner. Ilen Rovers and Carbery Rangers’ backs are to the wall in an effort to avoid the bottom two positions with Newcestown having their destiny in their own hands in a final round match-up with the Éire Óg.

In Group B last weekend, it was winners against winners and losers versus losers from the opening round of games last month. Castlehaven took on Éire Óg at Enniskeane on Saturday and we were treated to a wide open, topsy-turvy thriller that produced 39 scores and that was after both sides had left numerous opportunities, particularly for goals, behind them. Castlehaven won 2-19 to 2-16, but after the final round of games, will Castlehaven look back on this game and rue the concession of 2-16? Will they also regret electing to fist over the bar on at least five occasions when in one-on-one goal-scoring positions that would have finished this game earlier as a contest and improve their score difference? But winning the game comes first and in the moment as a player you are not going to be thinking of the best group winner’s spot that sends that team directly to the semi-finals. 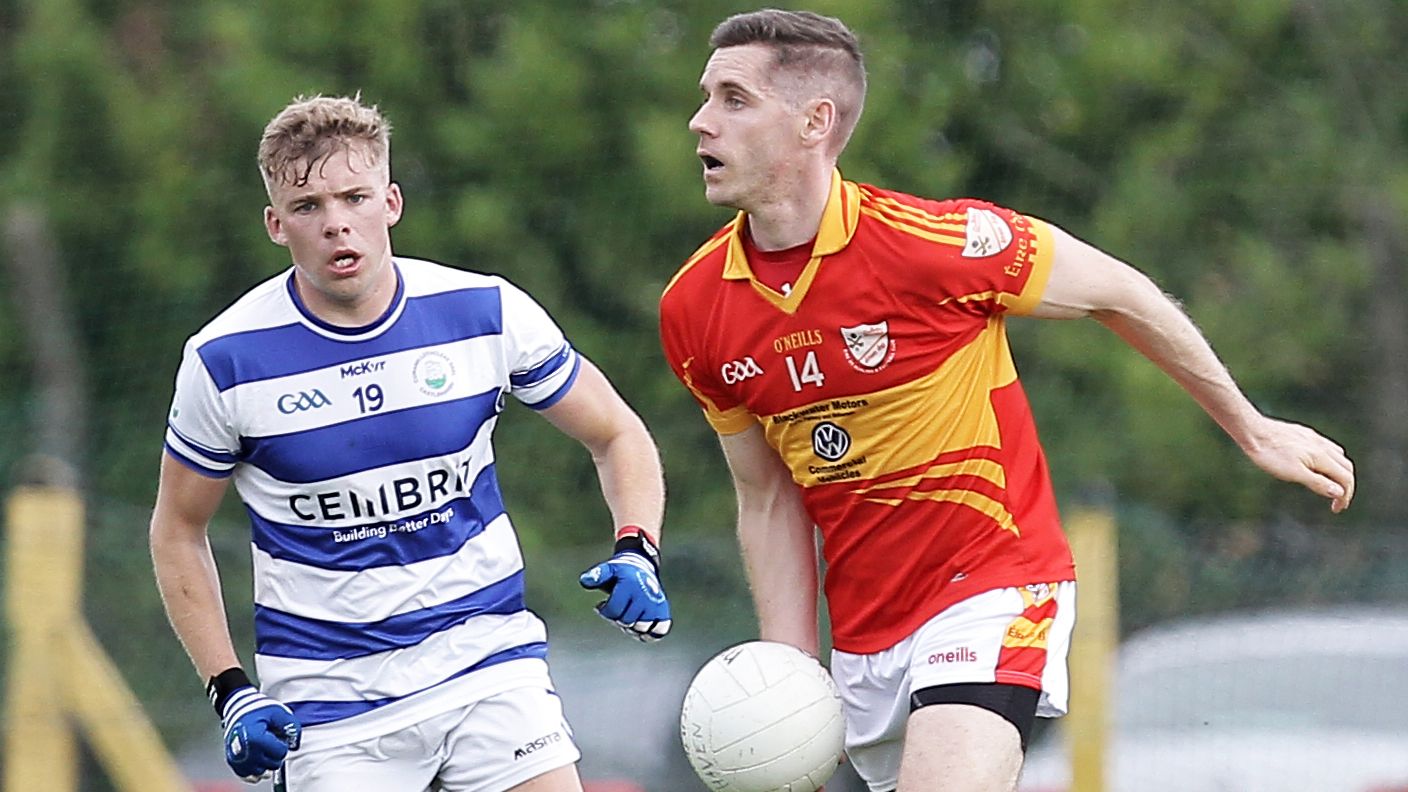 Éire Óg's Daniel Goulding gets his pass way ahead of the challenge from Castlehaven's David Whelton during the Cork Premier SFC round two game at Enniskeane.

Both the Castlehaven and Éire Óg defences looked extremely porous with at least a dozen goal scoring opportunities left behind between them, when the respective defences were run at. Mark Collins was far more prominent in this game for Castlehaven and when the Hurleys, Brian and Michael, got fast and direct ball, Éire Óg’s full-back line was beaten all ends up. It resulted in Éire Óg having to make moves that took from their own playing style; for example John Cooper had to be moved from six back to mark Brian Hurley in their efforts to quell Hurley’s early influence.

This was a crazy game in many ways. Éire Óg got a dream goal start only to find themselves seven down by the first water break. But they won the second quarter eight points to one to go in level. The Mid Cork men lost the third quarter nine points to four and it looked game over, only to get a goal early in the last quarter to put us all on the edge of our seats. Colm O’Callaghan caused Damien Cahalane all kinds of problems and if he had stuck a late chance for a goal this game could easily have swung in their favour. Castlehaven showed all their championship experience to see this one out and if the Hurleys can stay fit and improvements are made in defence they will have a big say in the destiny of the 2021 championship.

In Newcestown on Saturday, Clonakilty and Ballincollig was a far cagier, more defensive affair but highly entertaining at the same time, as Clon won 1-10 to 0-12 to book their place in the knock-out stages with one game to spare. It was great to see Maurice Shanley and Liam O’Donovan return to the fold for Clon. It went well for Liam in his first football game in 15 months, but Maurice Shanley had to retire injured early on after spending the bones of two years in rehab for on-going hamstring issues. Clon looked solid in defence with Gearoid Barry playing as a sweeper and their two midfielders also retreating into defensive positions early inside the 45-metre line. It worked particularly well in the first half but when Ballincollig turned to play with the fall of ground, the early retreat invited the Ballincollig attack onto them and could easily have seen this game going the other way.

Clon are very dependent on Kerry import Dara Ó Sé, who kicked the winning free, in attack and when Liam Jennings put the shackles on him in the second half the scores dried up. Four plays decided this game in Clon’s favour. Sean White’s first-half goal after he had taken a questionable number of steps. Dara Ó Sé’s re-taken free in the first half after Noel Galvin had made efforts to distract him. Daire Dorgan’s free to equalise late on which Mark White pulled down from about two feet over the crossbar. And finally Liam O’Donovan’s wonderful late point where he ran the full length of the pitch showing blinding pace to slot over from 30 yards out. 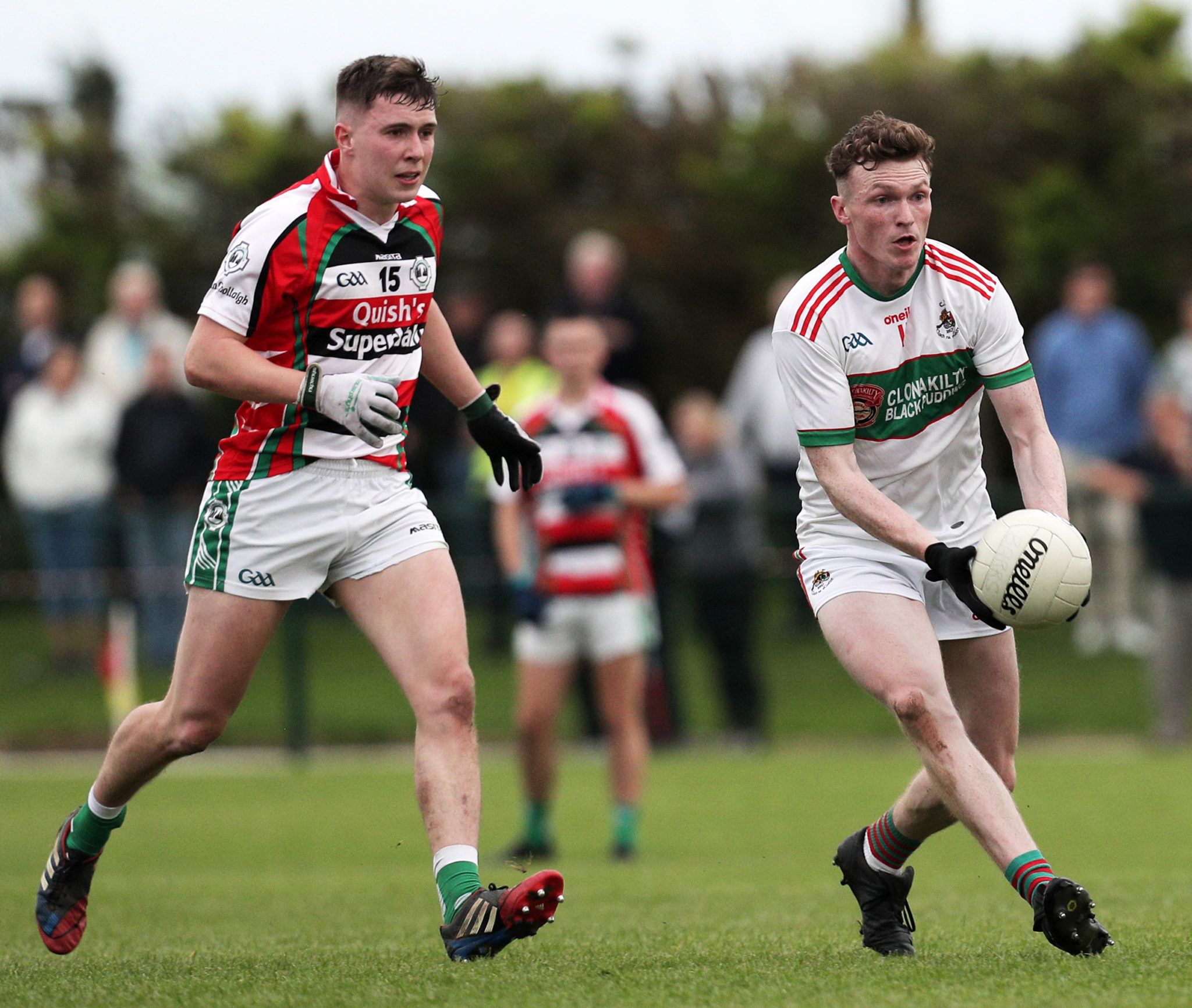 There is no doubt that Clonakilty are making strides in the right direction but they need to find more balance in attack. Can Clon continue to afford the luxury of Thomas Clancy at full back? He was excellent there but almost every one of his forays forward resulted in something positive for Clon. Their midfield proved very competitive but their defensive system, as solid as it was for long stages, still needs tweaking. They will be delighted to have secured a quarter-final spot and now have a free shot at top spot in the group against the Barrs.

The weather turned on Sunday and the expected dogfight between Carbery Rangers and Newcestown materialised. Tadgh Twomey’s injury-time winner, 0-9 to 0-8, left Ross in the unenviable position of having to go to Leap in two weeks’ time to play the Haven staring down the throat of a possible relegation play off if they don’t get something out of the game. Newcestown looked out on their feet with 15 minutes to go, this being their fourth game in successive weeks. Down to 14 after an early red card for Seamus Hayes, Ross will rue a series of late chances that put pay to any chance of further progress in the 2021 championship.

So, after Round 2, Carbery Rangers, Ballincollig, Ilen Rovers and Carrigaline are out of the championship and battling to avoid a relegation play-off. Clon, the Barrs and Castlehaven are through to the quarter-finals and will fight it out for best group winner and a place in the semi-final. All the rest have their destiny in their own hands. Everyone still has something to play for.