AND then there were four – and two of that quartet are from West Cork who have been kept apart in the semi-final draw, increasing the chances of a mouth-watering derby county Premier senior football final.

Quarter-finals weekend recently in the Bons Secours Premier senior football championship didn’t disappoint. St Finbarr’s, Castlehaven and Clonakilty all won to advance to the semi-finals where Douglas, the top team from the group stages, were waiting. The draw sees Castlehaven and Clonakilty kept apart, with Haven taking on the Barrs, and Clon meeting Douglas. A semi-final double header this Sunday, November 14th, awaits at Páirc Uí Chaoimh.

The quarter-finals weekend kicked off with the clash of 2020 Senior A champions Éire Óg and the 2018 senior champions St Finbarr’s. Newcomers Éire Óg can be very proud of their first season at the top table and they look like they may become a future force in the grade. There was no parking the bus on a beautiful sod in the Páirc. Instead, they came out and hit the Barrs with everything they had. Éire Óg led 0-7 to 0-1 after 14 minutes with the Barrs thankful for the arrival of the much-maligned water break on both occasions.

The Barrs were feeling the heat and pushed before half time to bring it back to 0-9 to 0-7 as the battle continued to grow in intensity as the second half matured. It looked like the game might swing Éire Óg’s way when Brian Hayes’ wild tackle on John Cooper led to a straight red with the sides locked at 0-11 apiece, but the arrival of the second water break allowed Paul O’Keeffe and his team a timely opportunity to re-organise.

The mark of champions-in-waiting materialised as Ian Maguire, Colin Lyons and Glenn O’Connor put their shoulders to the wheel allowing Steven Sherlock to display his mercurial talents up front. A criticism of Sherlock when he was playing with Cork was that he lacked pace and his shot selection at times was questionable. He looks leaner, fitter and livelier and his contribution of seven points in the second half had the look of a man on a mission. His left-footed point after the second water break and when he drew two defenders to put a beautifully weighted handpass into space for Enda Dennehy for the clinching goal were his stand-out plays. On this form new Cork manager Keith Ricken will be taking a serious look at Sherlock again.

The Barrs’ final quarter display was power-packed, full of pace, physicality and first-time movement of the ball. They got a serious test here and will learn a lot from it. Éire Óg elected to go short predominantly from their own kick-outs and did very well avoiding the Barrs’ monstrous midfield line of Comyns/Hayes/Maguire and O’Brien. They didn’t vary their own kick-out enough, going long all the time and coming away with a mediocre 60 percent win rate. The Barrs conceded twice as many frees as Éire Óg, giving Daniel Goulding opportunity after opportunity to punish them on the scoreboard. Winning with room for improvement is a great position to be in.

The weather deteriorated substantially for the Sunday in Páirc Uí Chaoimh with the players enduring howling, swirling gales combined with heavy showers. You hear many GAA pundits say that bad weather is a levelling factor for teams but I feel the best and most skilful players always come to the fore the more dire the conditions get. The high-quality surface was a saviour as Mark Collins and the Hurley brothers, Brian and Michael, proved the match winners for Castlehaven, yet again. The terrific trio combined for 1-10 of Castlehaven’s 1-14, as they won by seven points.

The first half was tight and tough with the Haven playing into the hands of Valleys’ massed defence by continually attacking down the centre. Brian Hurley’s sublime footpass to Mark Collins, who had crept in behind the Valleys rearguard, set up the crucial goal that put daylight between the sides at half time. Despite a spirited start by the Innishannon boys in the second half, bringing the deficit back to one, they struggled up front thereafter. The Haven, now deploying more width to their play, opened Valleys at will in the second half. Manager James McCarthy will be delighted with his team’s work-rate as they had double the number of turnovers to Valleys over the hour, however having ten wides will be a concern but conditions had a big part to play in this. 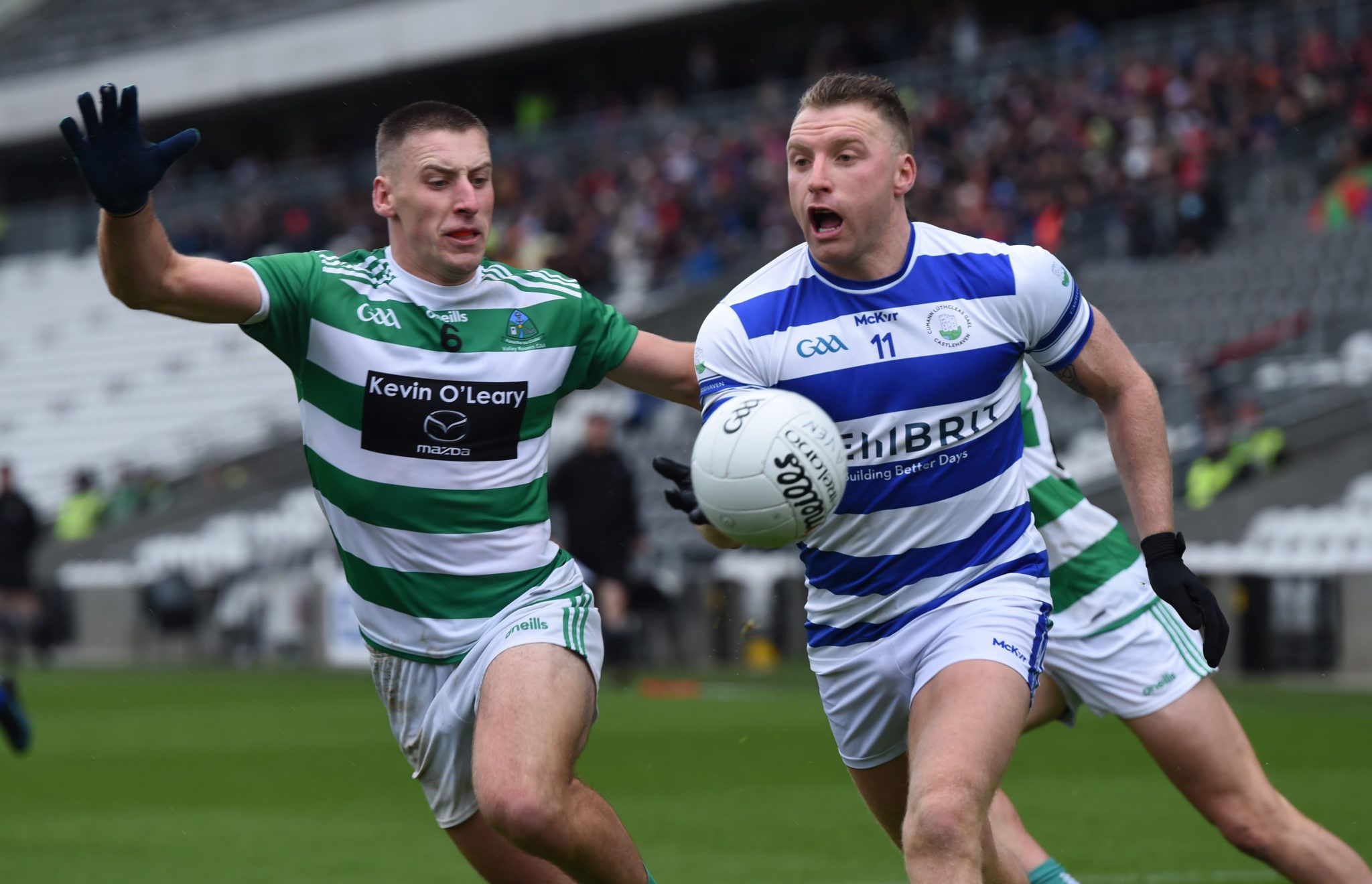 Castlehaven's Brian Hurley on the attack against Valley Rovers.

I had forecast Castlehaven v the Barrs in the county final prior to last weekend but with the new permutations, due to Clonakilty’s victory, we now have a repeat of last year’s epic semi-final that the Haven won on penalties.

The second game of the double-header last Sunday didn’t carry the intensity of the first and was a dour affair for 45 minutes. Clonakilty had lots of possession but were not converting and Duhallow were playing the game on their terms, looking like they could score when they wanted, keeping Clon at arm’s length until after the second water break.

Joe Grimes had a big game for Clon, scoring two points from play and getting fouled for two more frees of his team’s count of six points by the 48th minute. Everybody was waiting for the next gear from Duhallow to curb the Clon fightback late on but their legs just didn’t have it with many of their players having been on club duty on Friday and Saturday.

No doubt every Clonakilty player was met with the intense Haulie O’Neill glare during the second water break. Duhallow were out on their feet. Clon pinned them in their own half with the aid of the gale to score the last seven points in a row, the winner coming from wingback Sean White. This is a huge win for Clon and they now go into a semi-final against Douglas who are equally as inexperienced to life at this stage of the championship. This is going to be a real 50-50 game with the Brewery Town men in with every chance of making the final.

Douglas manager Ray Keating has faced an interesting set of problems in the intervening weeks. There was little or no crossover between their hurlers and footballers but with their hurlers now out, the Cadogans and Shane Kingston, for example, become available. How does he handle this? Will it upset the balance/atmosphere achieved already within the panel? Does he parachute these guys in or hold them in reserve? He can only take 26 to Páirc Uí Chaoimh for the semi-final, that means four or five guys who have been training all year could miss out. The handling of this series of issues could be the determining factor in their further progression.

I originally had tipped a Castlehaven v Barrs final but that’s now gone out the window. The Barrs are still my favourites but don’t rule out a Clonakilty v Castlehaven final at this stage.