Darren McCarthy of Ballymartle, in possession, keeps his eye on the ball as Dave Noonan, Glen Rovers, at Pairc Ui Rinn during their sides' senior hurling championship first round clash on Saturday last. 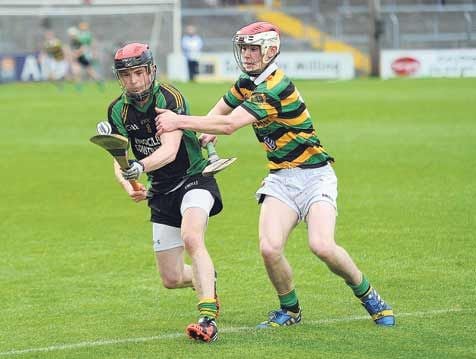 Darren McCarthy of Ballymartle, in possession, keeps his eye on the ball as Dave Noonan, Glen Rovers, at Pairc Ui Rinn during their sides’ senior hurling championship first round clash on Saturday last.

THEY have reached the quarter-finals for the last four seasons, making it to the semi-finals in 2012 and 2013, but perhaps Ballymartle’s victory over Glen Rovers in the opening round of the county SHC at Pairc Ui Rinn last Saturday evening tasted as sweet as any they have achieved since stepping up to the top flight in 2011.

Ousted by the Glen last year, it seemed as if the Riverstick men were destined to fall short again after they finished the first half 0-16 to 0-9 in arrears, with Patrick Horgan and Conor Dorris inflicting the bulk of the damage for last year’s defeated finalists before the break.

Apart from their problems at the back, Ballymartle struggled to make headway up front following a tentative opening quarter during which Jack Dwyer and, to a lesser extent, Jamie Dwyer carried the main threat for the South-East side.

Jack Dwyer, winning an abundance of aerial possession, continued to make his presence felt as the first half progressed, but even his impact was curtailed by Alan O’Donovan after the Glen switched their wing backs nearing half time.

So widespread were Ballymartle’s problems that they looked a beaten docket at the interval, notwithstanding the commendable comeback they had produced when in a similar situation against Blackrock in a fourth round tie last year.

They had staged another stirring recovery to get within a whisker of claiming the Glen’s scalp after that, but there appeared to be little danger that the city side would be forced to relinquish the initiative this time.

With 45 minutes gone, Ballymartle – denied a badly-needed boost shortly after the restart when Darren McCarthy, placed by Brian Corry, shot narrowly wide with a clear-cut goal chance – had failed to make significant inroads on the deficit, although they were clearly shaping up a lot better following a half-time reshuffle.

McCarthy, unable to make an impact at midfield, was certainly posing problems for the Glen rearguard after being switched to left half forward, while Corry was more involved as well after going from there to the ’40.

In addition, their new midfield pairing of Barry Dwyer and substitute Seamus Corry gave them a stronger hand in this sector, while Jack Dwyer, their most consistent performer overall, was going great guns again at right wing forward.

The latter posted a sublime point to make 0-19 to 0-14 in the 46th minute before substitute Johnny Wallace, fed by Barry Dwyer, goaled a minute later to throw the issue wide open.

After Darren McCarthy quickly cut the gap to the minimum from a free, the Glen responded with points from impressive substitute Shane Kennifick and Conor Dorris to go three ahead with three minutes of regulation time remaining. Ballymartle – with Liam Corry, Patrick Dwyer and Rickard Cahalane, who comprised a dominant half back line in the last quarter, powering them forward – weren’t finished yet, however, and their never-say-die attitude was rewarded when they hit the front, courtesy of a spectacular goal from Darren McCarthy in the 59th minute.

Gaining possession about 40 metres out on the right wing, McCarthy, outstanding in the second half, completed a powerful run with a stunning strike to the far corner of the net, adding a point from a ’65 in stoppage time to seal a truly memorable triumph for Ballymartle.