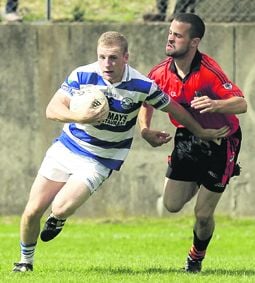 Big loss: Castlehaven’s Michael Hurley, in action against St Colum’s last Sunday, will miss Sunday’s JAFC semi-final if he plays for the Haven seniors on Saturday in the Cork SFC.

THE sleeping giants of West Cork junior A football, Bandon, have done all that was asked of them this season and are now rated as favourites for this year’s championship title.

This Sunday evening Bandon take on Castlehaven in the second semi-final of this year’s competition, to be played in Rosscarbery at 6.30pm, with the winner to play Kilmacabea in the final on September 13th.

Bandon’s cracking first-round win over St Colum’s, 1-10 to 1-9, was probably the catalyst that got their footballers going early this year and in the third round they scored a big win over dark horses, Diarmuid Ó Mathúna, 1-17 to 0-8.

Scoring hero and man-of-the-match in both those games was Cork player Mark Sugrue, and he was again the outstanding star when they accounted in the quarter-final for last year’s beaten finalist, Gabriel Rangers, 2-10 to 0-10.

There is no doubt that there is a determination about the Bandon footballers this year that we don’t always see, especially now that they are gone from the intermediate hurling.

Last season they lost very tamely to St Mary’s in the semi-final. The Lilywhites have been very solid fore and aft in all games with experienced goalkeeper Pat Prendergast well protected by Kevin Lucey, Brian Crowley and Mark Prendergast in defence.

Donagh Lucey and James Walsh are a formidable midfield pairing while, up front, Mark Sugrue is the big threat with good support from Darren Crowley, veteran Alan Johnson and strong full forward Barry Collins. But it is the overall balance of the Bandon team that makes them so formidable this season.

Castlehaven have been the surprise packets in the championship with some very impressive performances, despite the changeover in players for all games.

Midfield star Daniel Hegarty kicked 1-1 in their first-round victory over champions St Mary’s, 1-10 to 0-11, with Mike Dineen outstanding also at midfield. Dineen was missing for the third round clash with St James but the haven still triumphed by 1-13 to 2-6.

Last weekend they took on St Colum’s in the quarter-final and back in action after many months out through injury was Michael Hurley. He was a revelation, although missing a penalty, scoring four points and, again, Daniel Hegarty was in marvellous form at midfield, kicking the only goal in a 1-12 to 0-9 victory.

Colum’s were devastated by injuries for this encounter but that took little from a superb Haven performance. As well as Hurley and Hegarty, they had fine performers in goalkeeper Paudie Hurley, Diarmuid Shanahan, Liam Collins, Alan Cahalane, Conor Cahalane and Conor Maguire.

Prediction: Much will depend on how many of the present Haven juniors will be promoted to the senior team this Saturday for the clash against St Finbarr’s.

One can take it that their top forward Michael Hurley will replace his suspended brother, Brian, and he will be a big loss. Goalkeeper Paudie Hurley is also due to step up and maybe one or two others. That should firmly tilt the scales in favour of the Bandon side, with Mark Sugrue again being the vital man for the Lilywhites.