STEVEN McCarthy is living a football dream in England – but it’s not the one he was originally chasing.

His journey from the 16-year-old boy who left Skibbereen to join Sunderland’s Academy in the summer of 2012 to the 26-year-old who is now a Senior Business Development Executive at Newcastle United FC is a remarkable one.

When he left West Cork ten years ago, the ambition was to become a professional footballer. His move to Sunderland was the stuff of dreams. He was the pride of his hometown, the local lad – the son of an O’Donovan Rossa and Cork football legend, the late ‘Small’ Mick McCarthy – who was putting Skibbereen soccer on the map.

Steven McCarthy was right to dream big. He was hand-picked by Sunderland, then a Premier League club. They wanted him. The potential riches were huge. This is what he had worked for. It’s what he wanted, too.

‘I enjoyed every minute of it. It was a brilliant experience. It’s a rollercoaster of a ride when you go over there because you are so young and you are dealing with so many emotions, ups and downs,’ he told The Star Sport Podcast.

‘When I was there I picked up plenty of injuries. The most difficult thing is not having your family support there. You are coming from Ireland where you are considered as one of the best because you are over in England, but then you are over there and you’re with the best in the North East and some of the best players in England, and it’s a different ball game.

‘It had its ups and downs but it definitely shaped me as a person. Because it is such a competitive environment you learn a lot of lessons, especially at a young age. When I reflect back on it now, it was definitely a positive because of the resilience you have to build to play at that level.’

Two years after leaving, McCarthy was back home in Skibbereen, trying to figure out his next move. He was only 18 years old but already at a crossroads in his football career. Injuries dogged his time at Sunderland, especially an ankle injury he suffered at the end of his first season in North East England that held him back for a huge chunk of his second year there. Mentally, it was a hard knock to deal with because he knew his window to impress – and earn a new contract – was closing. He just never got the run of games he wanted to show them what he could do.

‘I think the ankle injury was a big factor in it, but reflecting back there were other things that I can look back on now, in terms of my mental strength going over,’ he says.

‘You have to realise that you are a young lad going over and the English lads have been involved in the Academy from such a young age. There is support there for them from the very beginning and these guys are well ahead of you, both in ability probably and also mentally because they had the best of training, the best facilities and they also had all the support of a Premier League club like Sunderland was at the time. The minute you get into the club you are catching up. You only have two years to catch them and it is difficult.’ 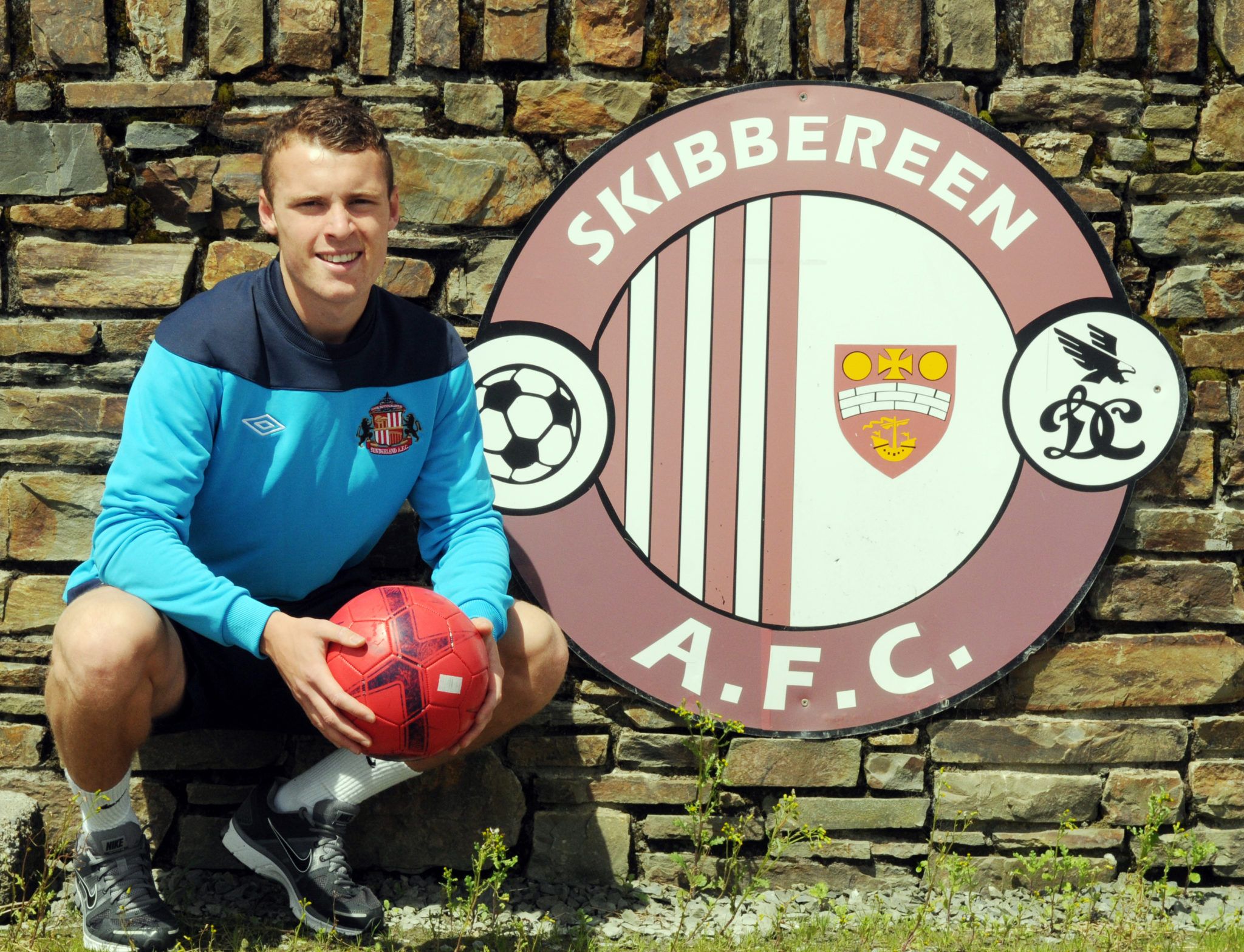 Steven McCarthy put Skibbereen AFC on the map when he joined Sunderland in 2012.

The former Republic of Ireland underage striker doesn’t regret his time with Sunderland. He lived the dream for two years and it was an opportunity he couldn’t refuse. But returning home to West Cork in 2014 was never part of the plan when he had left two summers earlier. His dream had been taken away and he didn’t know where to turn next.

‘To be honest it was a very difficult time. I think people underestimate how challenging that is, that rejection you get,’ he says.

‘People forget that you are only an 18-year-old lad and you are going into manhood at that age and you are trying to figure yourself out, but the key thing is that football was my identity at the time. I was a soccer player playing with Sunderland and that’s all I had in my mind.

‘I know they drill into you at the academy that you have to have a Plan B in case you don’t make it, but you are just a kid. The last thing you want to hear is that you are not making it and the only option is “I am going to be a professional footballer”.

‘The hard part was losing that identity and figuring out what the hell I will do next? I came back to Ireland, I trained with Cork City (at the end of 2014) and then moved on to play with Cobh Ramblers (in 2015) but I still wasn’t right, my confidence was shot.

‘All that experience of the hardship of getting the rejection and coming back, you do think that people are talking about you and all that sort of stuff. It is difficult for a young lad. Did all that disrupt my passion for the game? I would say it definitely did have an impact.’

McCarthy’s passion for football never recovered. He could feel it being stripped away. He wasn’t enjoying football as much. Contrast that with the Skibbereen AFC prodigy who did everything he could to improve on the way up and to earn the contract with Sunderland.

‘When I came back home that passion and motivation wasn't there. If I can’t put everything into what I am doing and I am not passionate about it, I am not going to enjoy it and I’m not going to have fun,’ he explains. His family was an incredible support as he tried to figure out what was next.

‘Although it was such a negative experience at the time, I look back at it now as a positive because it made me stronger, more resilient, more driven and motivated in what my profession is now. I think I matured very quickly in those moments where you are battling with yourself almost, as to where do I go next?’ he says.

‘Once I found the route for my other passions, that’s where I came out the end of that negative spell. It is a difficult time because you are questioning everything about yourself. It’s a question of rebuilding yourself. Luckily for me, it was only a year of that self doubt and that figuring-out process.’

McCarthy, encouraged by home, then chose a different path. He wanted to get an education. He wanted a Plan B. His research into a sports management course took him back to the north east of England, and to Northumbria University in Newcastle on a scholarship. He felt it was the right move for him. He studied Sports Business and Management and also lined out for the university team. The Skibb man fell in love with the university, his course and the city and all its trappings. He also enjoyed his football again.

‘Going to university showed me a different life altogether,’ he explains.

‘When I was at Sunderland I was in a bubble. It was football, football, football. But when I went to university and had the student life, it was more enjoyable. I was going to university, I was playing football, I could go out for a drink and I met some great people. It showed me a different life and it gave me different goals. I went into sport in a different way, in a business way, and that got me excited and I felt the passion.’

McCarthy moved to Newcastle in 2015 and he is still there, now working as a Senior Business Development Executive at Newcastle United FC. In between university and his new job, the West Cork man impressed many as, first, commercial executive and then sponsorship manager at Newcastle Racecourse. One idea, a student race night, was a runaway success with over 4,000 students bringing noise, colour and life to the course. With his impressive work noticed by Premier League sleeping giants Newcastle United, he is now working for a club that was taken over by a Saudi-led consortium in October 2021.

In a city he now calls home, he is in a job he loves as it combines two of his passions, sports business and management and football. A journey that started ten years ago with one dream now sees him living another one. And the hard knocks he shipped along the way have played their part, too.