A cracking opening period saw the sides level at 0-2 apiece until Cork senior Damien Gore floated over two consecutive points to edge Kilmacabea ahead. St Mary’s then completely dominated the second quarter, held their opponents scoreless for 17 minutes and led 1-7 to 0-5 at the interval.

The reigning champions underlined their quality by outscoring St Mary’s 1-5 to 0-1 in the third quarter. Indiscipline cost Kilmacabea dearly, however, with Joe Collins receiving his marching orders (two yellow cards) before being joined on the side-lines by black-carded duo Colin McCarthy and Donie O’Donovan.

Down to 12 players at one juncture, Kilmacabea were made to pay for their repeated misdemeanours as a hungry and determined St Mary’s took full advantage.

The eventual winners were still two points behind when the clock reached 69 minutes. Once again, Kilmacabea gave referee Ian McCarthy another decision to make and St Mary’s were awarded a penalty. Up stepped centre-forward Brian McCarthy to guide the ball into the bottom corner with the last kick of a memorable game.

‘That was a great performance and great work-rate from the lads,’ St.Mary’s manager Conor Creedon said.

‘Look, the scoreboard is all that matters at the end. The lads worked their way through the last few minutes and didn’t panic. We got our chance, took it and it was well deserved. 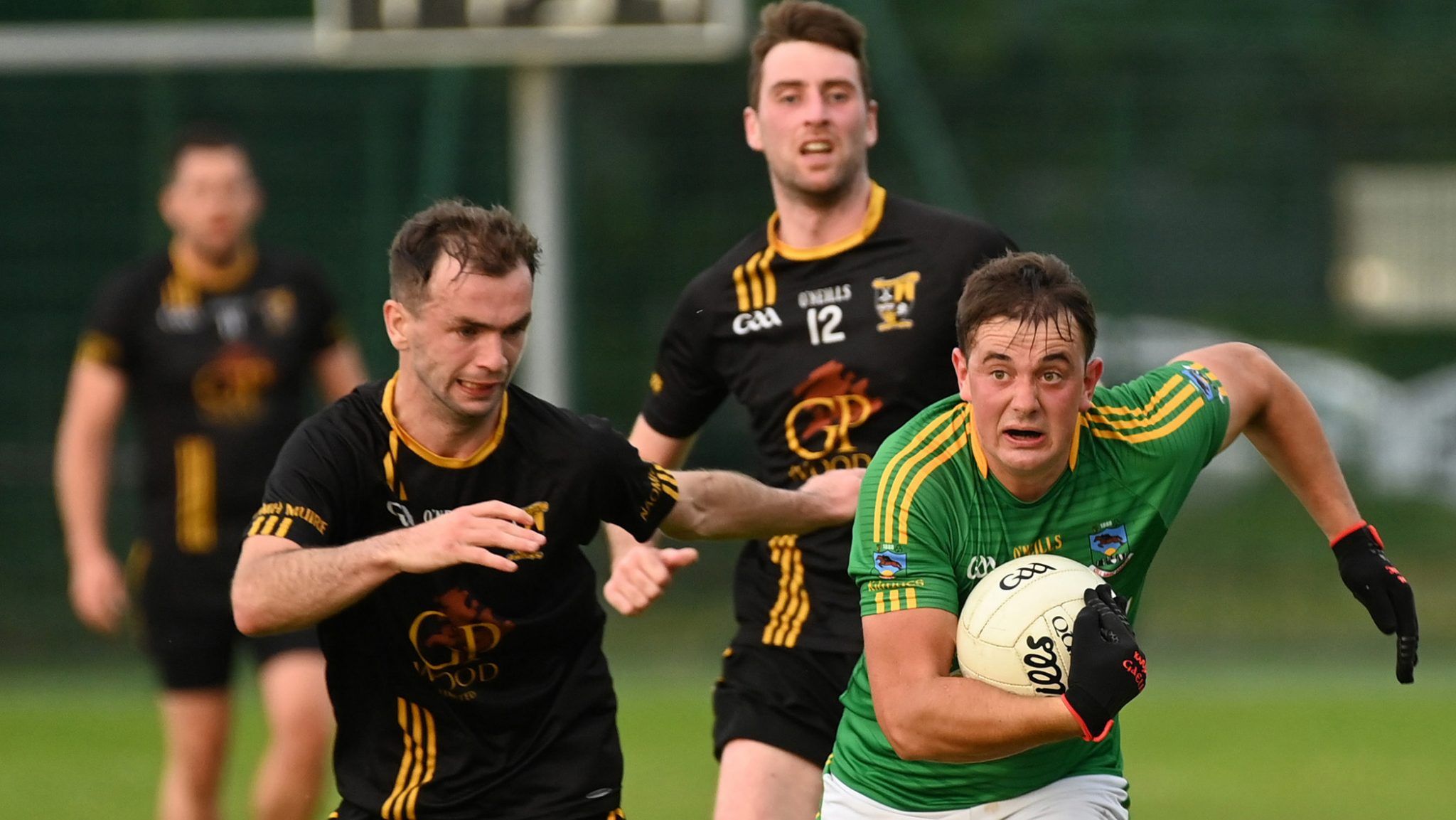 ‘It is never easy against Kilmacabea. We know they are an outstanding team. We asked for nothing but work-rate from our fellas tonight, to stay with them and be in the game until the last quarter. That was our target and to go for it from there.’

Daniel O’Donovan and Richie O’Sullivan (mark) exchanged points with the Saints’ Rory O’Connor and Brian McCarthy during a high-octane start. Cork footballer Damien Gore had a superb battle with Peter Daly throughout the evening but managed two points to edge Kilmac 0-4 to 0-2 ahead at the first water break.

St Mary’s upped the tempo for the remainder of the opening half, holding their opponents to one more point and building a 1-7 to 0-5 interval advantage. A marvellous four-man move ended with Darren O’Donovan firing to the net after 16 minutes. Kilmacabea were struggling to contain their opponents and conceded three quick-fire points as Brian McCarthy, Darren O’Donovan and Niall Kelleher found their range. A converted Chris Daly free made it 1-6 to 0-4 prior Damien Gore ending a 17-minute Kilmacabea drought. Another converted Daly free brought the first half to a close.

The introduction of Ian Jennings and Dan Lynch had the desired effect as Kilmacabea turned the tables on their opponents at the start of the second half. Lynch, Jennings and Gore (free) scores reduced the deficit before the Cork senior footballer thundered an outrageous right-footed shot into the top corner to level the score at 1-8 apiece.

Chris Daly and Gore exchanged frees during a wild spell in which Ian Jennings rattled a crossbar and St Mary’s Niall Kelleher had two goal-bound shots saved by Matthew O’Neill. Joe Collins’ second yellow card reduced Kilmacabea’s numbers but a Donnacha McCarthy point made it 1-10 to 1-8 with 10 minutes to go.

Despite their numerical disadvantage, Kilmacabea dug deep and late Damien Gore and Daniel O’Donovan (free) efforts looked to have won it for the defending champions. Brian McCarthy had other ideas, however, and his converted penalty, nine minutes into injury-time, earned St. Mary’s a sensational one-point victory.

‘Brian has been doing that all year,’ Conor Condon said. ‘There is never any panic with him and it was a well-struck penalty. We have nothing won but this will give us a great boost going forward and a bit of belief.’