Making a splash: Skibbereen brothers Gary and Paul O'Donovan will compete together in the Irish lightweight double at the European Rowing Championships this weekend. 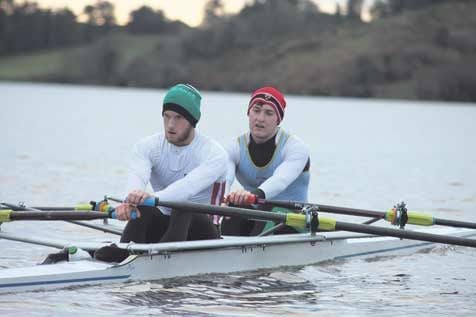 Making a splash: Skibbereen brothers Gary and Paul O’Donovan will compete together in the Irish lightweight double at the European Rowing Championships this weekend.

Shane and Mark ready to test the water

WHAT’S new is wonderful, and while also quite daunting, Skibbereen duo Shane O’Driscoll and Mark O’Donovan are looking to make their mark at the European Rowing Championships.

The Skibb men are part of the newly-formed Irish lightweight four crew that will use this weekend’s event to see where they stand in the grand scheme of things – with one eye on the world championships, and Olympic qualification, in France in late August.

Trials for this lightweight four crew began last November and it was an intense process, as over 30 rowers were whittled down to four after over a dozen races.

Shane and Mark are joined by Anthony English and Micheál Bailey in what is the newest Irish crew on the scene, and they started training in earnest just in March.

‘We are just testing the waters really because we are a new crew and we haven’t had many races together,’ Shane (22) explained.

‘There is a big entry for this weekend but we are focussing on our own boat to try and get a rhythm going. If we were established with a year or two we would have a better idea as to where we stand, but we’re a new crew so there’s an element of the unknown here. ‘For us it’s about seeing how we get on in the Europeans and see where that takes us for the summer.’

O’Driscoll, who raced at the world U23 championships last year, has now gone from scull to sweep, and this will be his first international regatta as a sweep in about three years.

With the world championships later in the year offering a route to next year’s Olympics Games in Rio, O’Driscoll is hoping that this new crew can return Ireland to the top tier of lightweight fours.

‘The more time we spend together the more we will progress,’ Shane said.

SPEED is the name of the game for Denise Walsh ahead of this weekend’s European Rowing Championships in Poznan.

A member of Skibbereen Rowing Club, Denise (22) will partner Dublin’s Claire Lambe in the Irish lightweight women’s double, with the duo keen to show how much they have improved since the Piediluco International Regatta held in Italy in April.

That weekend Denise and Claire won a bronze medal, and then it was straight into a 10-day training camp, also in Italy, before a return to the National Rowing Centre in Inniscarra where training has continued ahead of this weekend’s Europeans.

‘We were happy enough with the Piedliuco regatta but we have put on a lot of speed since then,’ Denise said, explaining that rowing is a sport of fine margins where every second counts.

‘Training has gone very well in the last few weeks, in the training camp just after that regatta and since we got back to Inniscarra. We had some testing lately and it showed that we’re improving further and that we’ve more speed.

‘We’ve worked a lot on the more technical aspects of rowing, myself and Claire are rowing better together – that comes with practice and hours on the water – and we’ve improved a lot of the bits around the edges. On top of that we are doing a lot more race prep for the Europeans compared to what we did for Italy.’

Denise and Claire have set their sights high for the Europeans, as the Skibbereen woman added: ‘This will be very tough but we are aiming for an A final. We want to make the next step from our last competition.’

This will be Denise’s first senior European Rowing Championships and there’s the added incentive that if the lightweight double can get to the A final in Poznan, it will help with their funding.

It will also set them up then for the senior world championships in Aiguebelette in France at the end of August, which double up as the Olympic qualifiers. A top 11 finish there is the golden ticket through to the Olympics in Rio next year.

SKIBBEREEN brothers Gary and Paul O’Donovan have their sights set on the bigger picture.

The duo will compete together in the Irish lightweight men’s double at this weekend’s European Rowing Championships in Poland, but a less-than-ideal build-up means that the Lisheen brothers are using this event for experience – and everything after that is a bonus.

Gary (22) has just finished his exams in Cork IT where he is a final-year marketing student, while younger brother Paul, a third year physiotherapy student in UCD, is back home in West Cork for the summer.

It means that they can now fully focus on rowing for the summer, starting with the Europeans this weekend, but more realistic targets are the World Cup event in Switzerland and, especially, the world senior championships in France in August where Olympic qualification is up for grabs – the top 11 here qualify for Rio.

‘The Europeans might come a bit too early for us because we’re just finished up college,’ Paul explained.

‘I was in Dublin, Gary was in Cork, and we weren’t able to dedicate the time to it together that we wanted to. But we have a clear summer ahead of us now and we’ll, hopefully, be in a better position come the world championships.

‘When you consider that we might not have the training done together that other crews team, we’re going well.’

Gary agrees. The time spent training together now will help them find time and speed. Considering that at the Piediluco International Regatta in early April – their first time racing together in the lightweight double – the Skibbereen Rowing Club duo finished with the third fastest time, despite missing out on the A final (top two crews advanced from heats), it points to an exciting few months ahead.

The Portugese double that finished ahead of them in Italy, who had finished fifth in the last Olympics, went on to win silver in a recent World Cup regatta, so the Skibb pair know they’re not far off the pace, and with a lot more to come.

‘If we can get into the top six in Poland that would be brilliant,’ Gary said.

‘It’s tiny margins we are dealing with, and a second and a half could be the difference between coming in the top six or coming tenth. It’s immensely tight when you can fit ten boats into the space of a second. If we can come out of the right side of that second, it would be fantastic.’

Gary also explains that this is a process for the lightweight double. They are taking it race by race, trying to learn as much as they can in each event, as they are playing catch-up in comparison to their international competitors who have been together for several years.

Gary and Paul were paired together last October, and haven’t been able to fully dedicate yet because of college commitments, but it’s full steam ahead now, and they will train in Skibbereen and at the National Rowing Centre.

The background story to how they were picked to race together came around last year when the more-experienced Paul, who finished fourth in the lightweight single sculls at the senior world rowing championships in Amsterdam last August, decided to turn to the double scull because there is no lightweight single scull in the Olympics.

‘The options open to the highly-rated Paul were the double or the four. Preferring the two oars, like in the single scull, he opted for the double. In Ireland trials last October the West Cork brothers finished first and second, and a new crew was created.

‘Paul has this world of experience on the international stage so it’s good for me to be able to tap into his knowledge. I listen to him as much as I can. He knows what to do, how to do it and where to get speed from because he’s done it before,’ explained Gary, who also added that they have raced together in the past.

Paul added: ‘The fact we’re brothers helps. We know each other’s form so we won’t fall out. We can let each other know what we think of things, whether it’s good, bad or indifferent, and not to have to worry that the other fella is touchy.’