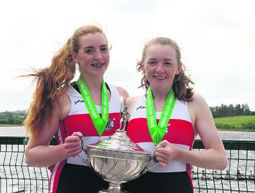 SKIBBEREEN Rowing Club athletes warmed up for the national championships by dominating the final regatta of the 2015 Grand League series, held at the National Rowing Centre in Farran Woods.

Niamh, Aoife, Emily and Ellen went on to compete in the women’s junior four. Although in third position after 500 metres, the girls pushed through to row to victory by a comfortable margin.

Niamh and Ellen were also victorious in the women’s junior 18 pair.

Aoife, Emily, Louise and Lydia formed the women’s junior 18 quadscull. It took a big push from the Skibbereen crew to get past the Lee crew at the halfway mark but once they got ahead, they extended their lead to win by nine seconds.

Aoife and Emily were the fastest women’s double of the day, winning the division one category, while the junior 18 scull was easily won by Emily Hegarty.

The senior men also put in some good performances over the weekend. The men’s coxed club four of Jake McCarthy, Naoise Kennedy, Rory O’Neill and Kealan Mannix, coxed by John Whooley, had seven seconds to spare over St Michael’s Rowing Club, who finished in second place.

Shane O’Driscoll and Mark O’Donovan were winners of the senior pair with Kenneth McCarthy and Murray Connolly finishing in third place.

The men’s division one single scull was dominated by Skibbereen scullers. Paul O’Donovan was the fastest in a time of 6.55 with Gary O’Donovan finishing in second place. Erik Rowan finished third with Justin Ryan close behind in fifth position. Paul and Gary also showed their class in the men’s double scull.

Athletes have now settled back into training ahead of the National Rowing Championships, which will take place in two weeks’ time.