David Brosnan of St Nick's being tackled by Eoin Lavers of Dohenys in the drawn game last Saturday evening. 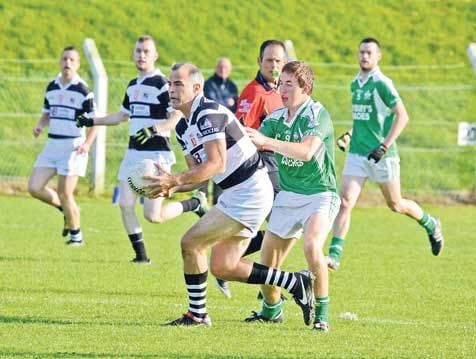 David Brosnan of St Nick’s being tackled by Eoin Lavers of Dohenys in the drawn game last Saturday evening.

IT’S second chance saloon for Dohenys senior footballers when they take on St Nick’s in the replay of their fourth round senior football championship game in Bandon on Sunday next.

A week ago Dohenys had the game in the palm of their hand when they led by four points after a blistering start, and by five points in the third quarter, only to find themselves trailing by a point with minutes to go. Showing great courage, they battled their way back to take the lead as the game entered injury time, but there was disappointment as they allowed Nick’s to grab an equalising point deep into injury time.

‘Overall we were very pleased with our performance,’ said Doheny mentor Brian Herlihy during the week. ‘We got off to a great start and used the ball very well, but we knew we couldn’t keep that going for the full hour against a tough side like Nick’s. They were bound to have their dominant period and when they drew us into a physical battle we were in trouble.

‘We had warned the players about taking the ball into tackles against stronger players, but it’s hard to stay away from them all the time. They did turn over a lot of possession and that’s something we’ll be working hard to rectify on Sunday.

‘We’ve played Nick’s four times now and there has never been more than a score between us. I have the greatest admiration for them, the way they survive every year, the way they play the game and everything is forgotten afterwards and left on the pitch.

‘I thought it was a very good game of football the last day, no massed defending or any of that, just good, honest football. But it was hard going on the nerves there at the end.

‘I’ve been involved with Cork a long time at different grades, but there’s something totally different about your own club team. It can be nerve-wracking on the sideline.

‘We’re happy enough to be playing again on Sunday, to get it out of the way. Some of the lads were hurling with the U21s last (Monday) night and, hopefully, they will all be okay. We haven’t any injuries after the drawn game and we’re delighted to be still in contention. We’ll see how it goes on Sunday.’

If Dohenys want to win this replay, they will have to avoid being drawn into a physical battle against a much stronger Blackpool side and they will have to use their pace and ball skills, which they have in abundance.

Running the ball into tackles won’t win this game and they will also have to be wary of the high ball in around the square which resulted in two goals for Nick’s in the drawn game, one, fortunately for Dohenys, disallowed. The backs will also have to keep a tight rein on ace scorer, Evan Kearney, and the strong Dean Brosnan on the forty.

Dohenys failed to raise a green flag in the drawn game – see report on page 7 – but one feels they might have to produce at least one in the replay if they want to advance to the quarter final of the county.