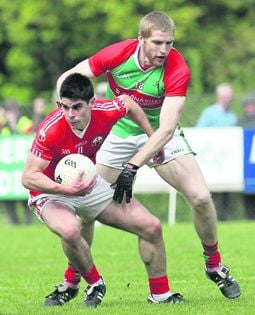 In flying form: O’Donovan Rossa’s top scorer Kevin Davis is challenged by Clonakilty’s Pa O’Sullivan during the Cork SFC round two game at Rosscarbery in late May. Davis scored 1-5 in Skibb’s win.

THE first-round senior championship loss to Bishopstown 17 weeks ago was the turning point in O’Donovan Rossas’ season, according to manager Shane Crowley.

Back in early May the Skibb side lost 2-14 to 2-11 against the city slickers in Clonakilty, but lessons were learned that day.

The Rossas regrouped and have bounced back with wins against Clonakilty (2-15 to 0-10) and Beara (2-11 to 0-7) to set-up a quarter-final against Bishopstown this Saturday evening in Dunmanway, at 6.45pm.

‘We are in a better place now then we were back in May when they beat us,’ Crowley said.

‘The big lesson that day was that without work-rate then you’re not going to win many games, especially against teams of the calibre of Bishopstown.

‘Around the middle eight our work-rate wasn’t what it needed to be and we struggled. Definitely we learned that without honest endeavour and work-rate we are going nowhere.

‘We showed against Clon, Beara and in a few Kelleher Shield games that when our work-rate is there we are as good as any team out there. But if that drops then we do fall down, and our system will suffer as a result, so all the players need to work hard on Saturday.’

Level on points with Castlehaven at the summit of the Kelleher Shield, the Skibbereen side is moving in the right direction, but they will be without both Alan Tanner (ankle injury) and Owen Collins (hamstring injury) for Saturday night’s quarter-final.

Better equipped now for the challenge of Bishopstown, Rossas look stronger in defence, Donal Óg Hodnett has made a big impact since his move to midfield while Kevin Davis is in great form, shown by his 1-5 in the win against Beara. The Skibbereen side is in good health at the right time of the season, with fierce competition for places.

‘Guys are in good form. It’s important that the key players do play well, like Kevin Davis, Conor McCarthy, Donal Óg, and we do need performances from these guys day-in day-out because other players respond to that,’ Crowley said.

While momentum is building in West Cork, Crowley doesn’t need to be reminded just how good Bishopstown are. The defeat in May is Case A. Bishopstown’s win (1-9 to 0-8) against Clyda Rovers in round four last weekend is Case B.

‘Clyda play to a system and Bishopstown did find it hard to break them down at times, but they had Plan B in bringing Denis Crowley on and they could float high balls into him. They have different options,’ Shane Crowley pointed out.

‘Nobody beats Clyda well but Bishopstown always looked like they were going to win, and if they were a bit more accurate they could have won by a lot more.’

Having crossed swords with Bishopstown already in this championship, Crowley also knows where their strengths lie – the same can be said for the city men.

‘We’d be fools not to be cognisant of Fiachra Ó Deasunaigh and Sam Oakes up in the full-forward line. They took us to the cleaners the first day; they got 1-11 between the two of them. We’ve got to watch them,’ the Skibb manager said.

‘Bishopstown are very fluid and strong around the middle eight. A lot goes through Conor Dorman and Jamie O’Sullivan is a powerful centre back so we know where their strengths are.’

There’s no doubt that O’Donovan Rossa are in better form now than in May, and how Kevin Davis (1-10 in his last two championship games), Dave Shannon, Rob Long, Paudie Crowley and Thomas Hegarty fare in the attack will be crucial, as will the influence of Donal Óg Hodnett in midfield against the Town pairing of Conor Dorman and Mark O’Driscoll.

The Skibb attack has scored consistently high in the three championship games – 2-11 v Bishopstown, 2-15 v Clon, 2-11 v Beara – and more of the same will be needed on Saturday. They’re also second top scorers in the Kelleher Shield.

Prediction: 2014 semi-finalists Bishopstown will be favourites to win going on past form and they have a greater presence of inter-county players (O’Halloran, O’Sullivan, Dorman), but Rossa learned lessons from that defeat in May and look a better balanced team now than that day. Still, Bishopstown get a tentative nod to progress to the semi-finals, unless Skibb find the next gear.