Having fun: Tadhg MacCarthaigh's U15s were involved in one of the games of the day. 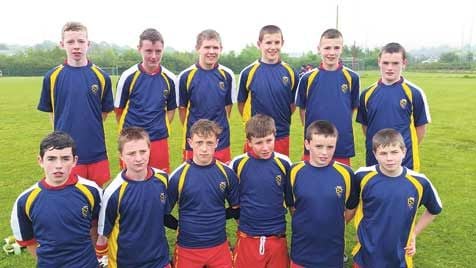 Having fun: Tadhg MacCarthaigh’s U15s were involved in one of the games of the day.

CARBERY Rangers and Sam Maguires have advanced to the Munster finals of the U15 football Super Touch 10-a-side competition following an exciting day of action in O’Donovan Rossa GAA grounds last Saturday.

This Munster competition was held in every county last Saturday with the group stages taking place in different venues around the province.

Two teams from the games in Skibbereen, where nine clubs took part, qualified for the Munster finals which are on in Mallow on June 13th. The teams that were participating were O’Donovan Rossa, Carbery Rangers, Ilen Rovers, Kilmeen, Ballingeary, Ahán Gaels, St Colum’s, Tadgh MacCarthaigh and Sam Maguries, who had two teams.

A team was made up of ten players with a panel of 12. Each team played three games in groups of four and two games if you were in a group of three.

There were some outstanding games played with not much between each team, with the match between O’Donovan Rossa and Tadgh MacCarthaigh going to extra time and only one score separated them at the end.

The four teams that came out of their groups were Sam Maguries, O’Donovan Rossa, Ballingeary and Carbery Rangers.

The two teams that went through the finals in Mallow were Carbery Rangers and Sam Maguries. This is a great competition for players of this age at this time of year, with all players getting plenty of game time and improving their fitness and skill level on the day. A special thanks to O’Donovan Rossa GAA Club for providing their pitches.

This Saturday the monster blitz is U10 football with venues in Bandon, Dunmanway and Castletownbere.

The primary schools’ hurling skills test competition was held in Dunmanway with Newcestown NS winning. They progressed to represent this region in the county finals and finished second in that, which was a great achievement.

There will be a workshop for all club Cul Camp co-ordinators in Dunmanway on June 12th at 8pm. It is advised that all clubs be represented at this workshop, which will cover all aspects of Cul Camps.

The U13 football and hurling squads will be up and running in the months of June and July with two teams being picked for a blitz in Cork in football on August 11th with the hurling on August 5th.

There will be a open call to all players on the age to attend trials and coaching with players and clubs contacted with dates/times and venues.

If you want any further information on any coaching matters you can contact James McCarthy, GDA, on 087-7799531 or email [email protected]