Prize winners: Paudie Butler presents the competition winners with their jerseys at the launch of Cill Mochomóg. 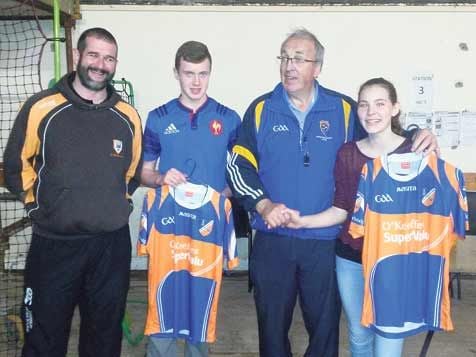 Prize winners: Paudie Butler presents the competition winners with their jerseys at the launch of Cill Mochomóg.

The evening began with a coaching session with Butler for St Colum’s underage camogie players, followed by an hour of training for the underage Cill Mochomóg group.

This was attended by almost 30 players who were treated to Paudie’s enthusiastic approach to the game. At the same time a similar number of U12s from Bantry Blues and St Colum’s were coached by David O’Mahony at the other end of the pitch so the scene was one of hurling activity all over.

The St Colum’s junior team then had a session with the busy Paudie Butler before everyone retired to the hall for refreshments and the official launch of the club by the main guest.

The club name and jersey came from a competition from the local schools and the prize of a club jersey for each of the winners was presented by Paudie Butler.

James Crowley from Bantry was the one who came up with the name while the club jersey was designed by Yvonne Doyle from the St Colum’s club.

In launching the Butler, Paudie spoke with passion about how GAA club amalgamations can bring hurling to players who otherwise would be denied the opportunity. He cited the example of Mount Leinster Rangers of Carlow, an amalgamation of four junior clubs only formed in 1987 going on to contest an All-Ireland club final in Croke Park.

His audience were enthralled by the fervour with which he talked about the importance of hurling, the GAA club, community, sense of place and the mental and physical wellbeing of our youth.

The launch was attended by officers of both Bantry Blues and St Colum’s and was an enjoyable occasion for all.

Special thanks must go to the local ladies for looking after the gathering with tea, sandwiches and goodies. The club is grateful to its joint sponsors, O’Keeffe Supervalu and Desmond Conservatories for their continued support.

• The club name (Cill Mochomóg) comes from the ancient parish name which dates back to the 12th century. Up to Penal Times the old parish extended from beyond the Cousane Gap going east and almost as far what is now known as Buckley’s Shop to the south, so the name practically takes in the entire player catchment area.