MARTIN Coppinger’s deftly-pitched last shot from the back of ‘Crowley’s bóithrin’ got the touch it deserved and beat the finish mark to give his partnership with Claire O’Sullivan a last-shot victory over Killian Kingston and Silke Tulk as The Marsh Road bowling festival concluded.

Although he fired the winning shot, the powerful Bantry man will be the first to admit that it was his Kealkill team-mate, Claire, who was the star of this Dowtcha Boy – sponsored by West Cork Distillers – feature doubles. Time and again O’Sullivan threw shots of prodigious length to hold on to or consolidate their hard-won early lead.

Leamlara’s Kingston partnered with Holland’s leading lady Silke Tulk, and they were in early trouble thanks to Coppinger’s monstrous third that yielded a big bowl lead. But Kingston and Tulk never gave up the ghost and were right in the mix had the Bantry man not beaten the line with their 19th shot of the score.

It was not going well in the opening phase for the Kingston/Tulk combination as another rocket from Coppinger to the ‘council gates’ threatened to double the western pair’s lead. 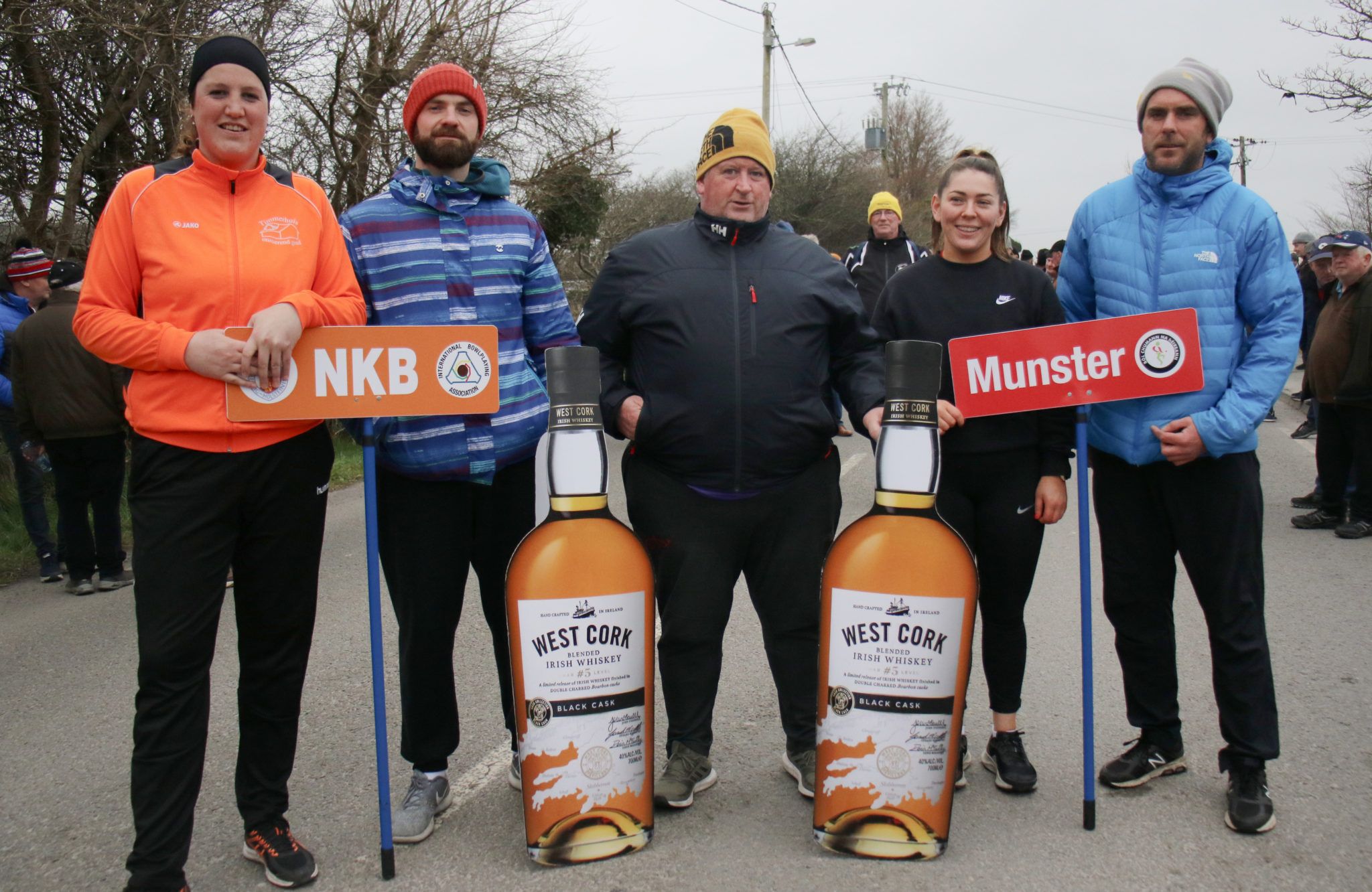 The Dutch woman showed her prowess with a splendid eighth at ‘Curragh hill’ to knock the bowl of odds. From there it was a battle of attrition. The leading pair saw their advantage reduced as Coppinger’s influence waned. It was O’Sullivan, with an inch-perfect cast around the ‘step’s and again at ‘Thornhill cross’, who produced the big shots to keep them in front.

Kingston’s 15th missed sight at ‘Ballyhilty’ and it was almost a bowl again after O’Sullivan hit a big effort past the novice line. Coppinger was lucky at the ‘avenue gate’ and Kingston hit a super shot to the last bend putting pressure once more on the leading duo. The Bantry man’s final cast deprived Tulk of a late chance to snatch victory. They played for a €25,200 total.

Gary Daly’s tour-de-force in the Sunday opening score was as good as has been seen on the Marsh Road in a while and definitely the pick of the weekend’s performances. Aidan Murphy did little wrong, but Daly’s 16 shots past the junior line yielded a bowl of odds victory for the Fermoy man.

There was punting of Cheltenham proportions as the stake balanced out at a whopping €70,500 total, and Daly certainly blazed a trail with three astonishing opening shots setting a marker for the day. Murphy did exceptionally well to hold off the bowl of odds with four good efforts, but the shot of odds came between them when the Mid Cork man's sixth throw unluckily crossed right.

Daly was relentless and had a chance of ‘the steps’ in eight but a miss here kept it at a bowl of odds in nine and ten. Both hit big shots to ‘Ballyhilty’ as Daly held his lead and, crucially, beat another fine cast from Murphy to the ‘avenue gate’. There was no catching the Fermoy man as he held his bowl of odds scoring the line three more.

In complete contrast, the second of the Sunday’s contests did not carry a stake but it mattered not a whit as a wonderfully entertaining battle unfolded between Bantry’s Donal O’Riordan and Holland’s Jos Bert Aalbers. Jos Bert last played on The Marsh Road in 2015 when he was not overawed by some of our best seniors, coming second to Gary Daly in a mini-international event and he showed why in a terrific tussle with his Bantry rival.

O’Riordan has rarely played better, firing six of the best from the start line at Ballyhilty to the rise on ‘Curragh Hill. Aalbers was 50 metres behind at this juncture but, to the astonishment of the large gathering, powered in front with a brilliant sequence to the ‘mart entrance’. O’Riordan dug himself out spectacularly with a ferocious last shot that Aalbers missed by a mere ten metres.

Dowtcha Boy’s opening score, shooting off just before 11am on the Saturday morning, contained enough drama in its closing sequence to cater for an entire weekend. That a magnificent shot-for-shot duel between Armagh’s Paul O’Reilly and Cork’s John O’Rourke from Rylane should be decided by such an uncharacteristic sequence of errors as they closed on the finish line seemed incredible.

In the context of what had gone before it was an extraordinary climax. O'Reilly, throwing for victory, completely misjudged, leaving O’Rourke with the chance of glory. Having proved his mettle in beating Ulster’s best at All-Ireland finals in northern territory it looked a formality but O’Rourke too miscalculated and it went to another shot. O’Reilly’s last was good from his stand but within O’Rourke’s compass. If it’s not your day, it's not your day and the Rylane man’s well-played response cracked right off the white line, handing Paul O’Reilly the most unlikely of victories.

Back down there was another tumultuous turnaround as Tim Young came from seemingly certain defeat to deny Sean Donnelly an Ulster two-in-row. A hefty €23,000 was the wager at issue as Donnelly overcame early Young dominance to fire a rocket-like sixth and take a lead of 60 metres. It got better for the 2020 junior A All-Ireland champion as a sweeping seventh put him a bowl ahead. A super effort from Donnelly that Young, crucially, did well to follow, kept it to a bowl in favour of the Ulster man, as they played past the ‘council gate’s’. Young kept the pressure up with a brilliant effort from here and his reward came with a bad misplay from Donnelly suddenly brought the lead back to manageable proportions. 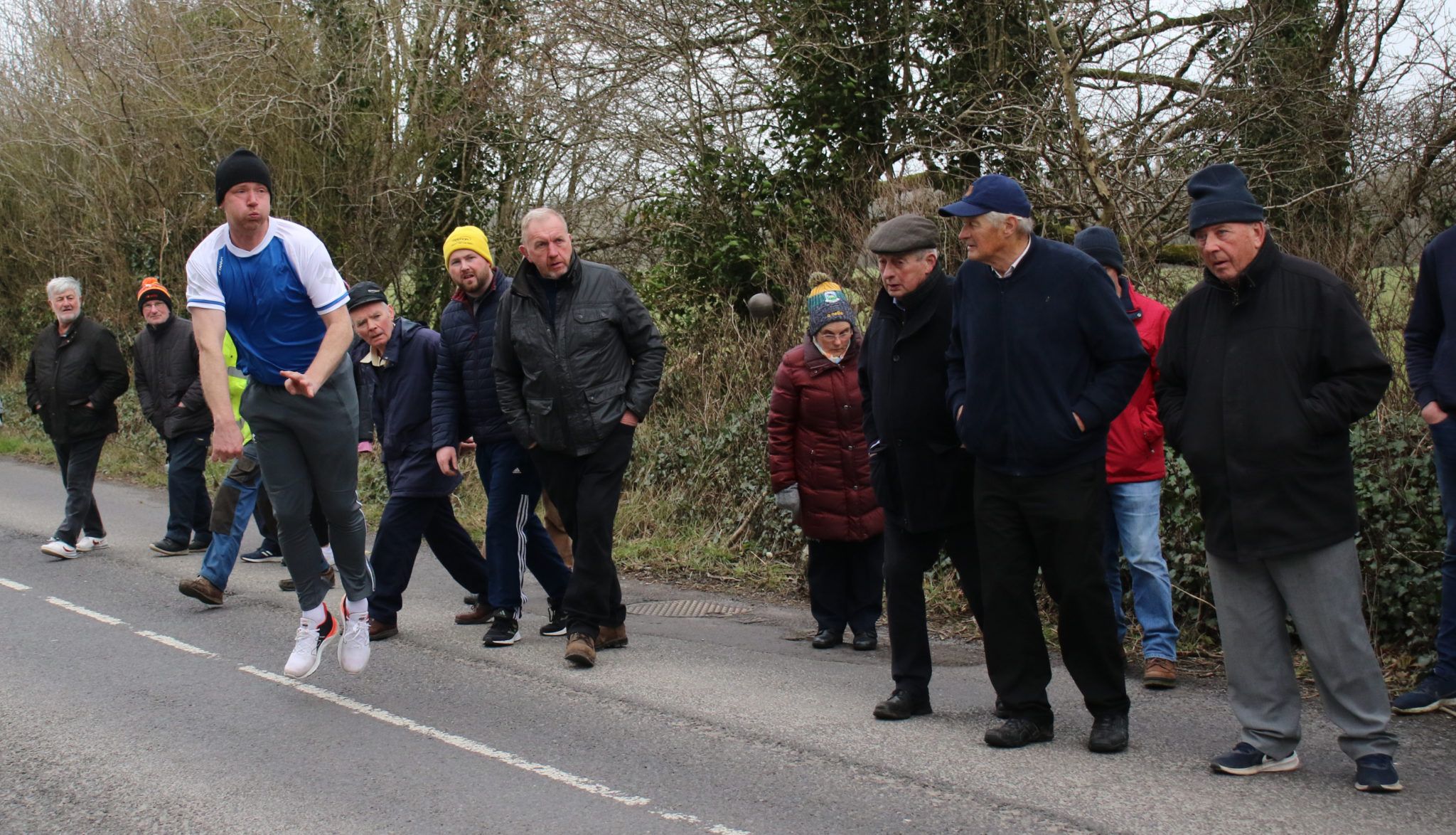 The recently crowned West Cork junior A champion from Bantry was sensing that this was his day. He regained the lead with two well-taken deliveries to CH Marine. He then duly beat Donnelly’s fine last attempt for a much-savoured victory.

In the third of the Saturday’s north-south encounters, Fermoy’s Patrick Flood showed why he is a leading intermediate contender in the 2022 championship. Promoted on ability, he exhibited shots of the highest order, if not absolute consistency, in a one-bowl win over Tyrone’s Eugene McVeigh for a €20,600 total.

‘Dowtcha Boy’, on its second hosting, was proclaimed a resounding success from a bowling perspective by organisers and sponsors and local Co-Action were big beneficiaries too from an on-road raffle and stake proceeds.