LYRE Rovers needed penalties to see off Drinagh Rangers in the opening round of the West Cork League's Gareth O’Driscoll Premier Cup at Knockskeagh last Tuesday.

A free-flowing encounter produced four goals, plenty of talking points, some overzealous tackling and a penalty shootout in which Lyre’s Barry O’Mahony saved a crucial spot-kick.

Lyre should have opened the scoring inside the second minute but Jack Cowhig was denied by a superb Rob Oldham stop. A brisk opening saw plenty of attractive football yet neither side able to carve out a clear-cut chance. Robbie McQueen and Tomás Connolly prompted a succession of Drinagh attacks whilst Lyre’s Adam Hunt and James Lynam proved just as busy.

A goal was all a full-blooded cup tie was missing until Gearóid Barry intervened on the quarter-hour mark. The Lyre midfielder found the bottom corner with a deflected shot from the edge of the penalty area. That strike preceded an entertaining spell in which both sides used the full width of the pitch to stretch their opposing defences. 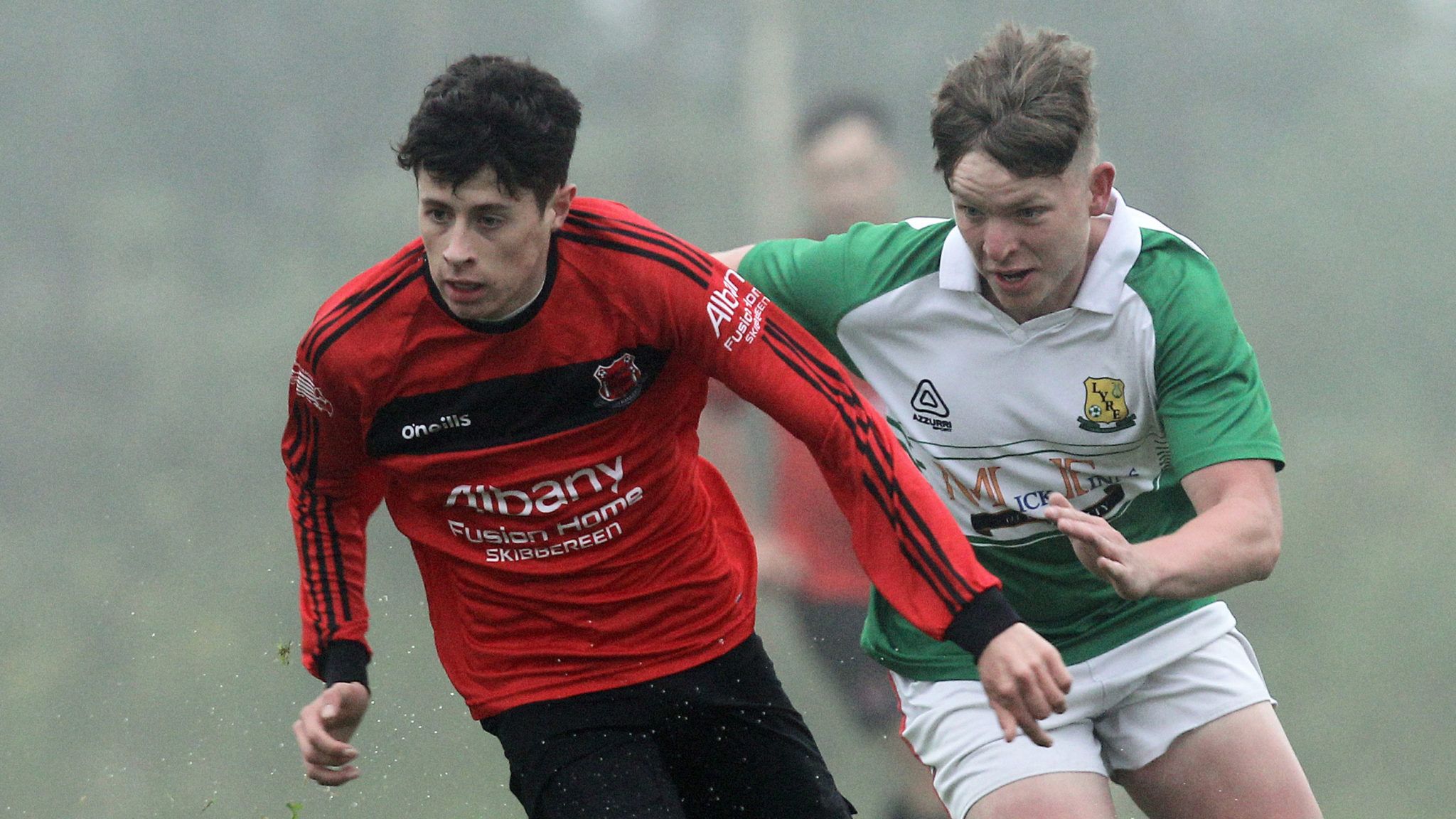 Keith Jagoe and Barry O’Driscoll (H) looked menacing whenever in possession but made little headway against a well-organised Rovers back four. Kevin Cormican and Shane Collins proved a solid central-defensive pairing even though Lyre required goalkeeper Shane Enright’s intervention to prevent an equaliser after 34 minutes.

Drinagh’s pressure intensified as Jagoe saw a goal-bound header cleared off the line but a leveller continued to elude the Canon Crowley Park outift. The home team ended the half with Adam Hunt curling a free-kick over the crossbar.

Another Hunt break forced the visitors into a last-ditch clearance prior to Cathal O’Mahony firing over at the start of a high-tempo second period. An entertaining tie produced its second goal when Lyre failed to clear a Robbie McQueen corner and Keith Jagoe pounced six minutes after the break.

The visitors’ Barry O’Driscoll (H) had a goal ruled out for offside shortly after, one of many hotly-debated decisions on the night.

Rovers continued to defend manfully but were powerless to stop Rangers from taking the lead after Robbie McQueen’s deflected effort arrowed into the roof of the net on 67 minutes. That goal was no more than the visitors deserved following a much-improved second-half showing.

Drinagh had another goal ruled out for offside after Jagoe tapped in but that was Lyre’s cue to force their way back into the tie. A series of free-kicks and corners had Rangers’ defence under pressure and the visitors were relieved to see a Barry O’Mahony volley deflected over with 12 minutes to go.

Drinagh looked set for victory at that point until Lyre produced a moment of magic five minutes from the end. Adam Hunt was Rovers’ standout player and executed a marvellous volley to send the tie to extra-time.

The floodlights were turned on and the rain began to fall at the beginning of two periods of additional time. Unsurprisingly, tiredness set in and neither team produced a chance of note until the second half of extra-time.

A rare Drinagh defensive lapse permitted Adam Hunt a sight of goal but Rob Oldham was equal to the effort. There was no separating the duo so we went to a penalty shootout. Barry O’Mahony (Lyre) and Sean Calnan (Drinagh) donned the goalkeeper’s gloves for the ensuing spot-kicks. O’Mahony saved Drinagh’s first attempt and Lyre went through 5-4 at the conclusion of an action-packed evening.