Kerry are Munster champions for a seventh time in a row in what was a cracking Munster final. In the end Kerry's forwards were far more clinical with David Clifford and Sean O'Shea proving to hot to handle.

Ronan McCarthy's charges will be hugely disappointed but they should hold their heads high as they look toward the qualifiers. With five minutes to go they were still very much in the game.

What will perhaps jar the most though was Cork's inability to take advantage of the extra man when Paul Geaney was given his marching orders on 52 minutes. 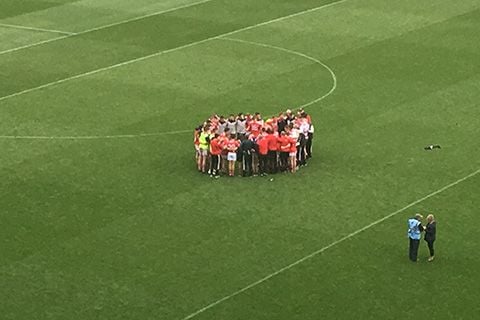 The Cork team huddling after losing the Munster final

An opportunity to defeat #Kerry missed.

Progress since last year for the #corkgaa footballers and Ronan McCarthy.

Back to back Kerry points give the Kingdom a more comfortable lead. Three point game now - deep into injury time.

A fabulous interception by Liam O'Donovan inside his own 45 eventually leads to Cork winning a free which Mark Collins converts. One point game. Five added minutes to play

Well worked Cork move is finished by Mark Collins. He immediately follows up to make it a two point game with three minutes remaining.

Ten minutes left on the clock here in the Munster final. Kerry lead 1-16 to 3-07. Cork not making the extra man count thus far. Floodlights have been switched on. Atmosphere is bubbling. Both sets of fans really enjoying what has been a great second half.

Two unanswered points from Kerry to put them two up before Paul Geaney sees red for a late hit on Kevin Flahive. 15 minutes left to play.

GOAL FOR CORK!!! Brian Hurley fists one in after a long searching ball from deep - he deserved that one. Cork supporters are going wild. Chants of 'Rebels, Rebels, Rebels' ring out in the Páirc. Game is level. Kerry 1-12 Cork 3-6.

Brain Hurley with a goal for @OfficialCorkGAA and it's game on here! pic.twitter.com/16h20d1AFo

Cracking score by Sean White after good steady Cork build up to make it Kerry 1-12, Cork 2-06.

Cork tails are up - Mark Collins slots a lovely score over and fists pumps to the raucous home support. Three point game now. Five minutes gone in the second half.

Luke Connolly converts from the spot for his second goal of the game and a second for @OfficialCorkGAA pic.twitter.com/5YD83wd6r1

HT here at Páirc Uí Chaoimh and Cork are still within touching distance of the Kingdom - wides will have to be kept to a minimum in the second half if they are to stand any chance of winning this game. Kerry's runners from deep causing real problems for the Cork defence. Cork have had their chances but they haven't been clinical enough in front of goal.

A fine save by Mark White prevents Gavin White scoring another goal for Kerry - the way the Cork defence parted like the Red Sea was very worrying though. Second time it's happened. They won't get away with it again.

Cork being made to work hard for there scores but they're more than holding their own out there. Mark Collins taps over another free before David Clifford makes it 1-8 to 1-3.

GOAL FOR CORK! Luke Connolly palms one in following good work from Ruairi Deane. 1-5 to 1-1.

LUKE CONNOLLY WITH A GOAL FOR CORK!

15 minutes on the clock and Cork are failing to make their chances count - Ruairi Deane's goal chance from inside the 14 is well saved by Shane Ryan - Kerry lead 1-5 to 1 point.

David Clifford and Sean O'Shea causing plenty of problems for the Cork defence.

Mark Collins points from a free to get Cork up and running on the score board. Dara Moynihan gets another for Kerry almost immediately after.

Goal for Kerry - Sean O'Shea drives through the heart of the Cork defence before handing it off to an overlapping Tom O'Sullivan who slots it home with ease. 1-3 to 0-0

Kerry open the scoring - Sean O'Shea points from a free 14 yards out. The rebels perhaps fortunate not to have conceded a penalty.

Less than three minutes to throw in - parade is underway

Parade underway at Páirc Uí Chaoimh - plenty of spare seats in here but the atmosphere is building nicely pic.twitter.com/ZnIpkKWfGj

The Cork team are out warming up - 30 minutes to throw-in pic.twitter.com/y9J64cADue

It's prediction time at Páirc Uí Chaoimh with just over 30 minutes to go throw-in. Here's the thoughts of our sports editor Kieran McCarthy:

'Kerry by eight I think. Hopefully we'll see a good performance from Cork so that they have something to build on as we move toward the qualifiers'.

With over an hour to go until throw-in in the senior game why not take the time to read this cracking interview by Denis Hurley with Castlehaven's Brian Hurley.

Kerry are Munster minor champions following a thrilling victory over Cork - the game finished 3-14 to 2-14. Bobbie O'Dwyer's men can hold their heads up high despite the result. 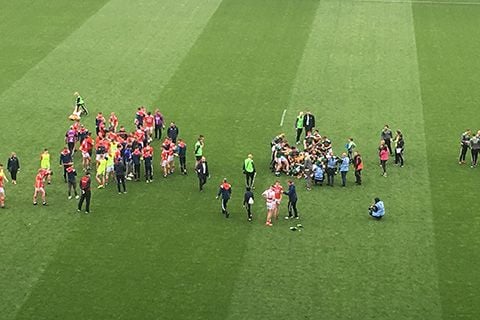 We're into injury time and Kerry look like they have this sewn up - three points clear. Cork players struggling to keep up with the pace

Kerry lead by a point with under a minute to go

Four minutes to go and another cracking score from Michael O'Neill moves the Rebels to within a point. We're set up nicely for a grandstand finish

The Cork tails are up - fantastic score from Michael O'Neill gets a huge cheer from the Rebel supporters. Kerry lead 3-11 to 2-12

Another Kerry goal, this time scored by Kevin Goulding making it Kerry 3-8 to Cork's 2-8.

Cork strike first in the second half to move to within a point of Kerry. Captain Conor Corbett the scorer.

It's half-time in the curtain raiser here at Páirc Uí Chaoimh with the Kingdom leading by two points.

We want to hear your thoughts and predictions for the senior game that throws in at 7pm. Get in touch in the comments section on this Facebook post. 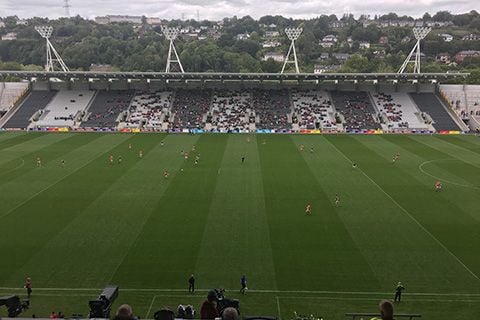 'When Mark Collins was only four years old, he was already front page news.

On the September 24th, 1994 edition of The Southern Star, baby-faced Mark posed in Castlehaven colours, the socks pulled up to his knees, on page one. He was the club mascot for that year’s Cork SFC final against O’Donovan Rossa. Standing beside him was six-year-old Colm O’Driscoll, the Skibb club’s mascot and a future inter-county team-mate.'

The Kerry team to face Cork in this evening's Munster final

Welcome to our Munster final live blog where we will be posting news and updates throughout the day ahead of throw in.

Already Ronan McCarthy has been forced to make three changes to his starting 15 with injuries forcing out centre back Thomas Clancy and both Eoghan McSweeney and John O’Rourke in attack, while in come Sean White in defence and Kevin O’Driscoll and Stephen Sherlock in the forwards.

While you're here why not check out this interview with Cork talisman Ruairi Deane or listen to our pre-matcch podcast featuring Castlehaven's Brian Hurley.