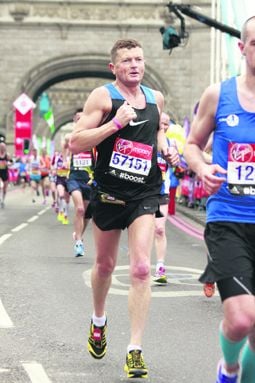 On the run: Kilmichael athlete Liam Cotter pictured running in the London Marathon earlier this year.

HE’S one man who is counting down the days to his 50th birthday.

On July 16th, next Thursday, Liam Cotter reaches the landmark date, but rather than flinch at waving goodbye to his forties, this Kilmichael marathon runner is embracing it, and the doors that it will open.

Bring it on, he smiles.

‘I’m looking forward to it. In the over-45 range I’d be in and around the top 20, but when I’m in the over-50 I will be targeting top-three finishes,’ Cotter explained.

That’s not this late starter’s only target – within the next nine months he hopes to complete his mission of competing in the top six marathons in the world.

Already, the Mid Cork runner has conquered New York, Boston, Berlin and London, and in that order, and next up on his to-run list is Chicago this October followed by Tokyo in February next year.

It’s an impressive marathon CV by any standard, but even more so when you consider that Cotter only ran his first marathon in 2008. He was late to the party but has been making up for lost time ever since.

An accountant with Kerry Group in Charleville, who lives in Bishopstown, he can clearly remember the trigger moment, back in 2007, that sounded the starter pistol for his current adventure.

The Cork Marathon was in progress, Cotter was driving along in his car with his wife Fabiola. He takes up the story.

‘I stopped the car in Ballincollig, stood at the side of the road for two hours and I watched thousands of runners going past. I turned to my wife and said, “I’ll be there next year”. She looked at me and laughed, because the most I could run at that point was no more than two or three miles,’ Cotter explained.

‘My first marathon was the year after, which I ran in 3:07. I had no strategy except to run as fast as I could for as long as I could. At half way I was 13th but then I hit a wall and completely bombed in the second half.

‘My first three marathons would have been like that because I had zero strategy. It took time to realise that you need some thought and strategy.’

Cotter listened and learned, and steadily his times improved. His love for running grew, and he got faster and faster. He has now completed 11 marathons, nine of which have been under the three-hour mark.

Considering that he competed in the over-45 category in those marathons and will now be running in the over-50 group, Cotter has his sights set on bringing home the gold next time out, all going well.

‘I would be the first to admit that I don’t have a lot of raw athletic talent but with hard work and smart conditioning I honestly believe anything is possible,’ said Cotter, who added, ‘that is why I truly believe I can win my age category in the Chicago marathon.

‘Two hours 42 minutes won it last year and I know if things go well on the day, this is well within my radar.’

This former Kilmichael footballer, who had two Mid Cork titles to his name before he moved abroad in his 20s, runs between 90 and 100 miles per week.

‘You can’t be lucky in marathons, you get out what you put in,’ he said.

And Cotter puts in a lot, having just qualified as a neuromuscular therapist while he also places a lot of trust in his strength and conditioning, helped by John Dillon from Freestyle Gym in Douglas.

While other people might prefer to watch TV, Cotter prefers to run, every day; morning and night, if he can.

He’s now on a mission, to complete the big six, and when he’s finished that, he suggests that he might run them all again with the target of beating all his previous times!

‘I don’t do marathons just to run them, I run them to achieve something. That’s what makes it exciting for me. I still feel I have a long way to go to reach my optimum level,’ he confidently adds, as he gets ready to celebrate his birthday in style – roll on Chicago.