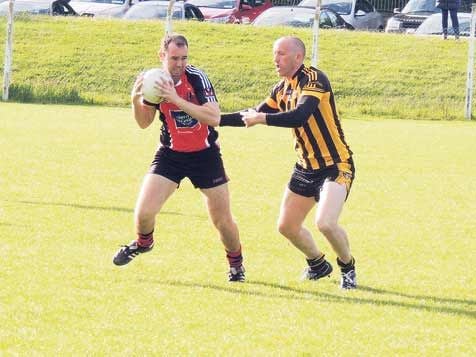 THERE’S a Kerry man involved in Kilbrittain underage GAA – we’ll protect his identity – who Clare native Noel Griffin regularly chats to about the highs and lows of Cork football.

Two men from outside the pale, both adopted sons of Kilbrittain GAA and both working with the club’s underage set-up, who like to discuss the Rebels’ ups and downs – a pastime that’s kept them fairly busy over the last few years.

How that conversation will play out next week, and whether Griffin is wearing a smile or a frown, will hinge on the happenings in Páirc Uí Rinn this Sunday.

Former Clare footballer Griffin will be there in his Banner jersey, his two young boys, Adam and Luke, will be in Rebel red, with father and sons divided on the outcome of this Munster SFC semi-final.

Griffin is apprehensive. He’s confident, but cautious, and the head and heart aren’t too far apart ahead of a clash where Cork are expected to win.

Therein lies a key component, the difference between the top teams and the chasing pack, according to Griffin, who lined out with the Clare senior footballers in 2003 and ’04, and who played championship against Cork in the latter season.

‘Colm Collins has come in (as Clare manager) and he has brought in a very professional approach. Ephie Fitzgerald is involved now, and Paudie Kissane was last year, so they are pushing out all the stops to get the guys prepared.

‘You can’t underestimate how important the (quarter-final) win against Limerick was for Clare and what it will do to the team. There is a big performance in this Clare team. They have pushed a lot of the bigger teams very close, but who knows whether that performance will come on Sunday.

‘People will think that Cork will win by six or seven but I don’t see that happening – this will be a tight game. There is a belief there that Clare can go after Cork, especially after some of the beatings that Cork have suffered over the past few years.

‘If confidence is any bit low in the Cork team and if Clare go for it and if they believe they can do it, they’ll go very close.

‘If Clare play for 70 minutes they can do it. The belief they bring will be the key.’

Griffin knows all about running Cork close in the championship. Go back 11 years to an All-Ireland SFC round two qualifier in Ennis when Clare, after beating Sligo well in the previous round, pushed Billy Morgan’s Cork to the brink.

‘It was close, we had our chances but Cork pulled away towards the end of it,’ Griffin laments all these years later.

‘We had beaten Sligo well in the round before that so there was a bit of confidence going into the Cork game.

‘We started well and it was there for the taking even near the end. I remember Kevin O’Dwyer pulling off two great saves (from Rory Donnelly and David Russell). It was one of those games where a big result was within touching distance but we didn’t get it over the line.’

A certain Kilbrittain man, Owen Sexton, scored a point from wing back that day in 2004, but current Cork selector Sexton ‘is not giving the game away this week,’ Griffin jokes.

A year before the game the Clare export married a local Kilbrittain woman, Valerie, but Griffin was still playing his club football with Kilrush in West Clare.

He came close to a county title in 2003 but they lost the final replay to neighbours Kilkee. He still remembers Denis Russell’s 60-yard free, against the breeze, sailing over the bar to level the drawn final.

‘I had three brothers playing that day so it would have been nice to win. We’d won the county league the season before and we had Donie Buckley training us those two years. We’d a good set-up and a strong team but we couldn’t finish it off,’ Griffin explained.

He had been travelling up and down, from West Cork to Clare, since 2001, and something had to give.

In 2006 he joined Clonakilty where he spent five seasons fighting it out with Nemo Rangers.

‘Clon had one of the strongest teams in Cork at the time but Nemo were outstanding during the same period – that wasn’t good news for us.’

But good things do happen to good people, and in 2009 Griffin and Clon won the county title. Silverware, at last.

After the following season, it was decision time, again. Senior football is akin to a full-time job, and he has one of those, plus he has four young kids – Luke and Adam, Sheana and Jocelyn – as well as an understanding wife to think of.

‘I couldn’t justify the commitment needed at 33,’ he said, ‘so I got involved with Kilbrittain GAA Club, and it was all in from the very start – playing and training.’

He’s been a leader for the Black and Amber ever since, and even though he will be turning 38 in August he’s still producing the goods on the football field – he scored 1-6 in last Saturday’s county junior B football championship win (3-10 to 1-2) against Shanballymore in Ballygarvan.

‘I have been playing football all my life at a high standard so I’m comfortable at junior B level. They’ve stuck me in at full forward anyway so I must be doing something right, but I’m not enough use that they’ll put me out the field,’ he laughed.

Good habits (learned in Clonakilty, he says) die hard. He takes care of himself, eats properly, trains hard, and he still enjoys it.

What he would enjoy even more is if Clare can reduce Cork to their knees in Sunday’s Munster semi-final. It’s not as mad a scenario as it seems, he says, but he fears a day like July ’04 – close, but not close enough.

‘I am hoping Clare play for 70 minutes but they are up against a team with the pedigree to be in the top three teams in the country.

‘If there is going to be a shock it will be in Páirc Uí Rinn. My heart says Clare but, like 10 years ago, it could be a narrow win for Cork,’ he said, with a shake of the head, not wanting it to be true.

‘There’s a big performance in Cork and they need one. They’ll be stinging from the Dublin game. Brian Cuthbert is a year longer in there so they’ll be more comfortable with the set-up.

‘The potential is there, that’s the most frustrating thing with Cork from a supporters’ point of view, but they haven’t been consistent.’

Griffin’s hoping for one of Cork’s inconsistent days on Sunday, and if that is the case then himself and ‘the Kerry man’ will have plenty to discuss and pour over at underage training in Kilbrittain next week.

And if you’re wondering which one is Noel Griffin, he’ll be the Clare man with a smile so bright that it would be seen back home in Kilrush.