Clonakilty Sports Complex was a hive of activity last Wednesday evening week as West Cork’s U12, U13 and U14 (Kennedy Cup) squads were permitted to return to full non-contact training sessions. Smiling faces, laughter and plenty of banter was the order of the day as each squad were put through their paces.

The WCSSL Emerging Talent Programme’s (ETP) FAI-qualified coaches were as relieved as their players to make a return.

‘It was important to get our Kennedy Cup squad back out training last week,’ WCSSL Kennedy Cup coach Áine O’Donovan said.

‘Obviously, the players getting the opportunity to meet up with each other once again and training together on a pitch was fantastic to see. Even though it was non-contact training, the players were still challenging themselves and working on rediscovering their touch, while at the same time, having as much fun as possible. That’s why the ETP is so important because the lads get to test themselves every week against the best players in their age-group from across West Cork.

‘It was an important night for the Kennedy Cup coaches too. It has been a long couple of months hosting Zoom calls and online meetings without actually seeing the players out on a pitch. There was a brilliant atmosphere because everyone had been looking forward to meeting up after such a long break since last December.’

Unfortunately, it is still too early to tell if the SFAI will be able to host their annual 32-team Kennedy Cup tournament at their usual venue in the University of Limerick later this summer. Covid-19 forced the cancellation of the 2020 edition but Áine O’Donovan and her fellow West Cork coaches will continue their preparations until told otherwise.

‘Hopefully, the boys will get the opportunity to play in a Kennedy Cup having put so much time and effort into preparing this past year,’ she said.

‘There are rumours of a possible date of the last two weeks in July for the Kennedy Cup but things are changing on a daily basis because of Covid-19 so we have to be mindful of that. All West Cork can do is continue with our preparations. Hopefully, the lads will get to experience a Kennedy Cup in some format because they have dedicated themselves, especially during lockdown, so well. They deserve the chance to pull on a West Cork jersey and play at such a prestigious tournament.’ 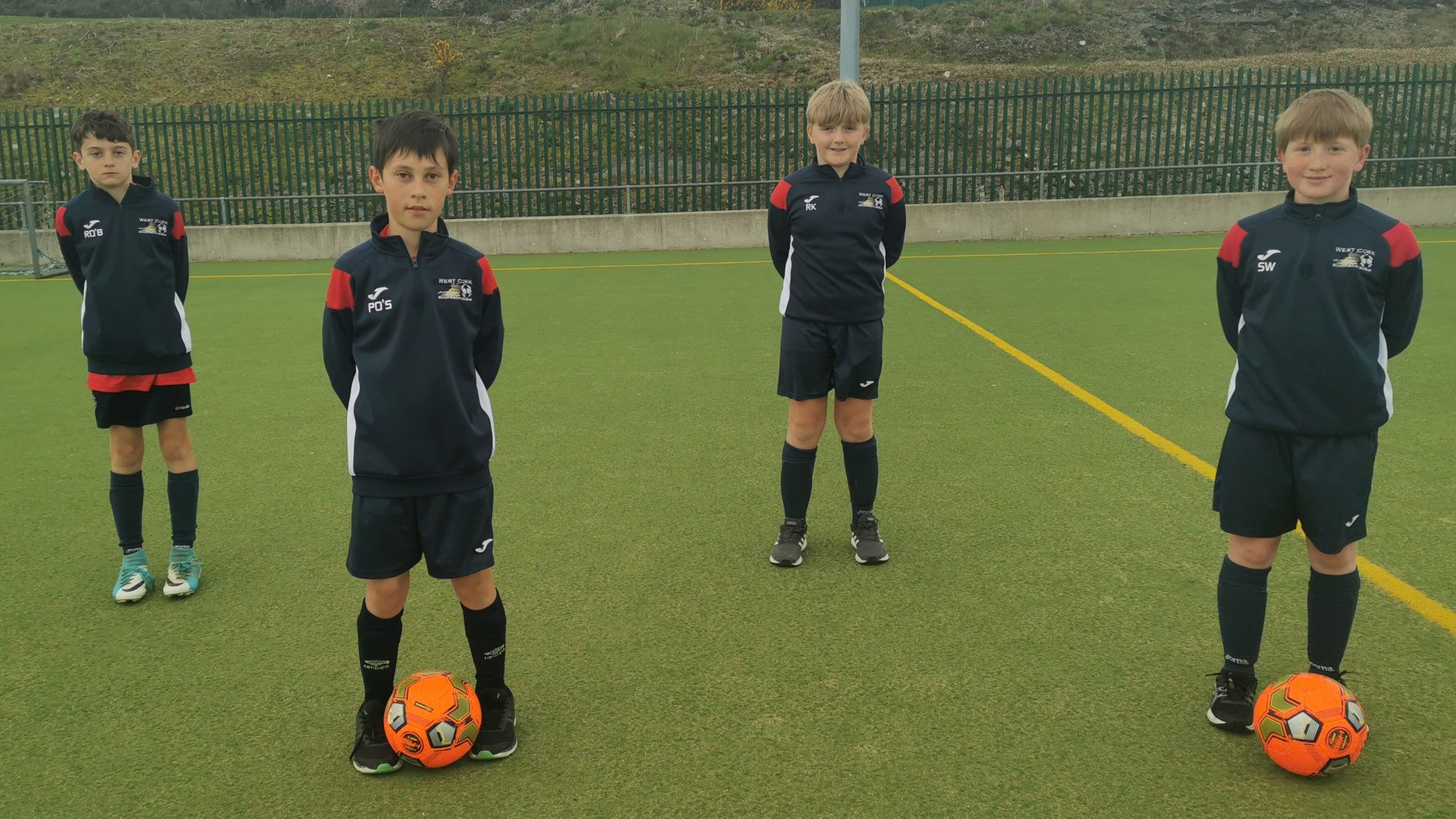 Head Co-ordinator of the WCSSL ETP DJ Curtin and fellow FAI-qualified coaches Shane Hurley and Sean Spenser were first back on the Clonakilty Sports Complex last week. The West Cork U12 Inter-League squad got together on an astro-pitch for the first time since last year.

‘This is a day we have been waiting for a long while,’ DJ Curtin said.

‘To see all the happy and smiling faces of our U12 players arriving in for ETP training was lovely. There were as many happy parents as there were players I’d say, just to see their children back out on a pitch and playing football once again.

‘Look, training in the ETP at this time of the year cannot but benefit the children involved. The good news is that all football clubs were permitted to start their academy training last week so pitches are now full of young children playing football all over the country whether they are in ETP centres or not.

‘It will be a case of just easing players back into it over the next couple of weeks. We will be focussing more on the fun element of playing football rather than reintroducing the technical or tactical aspects that come with being part of our FAI Emerging Talent Programme squads.

‘From a physical point of view, our coaches will not be pushing the players too hard because they need time to readjust to the demands of training. It has been a long time for them to be away so we will be looking to gradually build up their fitness. Fun is what it will be all about over the next few weeks. We love having our players back and playing football but having fun and enjoying themselves is more important right now.’

‘You could see the smiles on faces and just general happiness all around the place last Wednesday evening,’ WCSSL U12 Inter-League coach Shane Hurley noted.

‘It was the same for the coaches! We missed the Emerging Talent Programme as much as the children and the parents too. The U12 age-group is crucial because you are trying to establish good habits both on and off the pitch. Good habits are something we have hammered home to the players over the last few years. Be it preparing their own gear or getting the right nutrition, it all plays a part in a player’s development.’

‘I couldn’t help but smile when I walked down the steps to the pitch and saw all U12s with a ball at their feet,’ U12 Inter-League coach Sean Spenser said.

‘It had been a long time since I had the pleasure of coaching the West Cork U12s or seeing them all so happy. I feel so lucky to have been allowed continue to train and (goalkeeping) coach with the Cork City Women’s FC team during lockdown. Having fun is the only thing that matters over the coming weeks with both the U12 and U14s. It has been so long since our players got to train together. That’s why it will be all fun over the next couple of training sessions.’