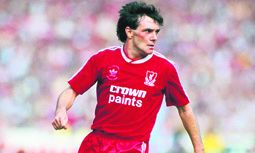 Legend: Ray Houghton will be lacing his boots in West Cork.

FIVE Liverpool FC legends will strut their stuff on West Cork soil this summer to prove that class really is permanent.

A must-see event for any Liverpool supporters in West Cork, and indeed football fans in general, a Liverpool Legends XI will take on Drinagh Rangers’ Legends at Canon Crowley Park, Drinagh, on Saturday, July 25th, at 3pm.

Four Republic of Ireland and Liverpool legends – Ronnie Whelan, Ray Houghton, John Aldridge and Phil Babb – have been confirmed to take part, while former Scotland midfielder Don Hutchinson will also be lacing his boots in West Cork that day.

2,800 tickets will go on sale for the biggest soccer match in West Cork this year, with Drinagh Rangers’ Don Hurley explaining how this exciting legends’ game came about.

‘He was very impressed with events on the day and the people he met in West Cork and suggested bringing a Liverpool Legends’ XI to West Cork in 2015.

‘David Hall, recognising the contribution Drinagh Rangers AFC has made to soccer in West Cork, then offered Drinagh the opportunity to host the Liverpool Legends.’

The chance to host former European Cup and English League winners is an opportunity Drinagh have grasped with both hands, and funds raised from the game will go towards ‘the continued development of the club which currently caters for four adult teams and numerous underage teams’.

The Friday before the game, a Liverpool Legends’ Golf Classic will be held in Skibbereen Golf Club, which is a chance for golf fans and Liverpool fans to play a round of golf with a Liverpool hero, such as John Aldridge.

Tickets for the match cost €20 for adults and €5 for U16s. The following is the list of local outlets in West Cork that are stocking the Liverpool Legends v Drinagh Legends tickets, which are on sale now.