Bandon teenager Fin Wilson gets airborne on on his 125cc KTM at the Vernon Mount track that is just off the Kinsale Roundabout in Cork city. (Photos: Martin Walsh)

SOARING high into the sky, Bandon’s Fin Wilson judges his landing to perfection. He has to. Otherwise, being thrown from his 125cc KTM motorbike is a real possibility.

Saturday last was his first day at his local track in Vernon Mount on the south side of Cork city as he familiarised himself with the motorcycle that he will use in this season’s motocross championships, here and in the UK. Last season, albeit curtailed, he used a 85cc KTM machine.

Switching to the 125cc, he adapted seamlessly. Once the helmet was on, Fin was very much in his zone. Totally focussed, nothing else mattered. Each practice session lasted about 20 minutes, after which he took a similar rest and an opportunity to replenish the sugar levels. Motocross is both physically demanding and mentally challenging, and it requires strength and endurance.

His friends describe his motocross adventures as ‘mad but awesome.’ Fin doesn’t try to explain the process and certainly doesn’t inform them of his success. He leaves his talking on the tracks. 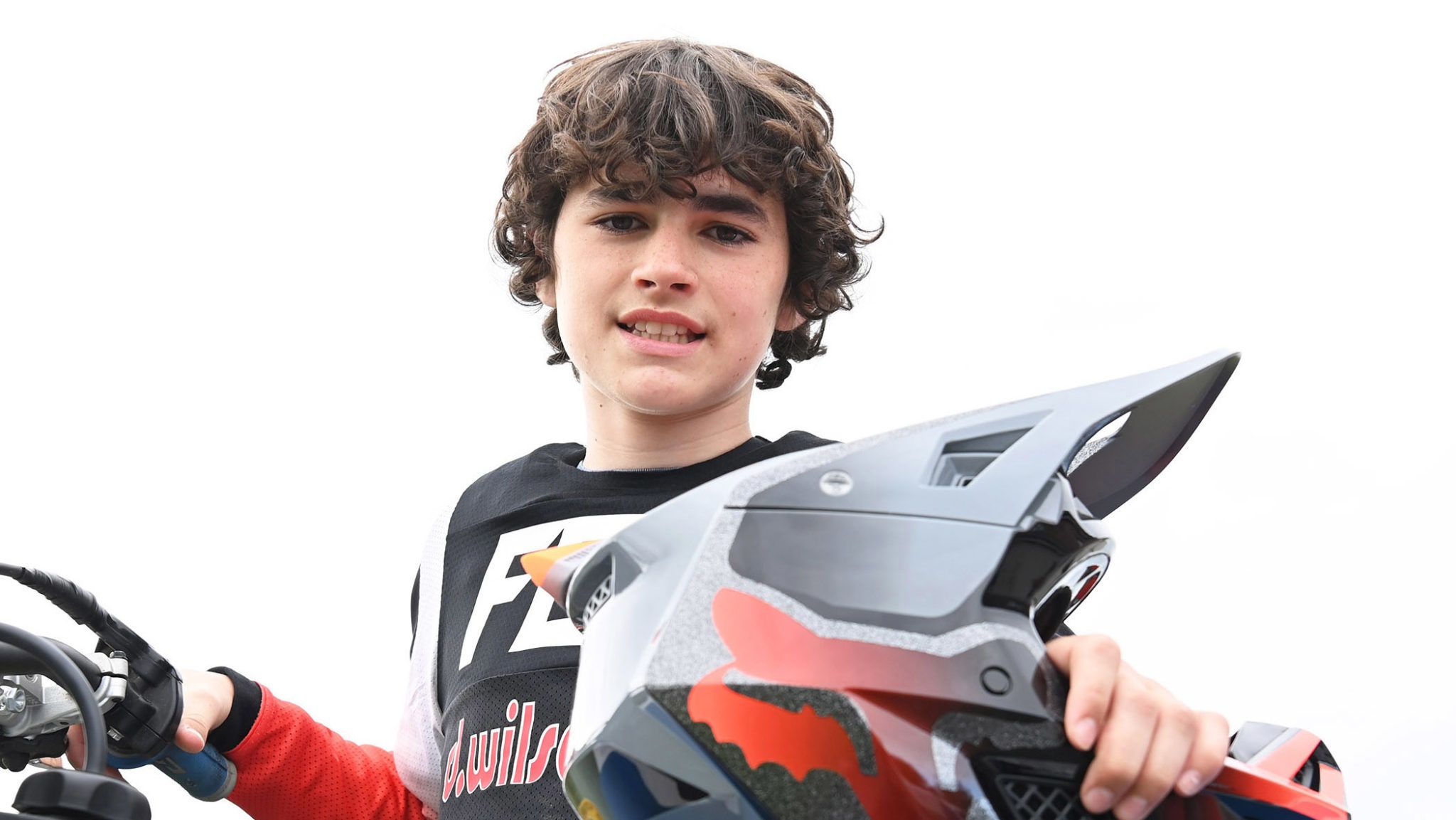 Fin Wilson is set for a busy season of racing.

He has won the Irish 65cc Cadet Championship twice (2015 and 2017), finished first in the 2017 Ulster series and fourth overall in the British Championship, was small wheel 85cc Irish champion twice (2018 and 2019) and came fourth in the British Youth Championship. The Covid pandemic prevented him racing the 85cc big wheel. He has worn the green of Ireland on three occasions, racing in Belgium in 2016 and 2017 on a 65cc KTM and in 2019 on a 85cc Husqvarna.

His passion for motocross began early, as his father Peter explained.

‘We used to go to Vernon Mount to watch events when he was about three or four and he became obsessed with it. I bought him a mini adventure when he was four and he tried riding it around the fields. At first he couldn’t really manage it, but then we got him a proper 50cc KTM and he’s never looked back,’ Peter said.

Fin’s first race in 2012 was only a few miles away at Brinny. Practice around the fields close to his home paid dividends. First time out, Fin was a winner, even though he still hadn’t reached his sixth birthday. That was a key moment when it arrived as he was then able to secure a proper licence and he competed in the Southern Motocross series, gaining experience of the tracks.

His first full season was in 2013 racing in the Irish Championship at tracks from nearby Brinny to Vernon Mount and Cloyne in his home county to tracks in Clonroche and Ferns in County Wexford, Dundalk, Gormanstown, as well as Desertmartin, Tandragee and Donemana in Northern Ireland.

By 2016, the travel agenda also included tracks at Culham near Oxford, Little Silver in Exeter, FatCat Motorpark in Doncaster, and tracks in Scotland, all of which became as familiar as Brinny and Vernon Mount as he took part in the British Youth Championships. After a few seasons on his 65cc KTM he progressed to 85ccHusqvarna in 2018.

Fin admits he is very competitive. It’s an inherent trait. He has no fear, not even when he is high above the ground.

But he likes to keep his exploits low key.

‘My school friends know what I am at. They think it’s mad but awesome.’

He also wants to crack motocross. Rather than unveil a strategy of how to get there, his response is brief.

Yet, he knows what lies ahead, just like the change to the 125cc KTM, as he explained: ‘It’s a lot faster, and harder to ride as it is more tiring.’ 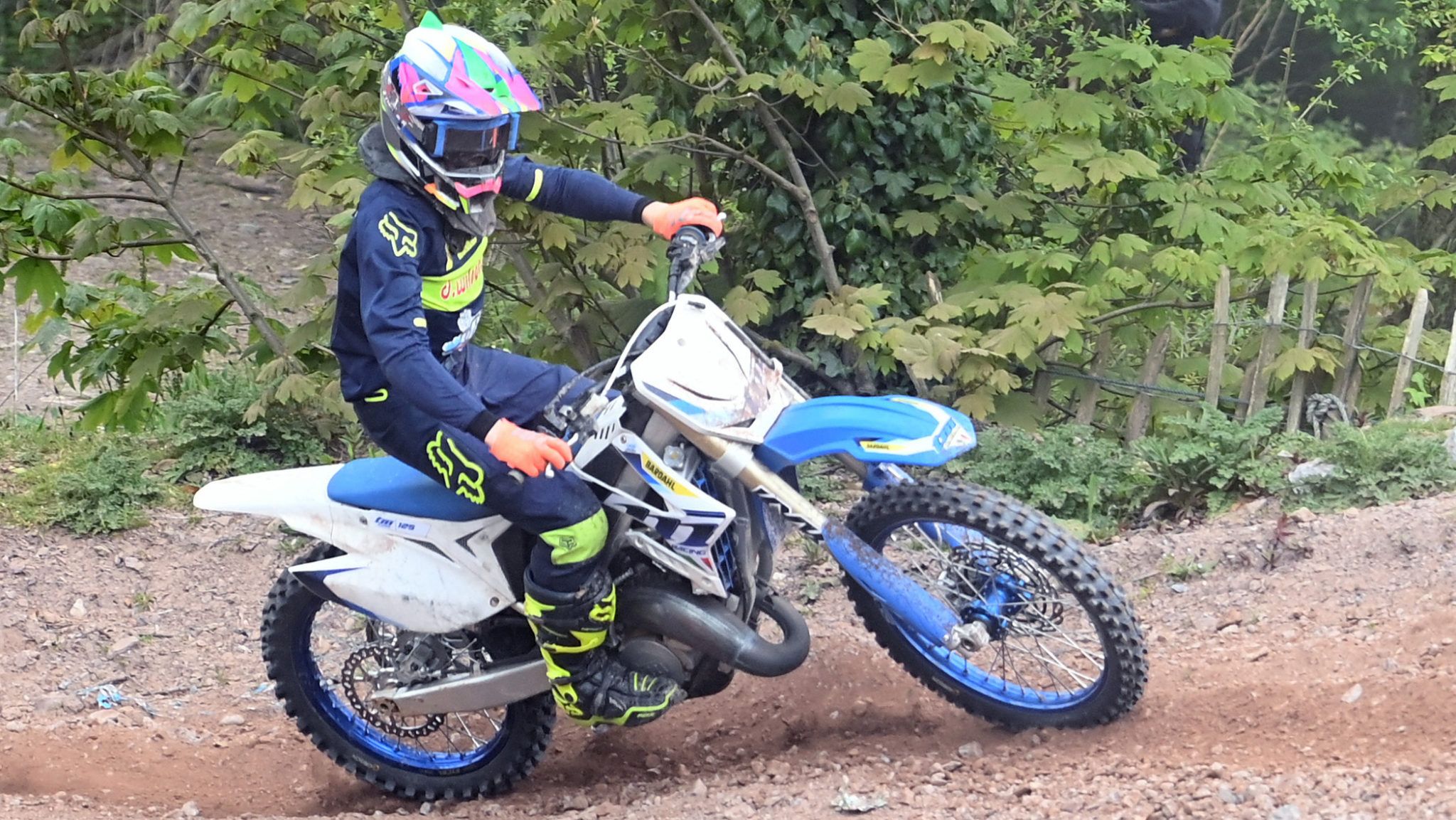 Fin Wilson on his 125cc KTM at the Vernon Mount track.

Prior to Covid, Fin had a personal trainer at Bandon Strength and Conditioning and worked to a programme. When the situation allows, he will return to the facility.

When he raced the 85cc, he was always in the top five at the UK races. Here at home, he was the master of all he surveyed. However, there is nothing he enjoys more than a good battle. Races are usually 15 minutes plus a lap. Conditions also play a part – when it's wet and mucky, the bike is harder to control as it slides around.

His mechanic is none other than his dad, Peter, who is also his means of transport to and from events. Fin’s coaching, however, is left to one of the best in the business.

‘We are lucky as well in that Stuart Edmonds, who is a Dubliner and races mainly in the UK, coaches Fin,’ said Peter.

Fin added: ‘He is very experienced and shows me where I can get a better line and also how to improve my technique.’

Like any form of motorsport, it’s expensive. Currently, his sponsors are Gavin Craige of CCM Racing and Steve Mills of GOMX 365. Both Fin and Peter would love to secure sponsorship from a local Cork company.

Of his son’s liking for motocross, Peter said, ‘He takes it in his stride – I think that is one of his strongest points. He isn’t flustered. If he gets a bad start he can work his way through the field, others would beat themselves up in the same scenario.’

His coach Stuart Edmonds gave his appraisal: ‘I’ve had the pleasure of coaching Fin for a good few years now and his ability on a motocross bike at his age still amazes me. He has an incredible style on the bike and always continues to progress every year in his championships, especially the UK series.

‘If he continues to grow in the sport like he is now, I can definitely see him in the World Grand Prix series. I will continue to work with Fin as long as I can to help him get to that level and gain the confidence to do so.’

Another different sport and another top talent in West Cork, and Fin – who has a busy season ahead with the Irish and British Motocross Championships – celebrates his 15th birthday on Sunday.