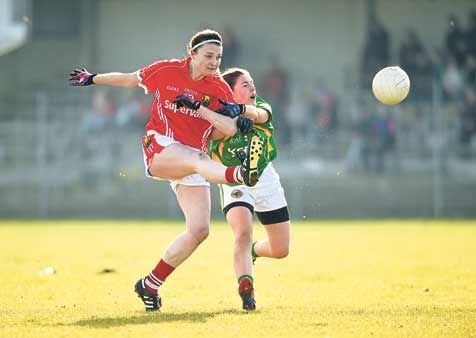 FOR the 11th time in 12 seasons, Cork successfully negotiated a ladies’ national football league semi-final, albeit in a less swashbuckling fashion than they are more accustomed to.

Still, the reigning champions successfully strangled a talented Kerry forward line at Dromcollogher on Sunday to set up a league final encounter with Galway.

Manager Eamonn Ryan will look to guide the Rebels to the three-in-a-row on May 9th and were it not for a blip in 2012, when Monaghan defeated them, they would be looking for their eighth in a row, such is their dominance of this competition.

However, Galway – who demolished Dublin in the other semi-final last Sunday – have yet to win a Division 1 title, having lost their last two outings to Cork in 2005 and 2010.

‘It was important that we won (on Sunday). A lot of the younger players are making their way onto the main team and it can be tough to make that transition and still keep winning,’ Cork boss Ryan said.

‘Kerry were really up for it and we had to defend really well. The players showed great character. We went ahead at a vital time and kept control of the matter. They scored nothing from play in the second half and any day your players can manage that is a good day.’

Heading into Sunday’s semi-final there was a quite air of confidence in the Kingdom that Alan O’Neill’s new revolution was gathering pace and with a respected backroom team in former Kerry footballer Sean O’Sullivan and former Dr Crokes manager Harry O’Neill they were set up for a contest.

Cork captain Ciara O’Sullivan fired over the first point of the afternoon within 34 seconds of the start, and it much have been an emotional score for the Mourneabbey player as both sides observed a minute’s silence for O’Sullivan’s former teammate, the late Karen Buckley, just before the game.

It was to give Cork a brief lead as Louise Ni Mhuircheartaigh fired the over equaliser in the next attack. It set the pattern for the first half.

The sides were level on five occasions up to the 29th minute before Kerry edged ahead with a punched point by Louise Galvin, but a brace of points from Aisling Hutchings and Briege Corkery, inside 40 seconds, gave the league champions a 0-7 to 0-6 lead at the break.

In a contest that proved exceptionally tight, not for the first time Valerie Mulcahy’s influence was evident. Despite getting little change from Aisling Desmond in open play, her accuracy from placed balls was unerring.

Within six minutes of the restart, the Rockbán player added a further three points to her afternoon’s work and helped Cork into their biggest lead of the day, 0-10 to 0-7.

Cork were now in the ascendancy and despite Kerry enjoying more possession, there was no way through a Cork defence that saw Vera Foley and Roisin Phelan dominant.

Ni Mhuircheartaigh got Kerry back to just two points with ten minutes to play but points from Flynn, O’Shea and Finn at vital times kept the daylight between the teams, but matters could have been so different had Ni Mhuircheartaigh’s 41st minute effort not hit the butt of the post and came back into play when she had Cork goalkeeper Martina O’Brien beaten.

However, near misses don’t move the scoreboard and Cork strangled Kerry in the final few minutes to put down an early marker against their neighbours who they will meet in ten weeks’ time in the Munster final.

CORK ladies’ football manager Eamonn Ryan expects a huge test when his league champions take on Galway in the league decider on May 9th.

‘We played them earlier and it was a fine game. We were blessed to get out ahead as they had a number of goal chances. It will be a different test and one we must prepare for as Galway are a real upcoming team full of talented young players,’ Ryan said.