Pat Sutton, a member of Dunmore Golf Club, sinks his putt on the final hole during the final days of the club. Also included are, from left, Fergus Coleman (club captain), Jerry Lehane, past captain and president and John Minihan (club president). (Photo: Martin Walsh)

YEAR ends are nostalgic for a variety of reasons. On the final day of 2021 Dunmore Golf Club – located just outside Clonakilty town – ceased as a sporting entity after some 54 years. For over half a century, local golfers and those from other locations enjoyed this unique West Cork facility.

Cries of ‘fore’ may have drifted towards the Atlantic Ocean rather than inland, and possibly some golf balls too, but Dunmore was much more than just a golf club.

The nine-hole course was officially opened in July 1967 by the then president of the Golfing Union of Ireland, Tom O’Donnell. Just two years earlier and thanks to the vision and imagination of Derry and Mary O’Donovan, a bulldozer from Willie (William) O’Brien helped transform farmland into a beautiful but demanding course designed by Mallow’s Dick Barry, whose blueprint was preferred to those of then world-famous golf architect JD Harris.

It’s worth noting that the club was instantly recognised by the GUI. Again, more vision.

Indeed, Dunmore Golf Club was a catalyst in putting West Cork on the map before many festivals and other organisations that have since promoted Clonakilty and ensured its status as one of the premier destinations in Ireland.

Statistically, Dunmore Golf Club is three miles outside Clonakilty town and only 45 minutes from Cork via the N71. Its website described it as a course to test all levels of golfer and it had all levels of golfer. But perhaps its best marketing strategy – not that it was ever needed – was the breathtaking views of the Atlantic offered by the challenging nine-hole parkland course.

Carol Barrett (O’Donovan) had a tear in her eye when she recalled those early days. She was just four years old when the course was opened.

‘Back then, I think people truly valued the resource that was given to them by my parents. In many ways my parents were before their time. Yes, of course it was a unique location but it was built without grants. My parents gave their heart and soul to this entity. Remember, we were farmers, it (Dunmore House) was also a home, but there was great loyalty and support within the community,’ Carol explained. 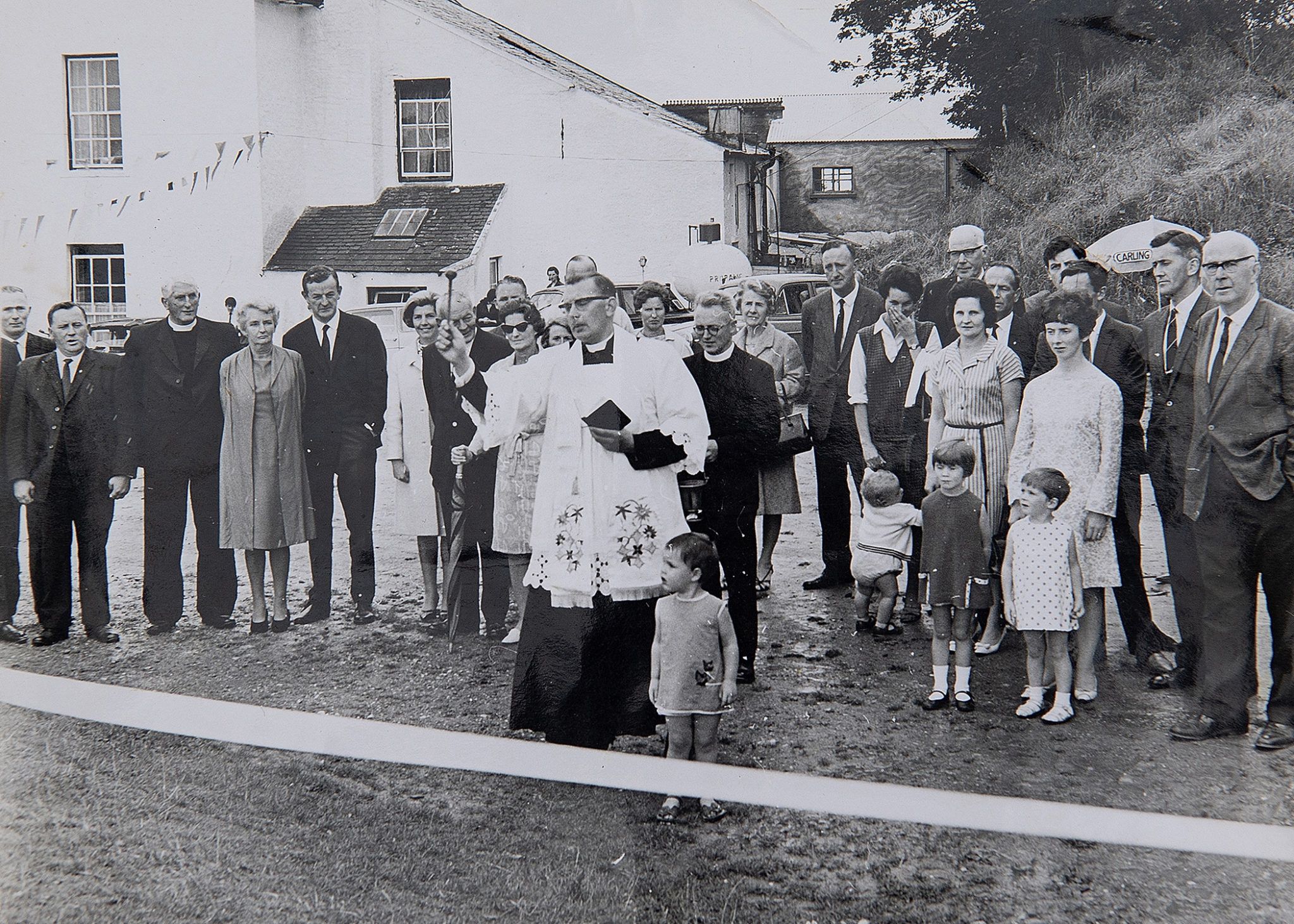 Carol Barrett (second child from the right) at the blessing of the course (by Fr Dan McCarthy C.C.) on the opening day in July 1967. Also included is Carol’s mum, Mary (first lady from right). Tom Neville, the first club president is pictured on the extreme right with Dave Daly alongside. Carol’s sister, Claire, is pictured to her left. Also included are Martin Lenihan (second from left), Nora Neville (first lady from left) with Charlie and Mary Shinkwin, Also included elsewhere are Jack Murphy, John L O’Sullivan TD (at the rear with glasses), Shamie O’Donovan and Derry O’Donovan (partially hidden).
(Photo: Courtesy of the Barrett & O’Donovan families)

Walking off the ninth hole at the end of December last, club president John Minihan, club captain Fergus Coleman along with Pat Sutton and Jerry Lehane weren’t at all downbeat, even if it was the last time they had swung and putted around what was their home course. They knew that this day was coming. In fact, it was inevitable as the 54-year tenure came to an end.  They are realists as Fergus Coleman explained.

‘Unfortunately, from a commercial, numbers and demographic perspective, the club came to the difficult decision a couple of years ago to have what we call an ordinary wind-up of the club. Yes, it’s a very sad day, but equally as I have said to many people during 2021, we have had a wonderful year as we have known this was coming for a while,’ Coleman said.

The fact that the decision wasn’t a spur of the moment idea means that everyone involved had time to process the decision. Members even drank a few pints over it and most of the members have already found pastures new.

It also allows for expansion to the hotel as Carol Barrett added, ‘The development of the hotel has been curtailed by the golf course. Car parking is to the front of house and landscaping was curtailed. But the club made the decision that it wasn’t viable anymore, so the die was cast.’

Future development will include a 15-bedroom block, landscaping of the first tee, the clubhouse will be transformed into a reception area for weddings and other functions. Walkways, trees, flowers and perhaps even some paddocks are also part of the long-term plan. 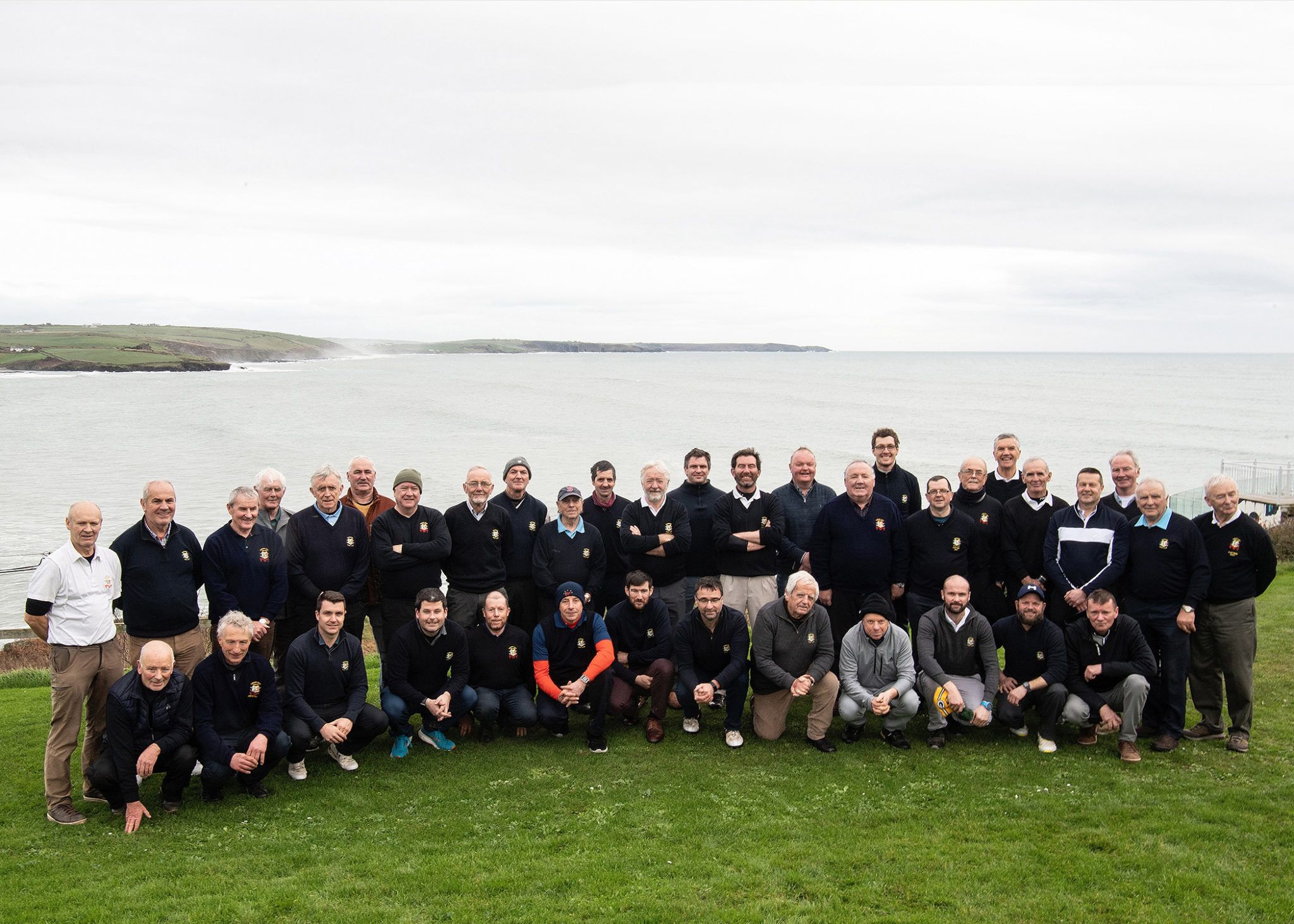 Members of Dunmore Golf Club after they played the course for the final time at the end of December. (Photo: Martin Walsh)

As members played Dunmore for the final time, conversations turned to their new golfing homes, but importantly Coleman added, ‘We have decided to keep the Dunmore name alive and we will have the Dunmore Golf Society.’

Naturally, many departed with heavy hearts but they take wonderful memories. Club president John Minihan added, ‘I am reminded of what a former member, who has since passed away, said to me once, “no matter what was going on in our lives, good, bad or indifferent, we always had Dunmore”.’

Golfing has changed down through the decades but many things stayed very much part of the fabric of the Dunmore Golf Club. Richard Barrett recalled those initial years.

‘From 1967 to 1984 when the clubhouse was redeveloped, the clubhouse was in the stalls and dairy, that part was developed by Mary and Derry and that is where the club nights were held. They were great nights because there were so many local characters and great sing-songs. The rugby golf classics in the 1980s was a major annual event run over a weekend; many rugby internationals played and then enjoyed the overnight stay,’ Barrett said.

‘Events such as the West Cork Senior and Junior Shields were very important. Most teams would have a meal together – Dunmore was always recognised as one of the best places to come to for a match. Clubs like Glengarriff, Bandon, Kinsale, Skibbereen Kenmare and Macroom all loved coming to Dunmore. They also knew they would always get a good meal.’

‘We have made wonderful friends out of this club. It’s more than a golf club.  I joined this club 40 years ago as a young kid, I wasn’t from a golfing background but I was made so welcome. My colleague and club captain John Minihan would share that experience as well. Dunmore was always a welcoming club to everyone in West Cork, it always had that reputation,’ Coleman explained.

Dunmore attracted many of the playing members of Clonakilty GAA, who enjoyed strong links with the club. Indeed, former Cork captain Brian Murphy grew up playing golf around Dunmore as did many others within the Clonakilty senior football team.

It was also a generational thing as John Minihan outlined: ‘My dad, Michael, was a founding member and long-time secretary of the club. He ended up on the Munster branch of the GUI proposed by Dunmore and seconded by Bandon GC.’ 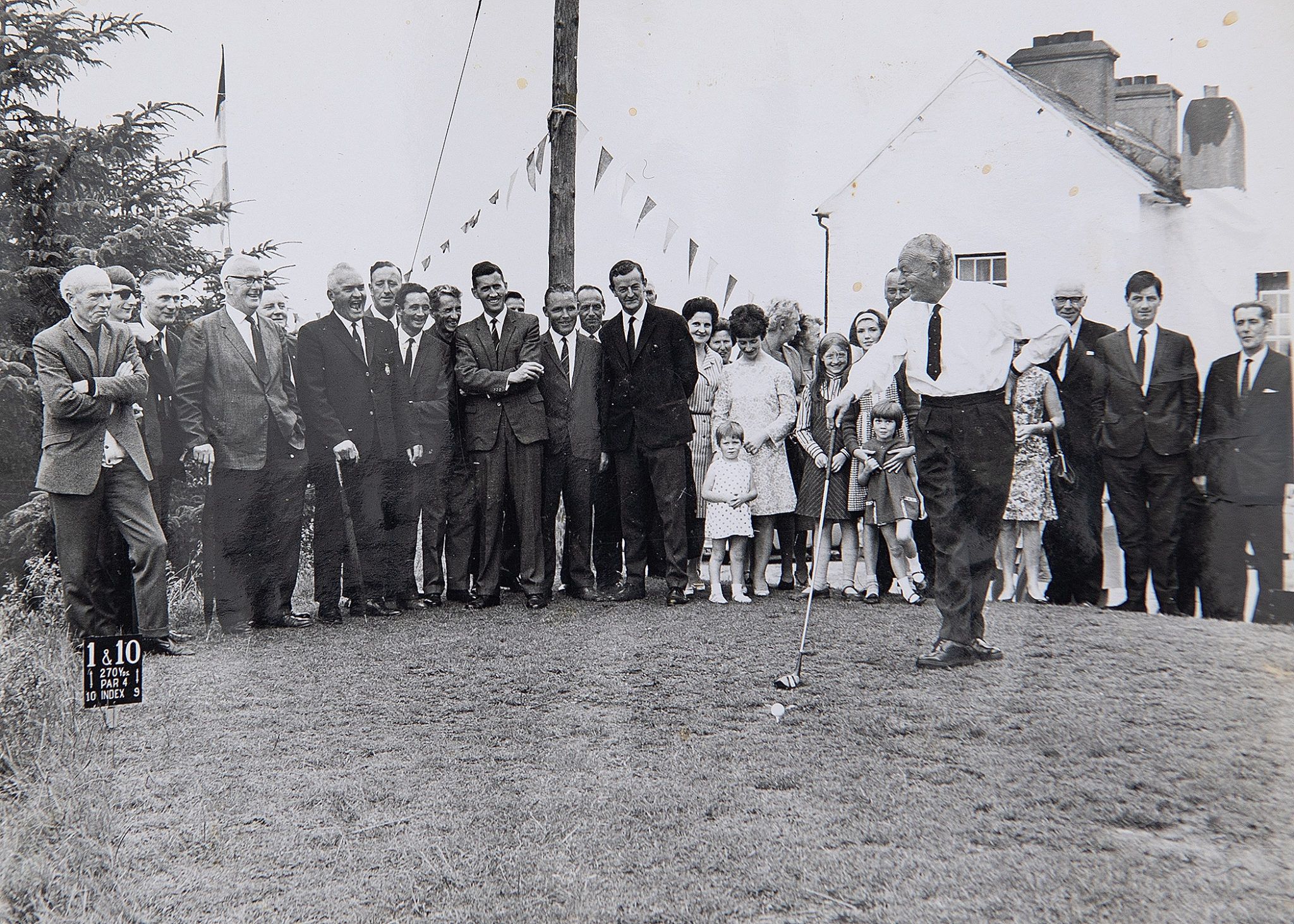 President of the Golfing Union of Ireland Tom O’Donnell at the first tee on the opening day of Dunmore Golf Club in July 1967.
(Photo: Courtesy of the Barrett & O’Donovan families)

As Minihan looked around the breathtaking surroundings, nostalgia flowed like the calm waves beneath.

‘My first experience coming out here playing with my Dad was of Charlie Shinkwin, a local dentist, playing with people like Johnny Walsh, who worked for Pat Sullivan as a builder and the two of them slagging Jim Brooks across the bar. There was never an elitist element to Dunmore, it was just local people playing and enjoying the facilities here,’ Minihan recalled.

Dunmore was also a facility to raise funds and aside from Clonakilty RFC, the local GAA club, organisations like the COPE Foundation and Mount Carmel (Clonakilty Community Hospital) benefitted significantly. Games against other West Cork clubs were also an important element within Dunmore, who won the West Cork Shield many times. Their ladies won, too.  The competition gained momentum very quickly and Frankfield, Lee Valley (Cork) and Kenmare were added as opponents. Dunmore also won the Munster County Clubs.

The upkeep of the course involved many resources, Coleman said.

‘In recent times we had Martin White, known locally as ‘The Shark’, and many of our club members will know exactly why. He’s been with us for the last 20 years. Before that Martin Wise was assisted by Jim O’Connor and there was John Collins, Johnny Walsh and Noel Flynn.’

He added: ‘It’s not just about cutting the grass, there is maintenance, rebuilding tees, expertise and often the latter was provided by members themselves.’

Since its inception in 1967, the course has been slightly adapted to allow for the modern golf ball. In its heyday, Dunmore had up to 500 members. Last year, that number had dipped considerably.

The wonderful and life-long friendships seemed to be the common theme running through Dunmore. Coleman remarked, ‘Golf has helped with mental health, great memories and great friends.’

He added, ‘The social life in the 19th hole was exceptional.’

Discussion of that era brought a response from the club president John Minihan.

‘One time it was not considered to be a good captain’s prize unless you came home in the light of the morning.’

On the club’s memorabilia, Coleman declared, ‘We have maintained everything because we think there might be a home for it in the local museum. Some of the trophies that we won’t be playing for will be returned to the families of the founder members.’ 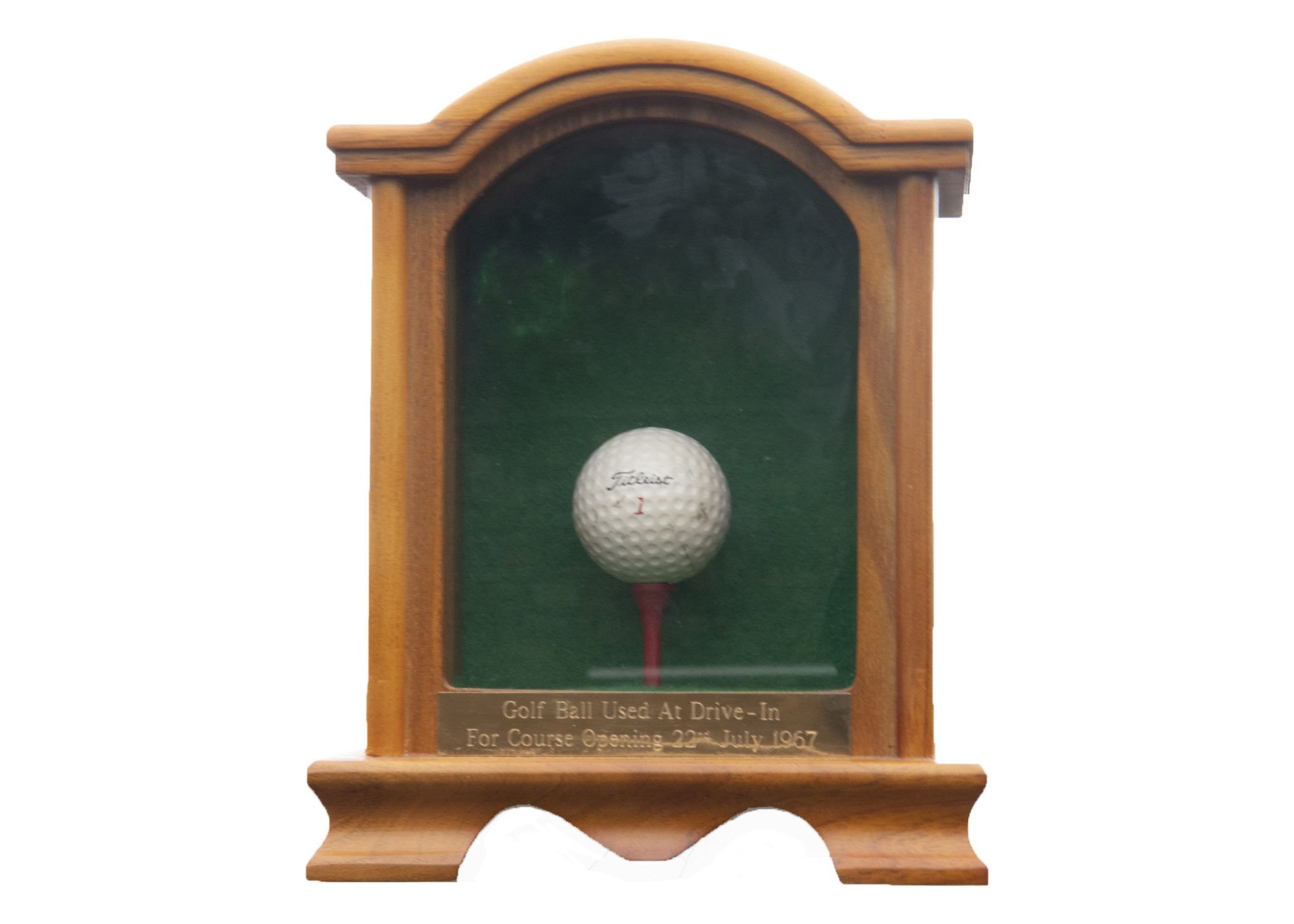 The golf ball used for the drive-in at the opening of the course on July 22nd 1967.

A book about Dunmore Golf Club is also a possibility.

‘We had our 50th anniversary four years ago, so maybe (a book), who knows, we may delve back into it.’

As many of the members have already found new pastures in places such as Lisselan, Skibbereen and Bandon, essentially it will be the same group of people playing golf together.

‘We are sorry to be leaving this wonderful place, it has given us wonderful memories, however, it’s come down to a commercial decision that we couldn’t keep the business going. Everybody understands the reality of modern commerce.’

On its Facebook page, the Dunmore Golf Club posted, ‘To Carol, Richard and all at Dunmore House Hotel, thank you for everything you have done for the club over the years. The support shown has been great and we wish you all every success in the future.’

Carol and Richard Barrett summed up the Dunmore Golf Club.

‘It was a challenging course, the great thing it had were the spectacular and uninterrupted views of the Atlantic Ocean. It was often said, if you could play Dunmore, you could play anywhere.’

And that was all made possible thanks to the vision of the O’Donovan and Barrett families. Those that played Dunmore were truly fortunate. Memories to the fore.