Celebrations: The Dunmanway team that won the South U16 Development League final on Sunday. 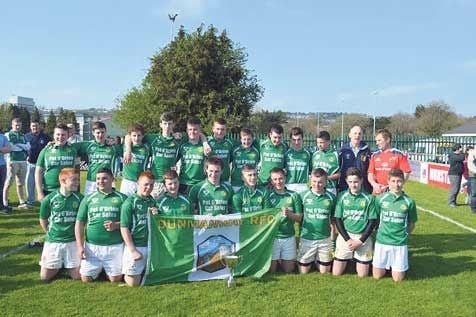 Celebrations: The Dunmanway team that won the South U16 Development League final on Sunday.

DUNMANWAY rugby won the South U16 Development League final against Charleville in the PBC grounds in Wilton last Sunday.

Having narrowly defeated the same opposition in the group stage, Dunmanway and their large group of supporters travelled with a little bit of fear that things might not go their way.

When they fell behind to a well-worked Charleville try after ten minutes their fears were well grounded.

But this group of players have shown great resilience all year and this score seemed to spark them into life. With Ashley Deane taking the game by the scruff of the neck and some astute kicking by Podge Burns, Dunmanway worked their way up the field and after numerous assaults on the Charleville line, Ashley crashed over to tie up the scores.

Charleville’s back line looked very dangerous and it took some excellent last-ditch tackles by the outstanding Eoin O’Sullivan and Denis McCarthy to keep the score the same until first-half injury time.

Again, Dunmanway laid siege to the Charleville line and Jamie McCarthy showed great strength to barge over to leave the half-time score 12 – 5.

In the second half Charleville tried to use the breeze to pin Dunmanway back but every time they kicked up field it was ran back by the Dumanway back three, where Jack Kingston and Brian O’Sullivan were excellent.

It was from one of these marauding runs by Jack that set up a good attacking position for the boys in green and from the ensuing scrum Jamie Kearney took half the opposition pack with him to score a great try.

Try as they might the north Cork men could not get out of their own half.

One of their attempted clearances was blocked by the mighty Ashley, which he caught and raced away to score the insurance try.

Charleville never gave up and finished the game on the attack and were very unlucky not to score with the last play of the match.

This was an excellent Dumanway team performance. The pack was outstanding with Luka Dugandzie and Killian McCarthy brilliant in the scrum and Dermot Hayes, Mikey Kelly and Zack Casey outstanding in the loose.

Denis O’Sullivan, in his first season as a scrum half, has improved with every game and likewise Bill Murphy at inside centre.

Dunmanway coach Charles McCarthy can be well pleased with his season’s work and very satisfying to cap it off with the much coveted league trophy.