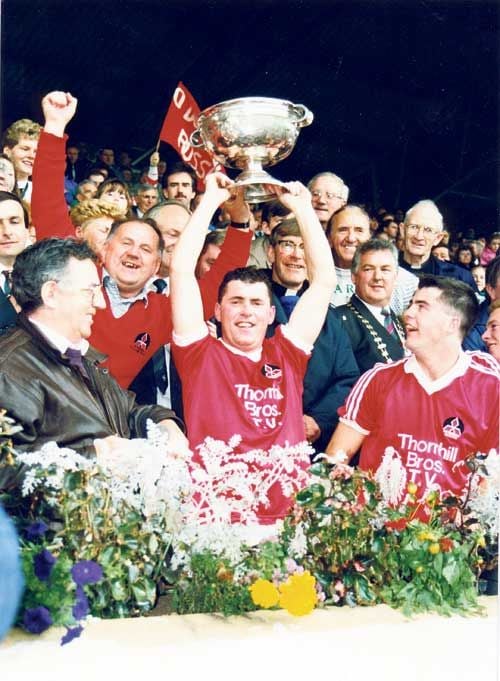 DESPITE a growing internet campaign to have a stand in the redeveloped Páirc Uí Chaoimh named after two late Cork GAA stars, the county board has told The Southern Star that the ‘naming of stands is not under consideration’.

Belgooly’s JJ Hurley launched a social media campaign suggesting that a stand in the new Páirc Uí Chaoimh be named in memory of the late Mick McCarthy, of O’Donovan Rossa, and John Kerins – both former Cork footballers died tragically at a young age, with Small Mick remembered as a legend of West Cork GAA.

The campaign has gathered pace over the past few weeks and its Facebook page has almost 2,000 ‘likes’ to date.

When The Southern Star contacted the Cork County Board regards this current campaign, the following response was received: ‘naming of stands is not under consideration’.

The man behind the idea, JJ Hurley, agrees that there are so many individuals deserving of a similar honour that it would be ‘a hard call’ to select just two former Cork stars to name a stand after.

‘I can certainly see their point, with names such as the late Con Murphy, Sean McCarthy and JJ Walsh coming to mind but I do think McCarthy and Kerins are unique,’ Hurley said.

‘They were lost at such a young age, at least others had the opportunity to fulfil a lifetime of service to the association.’

The Belgooly man has also suggested that as the revamped Páirc Uí Chaoimh stadium nears its completion over the next few years, it might be a novel idea to stage a public competition similar to a recent a campaign in Dublin where following a public vote a new bridge over the Liffey was named the Rose Hackett Bridge.