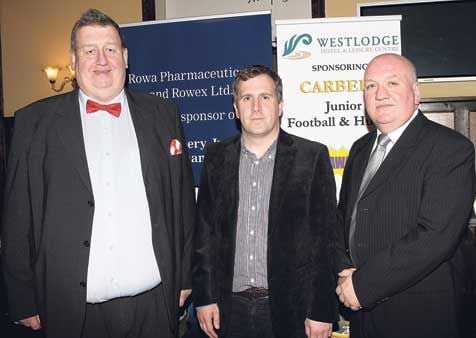 HAVING begun last weekend with two games, the Rowa/Rowex South West junior A football championship continues this weekend with four games down for decision.

The top clash features last year’s runners-up, Gabriel Rangers, against up-and-coming Ballinascarthy. There is added spice to this clash as the sides met last season when more experienced Gabriels came out on top but later lost a replayed final to St Mary’s.

Bal compensated by winning the South West U21 B football championship and their junior team was composed mostly of those junior players.

‘Those players are now a year older and wiser and we will look to Chris Ryan, Cillian Cullinane, Ricky Flynn and captain Jeremy Ryan for big games. Young players like Sean Ryan and Daniel O’Brien might also get a run but we will be without the injured Eoin O’Brien,’ said Bal manager Kevin Kingston.

The team has been doing extremely well in section 2 of the league, winning four out of five. Niall Twomey trains the team, with Kevin Kingston, Barry Hanrahan and Eddie Lyons as selectors.

Gabriels will again field one of the most experienced teams in the division and will hope to go a step further than 2014. Patrick Hodnett continues as manager from last year and will be boosted by the winning of the U21 C football championship this season.

However, numbers are very tight at the moment with Tony Sheehan and Gary O’Callaghan having retired, Stephen O’Mahony abroad and John O’Callaghan exam-tied.

They can still call on talented forwards Mark Cronin and Eddie Goggin, with the evergreen Pat Nolan still going strong while Ger O’Callaghan, Chris Moynihan and young players like the Moynihans, Sean Kelleher, Fionn Hurley and Paudie Hegarty will all play a part this season.

Sunday, May 3rd, in Clonakilty, 2pm

The local derby clash between the two saints, Oliver Plunkett’s and James, in Clonakilty on Sunday should provide an entertaining hour between two sides who would harbour notions of doing well in the championship.

Plunkett’s have come agonisingly close to winning the title in recent years but have still to make the big breakthrough, while the Ardfield side have also yet to win their first A title.

‘The team is trained by John Fitzpatrick,’ said Plunkett’s dual manager Derry Crowley, ‘and we will field all the players who have done so well in recent years in both football and hurling.

‘The O’Driscoll brothers, the Coffeys, Keith O’Driscoll, Michael Keohane and Conor McCarthy are all still going strong. While we are stuck for emerging minors, young players like Niall O’Driscoll (fifth brother in the family), Sean O’Donovan, Darragh Coffey, Shane Hillard and John Mears are all coming through.’

Last season Plunkett’s beat the eventual champions, St Mary’s, in the first round but eventually fell to Gabriel Rangers in a replayed semi-final. They report injury-free for this clash.

On the other hand, St James will be missing a couple of regulars with goalkeeper Diarmuid O’Donovan away for two years and a few injuries slow to clear up.

‘Last season we lost to both Tadhg MacCarthaigh and Clann na nGael before beating Newcestown in a relegation battle. We will be anxious to avoid that road again.’

Conor Hegarty trains the side with Finbarr McCarthy and Diarmuid Keohane as helpers and Aaron Hayes, Sean Goggin and Peter Walsh, who lined out for Clonakilty Community College, are the young players who might get a championship start.

Two unfancied sides, Barryroe and Bantry’s second string, will meet in Ballinacarriga and even though neither are looked on as potential championship, they should provide a balanced contest.

It is 21 years since Barryroe last contested a junior A football final, losing in 1994 to neighbours Argideen Rangers but hurling afterwards took over as they progressed to intermediate ranks.

‘A big effort was made in football last year,’ said manager Richard Murphy, ‘and we had good wins over Castlehaven and Clann na nGael but then everything that could go wrong against Bandon went wrong and we lost that one.

‘The dual commitment is tough and it’s about 60/40 in favour of the hurling at the moment. We’ve played six league games. We’ve won two and drawn one.

‘Eoin O’Mahony from Clon is coaching the side and we have lost a few good players from last season, like the O’Brien brothers, Bernard and Mike, who are concentrating on work. We can still depend on the older stalwarts like Jason Fleming, Timmy Carroll and Tadhg Harrington, who is the captain.

‘We have a few good young players breaking through like Jack Cahalane, Conor Madden in goal and Mark Crowley. We know Bantry will be very tough and they have been kicking massive scores in the league.’

Bantry last won the title in 1985 with their second squad when veterans Hunt and Barron provided the class but while winning titles since in junior D, they have failed to make an impression in junior A as their intermediate teams struggles in that grade.

It is almost impossible to predict what kind of team they will field for this game.

‘We did kick big scores in a couple of those games but the opposition was weak and our top scorer, Shane McCarthy, will probably be used by the intermediate side on Friday night. We could actually lose about half the team we have now to the intermediates.

‘Last year we beat Newcestown but then lost to Dohenys. We will be missing a few good players like Kevin Casey because of exams but should have Eoin Lynch back after injury. Young lads like Henry Deane and Ronan O’Mahony could be called up.’

The Blues won’t be short of experience on the sideline with Gerdie, Timmy O’Mahony and Mick Moran guiding the ship.

Verdict: Barryroe to prove too strong all round for what should be a very young Bantry side.

There’s a dark horse in every race and this clash between Diarmuid Ó Mathuna and Ilen Rovers’ second team will prove whether Mathúnas are the dark horses of this campaign.

They won the B county in 2012 and were finalists in this season’s U21 B championship as football continues to improve in the club.

Mick Lordan and Tony O’Driscoll are the trainers of an enthusiastic team which will look to Sean Crowley, Ted Lordan and Barry Lordan to lead the way.

They will also be able to call on the best of their U21 team, with players like Kevin O’Donovan, Sean Buttimer, Jack Cahalane and Stephen Moore all ready to make the breakthrough. Last season they did very well to reach the quarter-final, losing narrowly to eventual champions, St Mary’s.

As a second team it is hard to know how good Ilen will be. The club is very tight for numbers at present and the juniors train with the seniors.

‘We have played five league games and have won only the first one against Clon,’ said manager Dominic Casey.

‘Last year we lost to both Clon and Argideen but just avoided relegation by beating Dohenys. We won’t know what team we will field until after the senior game on Saturday against Nemo but Brendan Duggan, Teddy Hickey, Brian Leonard and Donal Collins should figure.

‘The best of the U21 side will play senior and we will have to wait to see what’s left. We also have a few injuries at present. It’s three or four years since we last played Mathúna’s and beat them in a replay but they have been doing very well in football recently.’

Dominic Casey, Martin Bohane, Anthony Evans and Donal O’Donovan are the men in charge of the team this season.

Verdict: Mathúna’s to confirm their rising status as a power in South West football with a narrow win.