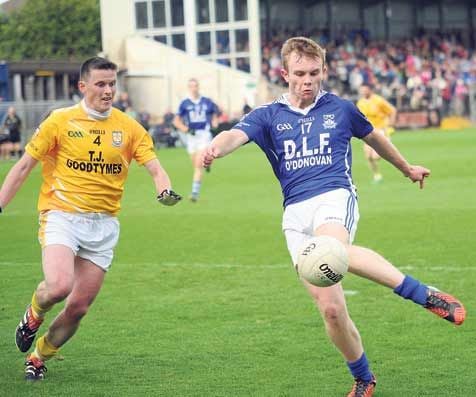 On target: Kilmeen’s Damien O’Gorman scores a cracking goal before Grange’s Brian Cashman can get in a challenge during Friday night's county final

RAY Collins certainly played a captain’s part in Kilmeen’s triumph, his powerful and purposeful running from wing back serving to put additional pressure on an already overburdened Grange defence throughout the game.

He began the move that led to Kilmeen’s first goal from Darren O’Gorman, he was also involved in the build-up to points from Darren Santry and Shane O’Donovan before the break, while it was after his ferocious shot rebounded off the crossbar that O’Donovan pilfered the fourth goal early in the second half.

Collins was reluctant to accept too many plaudits afterwards, however, stressing it was basically a five-star team display that paved the way for Kilmeen’s emphatic win.

‘I’m absolutely delighted with the way we played tonight, we didn’t have a weak link, and it’s great to get the job after the hard-luck stories we have had over the past few years, losing two county finals,’ Collins said.

‘It was particularly tough last year, beaten by a last-minute goal against Castlelyons, but we made our minds up at the start of the season that if we got to the final again, we wouldn’t leave the title behind us.

‘It’s great to win it at the third attempt, but this is just a stepping stone going forward as far as we’re concerned.

‘We have a very young team, and a lot of the lads will be involved in a county U21 B final against Kilnarmartyra in a few weeks time, so hopefully this will be a great boost for them.

‘There’s a very good underage structure in the club, and we have been playing junior B football for far too long, so it’s great to get back up to junior A where we believe we belong,’ he said.

Collins accepts it isn’t going to be easy for Kilmeen to make an impression in a higher grade, stating that junior A football in the Carbery division is extremely competitive.

‘We know we are going to have our hands full up there, but we’ll be giving it our all when we move up next year, and we’ll wait and see what happens,’ he said.

‘As I’ve said, we played some great football (on Friday night), but we knew we were capable of it following a big win over Kilbrittain last week.

‘As long as we performed to the same level again, we were always going to take a lot of stopping. If anything, we probably raised it another notch or two, and I’d say the hurt from our last two final appearances stood to us,’ he said.