Celebrations: Clonakilty's David Lowney celebrates after scoring a late goal against Newcestown during the Clona Milk U21 A football championship semi-final at Enniskeane on Sunday. 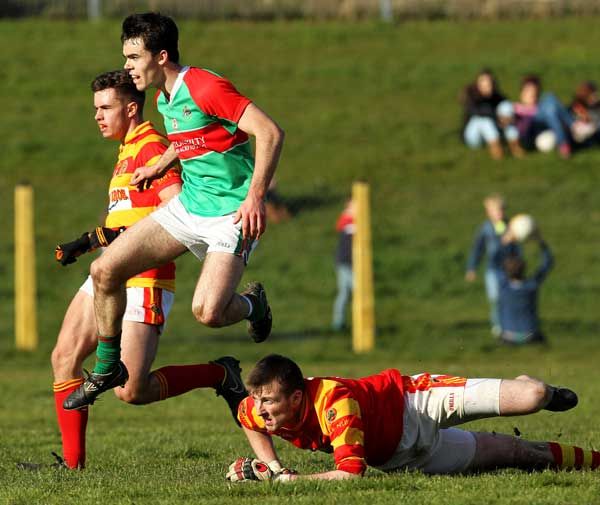 Celebrations: Clonakilty's David Lowney celebrates after scoring a late goal against Newcestown during the Clona Milk U21 A football championship semi-final at Enniskeane on Sunday.

CHAMPIONS Clonakilty will take on Castlehaven in the 2015 South West U21 A football championship final following their respective semi-final wins on Sunday.

It will be the third year in a row that these two clubs have met in the South West U21 A final, with Clonakilty convincing winners in the previous two finals.

On Sunday in Enniskeane, Clonakilty were pushed all the way by Newcestown before they eventually won 1-12 to 1-7, thanks to a crucial late scoring burst in the final five minutes.

While Newcestown led after 58 minutes, points from Sean McEvoy and Jack Cowhig, and a David Lowney goal, swung the game in the champions’ favour.

Earlier in the day, Castlehaven needed extra time to beat Ilen Rovers 2-17 to 2-10 in a game that was marred by an ugly melee on the full-time whistle.

Rovers had led by three points with six minutes left before Castlehaven stormed back, with Michael Hurley leveling the game, 0-13 to 2-7.

Ryan Foley and Conor Cahalane scored the crucial goals for Castlehaven in extra time but a special mention must go to Ilen’s Stephen Leonard who kicked 2-6 in a man-of-the-match display.

Don't miss Thursday's Southern Star sports for all the reaction from the semi-finals plus a preview of the 2015 final.