Hands on: O'Donovan Rossa's Donal Óg Hodnett blocks a shot from Clonakilty's Dave O'Regan during the Cork SFC round two game at Rosscarbery on Sunday. 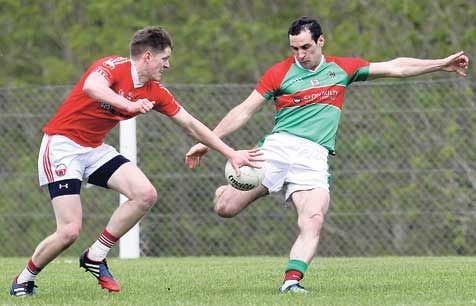 Hands on: O’Donovan Rossa’s Donal Óg Hodnett blocks a shot from Clonakilty’s Dave O’Regan during the Cork SFC round two game at Rosscarbery on Sunday.

SHELL-SHOCKED Clonakilty were slow to air their views in the aftermath of their second heavy defeat in the county senior football championship – a comprehensive 2-15 to 0-10 beating by Skibbereen side O’Donovan Rossa in Rosscarbery on Sunday afternoon.

Selector Padraig White did admit that they were fearful for the future. ‘It was one of those days when nothing went right for us,’ said White. ‘We thought we had prepared very well during the last three weeks, but physically Skibb were way ahead of us today, faster, sharper and showing much greater intensity.

‘We decided to go man-for-man today, fifteen against fifteen, but they seemed to get physically stronger as the game wore on. They seemed to be on top all over the pitch and we tried several switches to nullify their top players but there was no holding them.

‘The injuries were unfortunate, but the penalty was vital at the start of the second half. I suppose if we had scored that, it might have changed the game for us. We have to regroup now, review it on the training pitch and try and get back into the championship.

‘We have one more go at it. If we don’t win the next day, we’ll be in relegation trouble and I would be fearful for the future then. We don’t want to go there; it’s something we haven’t even mentioned to the players. It’s staring at us now, we know what we have to do and we have a battle on our hands.

‘Last season we held a football forum in the club and there was a great response to the meetings. The goodwill factor was excellent.

‘We started training last November, the U21s, seniors and juniors all together and it was working very well. But it just hasn’t been happening on the pitch, we haven’t done ourselves justice in the championship. Some of our players have a lot of football played in the last few months, some are carrying injuries and some are looking very flat.

‘There’s no doubt we have some hard work ahead of us in senior and junior.’