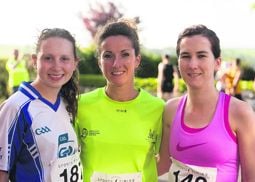 CARMEL Crowley continued with her preparations for the upcoming World Masters’ Athletics Championships by retaining her title at the Courtmacsherry 10km, although her winning time of 39:11 was well outside the 37:50 she ran last year.

‘I’m training hard at the moment and I was tired coming into the race,’ said the Bandon athlete.

‘I did 37:46 in Dunmanway two weeks ago which is a tougher course but I’ve been doing a lot of speed training at the moment in preparation for France so that’s why the legs were tired tonight.’

Crowley – who uses the Courtmacsherry and Timoleague roads as part of her long training runs from home in Cregane – finished over a minute ahead of Una Plant from Kinsale with Anna O’Neill of the Doheny club in third.

Owen Casey of Leevale followed on from his clubmate Cillian Ó’Tuama when winning the men’s race. He led all the way to cross the line in 34:03, just three seconds slower than Ó’Tuama recorded 12 months ago.

This was the Carrigaline man’s first race since the Cork Marathon where he finished seventh in 2:34:14.

That came seven weeks after running a similar 2:34:41 for the distance in Rotterdam and the Donie Walsh-coached runner will now set his sights on the Dublin City Marathon in October.

Michael Harrington from Bantry, winner at Allihies the week before, finished second, a minute behind the winner with Eagle man Alan O’Brien, who won the Inniscarra four-miler the precious Friday, taking third spot in 35:13.

It was a good night all-round for the Eagle club as Pat O’Connor (M45), Roland Boland (M50) and Richard Piotrowski (M60) were first in their categories and the they also won the team award.

For Polish-born Piotrowski, who was one of the top runners in the South of England during the 1960s but who now lives near Macroom, his time of 39:57 was only four seconds outside the Irish M65 record held by Christy McMonagle from Derry.

The eighth annual race on the flat route out to Timoleague and back attracted over 320 runners on an ideal evening and was once again expertly organised by the Courtmacsherry Rowing Club.