Confident: Bandon striker Richard Holland believes the West Cork club will get the result they need to guarantee their return to the MSL Premier Division this Saturday. 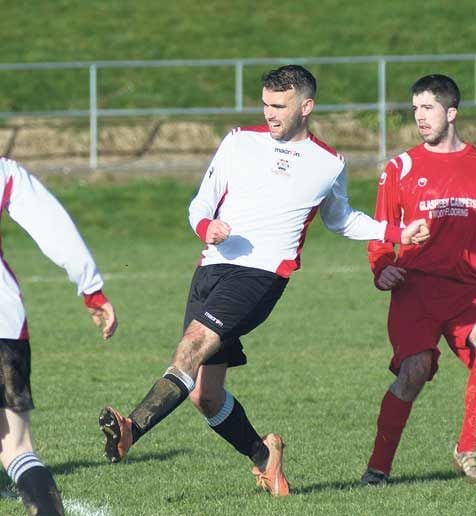 Confident: Bandon striker Richard Holland believes the West Cork club will get the result they need to guarantee their return to the MSL Premier Division this Saturday.

BANDON could make a first-time return to the Munster Senior League (MSL) Premier Division this Sunday.

The West Cork club is on the cusp of promotion from MSL Division 1 as they host Mayfield United this Saturday, in the Town Park at 2.30pm, knowing that a win will guarantee their return to the top tier.

Three teams – league leaders Bandon, Blarney United and Mayfield United – are battling for the two promotion spots, with the title up for grabs, and Saturday’s home game in Bandon will be a defining match, no matter the result.

Building up for a dramatic end to the season, Saturday’s home game is Bandon’s final league match. Blarney, one point behind Bandon, have one game left to play, and crucially, it was on Wednesday night against Mayfield, who are two points behind Bandon but with two matches to go, including that mid-week crunch clash.

No matter the result of the Blarney v Mayfield tie, Bandon know what they need to achieve this Saturday – it’s all about the victory, as their experienced striker/assistant manager Richard Holland (28) told The Southern Star.

‘We are just concentrating on Saturday and our own performance. Whatever else happens will happen. Obviously the Mayfield and Blarney game is out of our control, so we are looking after ourselves. Two teams go up and we want to make sure we are one of those. We are going for the win,’ Holland said.

An immediate return to the MSL Premier Division – either as champions or runners up – is on the cards for table-toppers Bandon, who endured a rough maiden season in the top flight after their historic promotion two years back, but Bandon man Holland believes the club is set up to mount a better challenge next season, providing they finish the job this Saturday.

‘Promotion would mean a great deal because it would just be our second time competing in the Premier Division, if we get there,’ Holland said.

‘The experience wasn’t a great one but it means that we’d be more prepared for the challenge and go into it with our eyes wide open, if we do get promoted.

‘Maybe last season we weren’t ready but with the younger players coming through we have a bright future ahead.

‘We have a strong underage structure in place, it’s gathering momentum every year and we have a lot of young guys in the squad at the moment; five of them are involved most weeks with the team.’

Young players like Gavin Shiels, Aidan O’Donoghue, Shane Barry and John O’Donovan have all stepped up to the mark this season, and when you add in Holland, his brother Sean Holland, Ger Harrington, Brendan Cullen and goalkeeper Brendan Hurley, you can appreciate the mix of youth and experience.

Crucial too has been the role of manager Peter Jones, in his first season at the helm of Bandon. He has tightened up their defence, so much so they have conceded just 20 goals in 17 games – the best defensive record in the league.

‘When Peter came in as manager, he got us working hard on the basics in the training, both defending and attacking. We have kept the most clean sheets in the league and we have only conceded two goals at home, which is a great record to have,’ explained Holland, who works as a sports tutor with the Education Training Board in Cork City.

‘Peter brings experience and that winning mentality from all his years in the AUL, and he won numerous leagues and cups with Kinsale, so he is a man who knows what he is talking about.’