Stephen Carey pictured on the 2012 Circuit of Kerry, which was his 50th rally.

IN any sport there are times when talent is simply not enough. Some sports can be more expensive than others and finance is often the determining factor. Motorsport is a case in point. Even to be successful at national level can be financially demanding and, often, true potential is never realised.

Baltimore’s Stephen Carey is just one example. He only started rallying in 2007, has made quite an impact and it’s certainly not over yet. International, national and regional class titles along with a regional championship victory illustrate his genius behind the wheel.

‘I never really meant to get involved in the sport, honestly,’ he said, and, like many more, awareness began at home.

‘I always had a huge interest in it, watching it and my parents taking me to the Fastnet Rally and on a Sunday in March going to the West Cork Rally.’

It wasn’t long before Stephen’s rally horizon broadened and along with his friends he would head off to rallies outside of the Rebel county. The transition from spectator didn’t take long to evolve through his friendship with Joe Crowley.

His first car, a Honda Civic, was self-built from a road car. In August of the same year he made his debut on the Stonethrowers Rally in Clonmel with Skibbereen’s Mark Lee as co-driver. Carey wasn’t alone on the debut front, as Craig Breen also made his rally debut that day.

‘I remember hoping that morning we might survive a few stages before we would inevitably crash,’ he said – and they didn’t crash, but they did finish seventh in the Junior category.’

Unlike other sports, motorsport allows participants the opportunity to compete on the same event as their heroes. Next time out Carey was in elite company. World rally stars Sebastien Loeb, Mikko Hirvonen and Dan Sordo headlined the Cork ‘20’ International Rally with Gareth MacHale, Mark Higgins, Eugene Donnelly and Tim McNulty all part of an ultra-strong supporting cast. Stephen and Mark were seeded at number 29 in the Junior category.

It was a ridiculous time in terms of numbers as over 250 competitors contested the rally, and the Junior category had some 36 seeded entries. Carey finished sixth in the category. That was quite a feat in just his second rally, a sign of things to come. The 2008 season was a year of learning, but it also provided a first class win.

‘I still remember walking into the Deebert House Hotel in Kilmallock that Sunday evening and Rosscarbery’s Jerry O’Mahony was the first person that confirmed we had won our class,’ Carey recalled.

That was only the beginning. In 2009, success came on several fronts. There was a Class 2 victory in the Dunlop National Rally Championship along with accolades in the regional West Coast and Southern 4 Championships and third overall in the Honda Cup.

It was similar in 2010, as Carey won another national class title and the Group N award within the Southern 4.

There were changes by the year end and Carey was in a different car – an EP3 Civic competing in Class 3. It also gave him one of the few disappointing times.

‘We were on the fringes of the top ten in the Fastnet,’ he explained. Seeded at number 45, they were 11th after the opening stage.

‘It was awesome, we led the class by eight minutes but then I made a stupid mistake on the penultimate stage and it was all over,’ he said.

In 2011 the landscape changed as Mark Lee moved on to different pastures and Tragumna’s Breda O’Driscoll joined Stephen as his new co-driver.

‘By then, I was using my own notes, Breda was well capable and we were successful from the very start,’ he said. 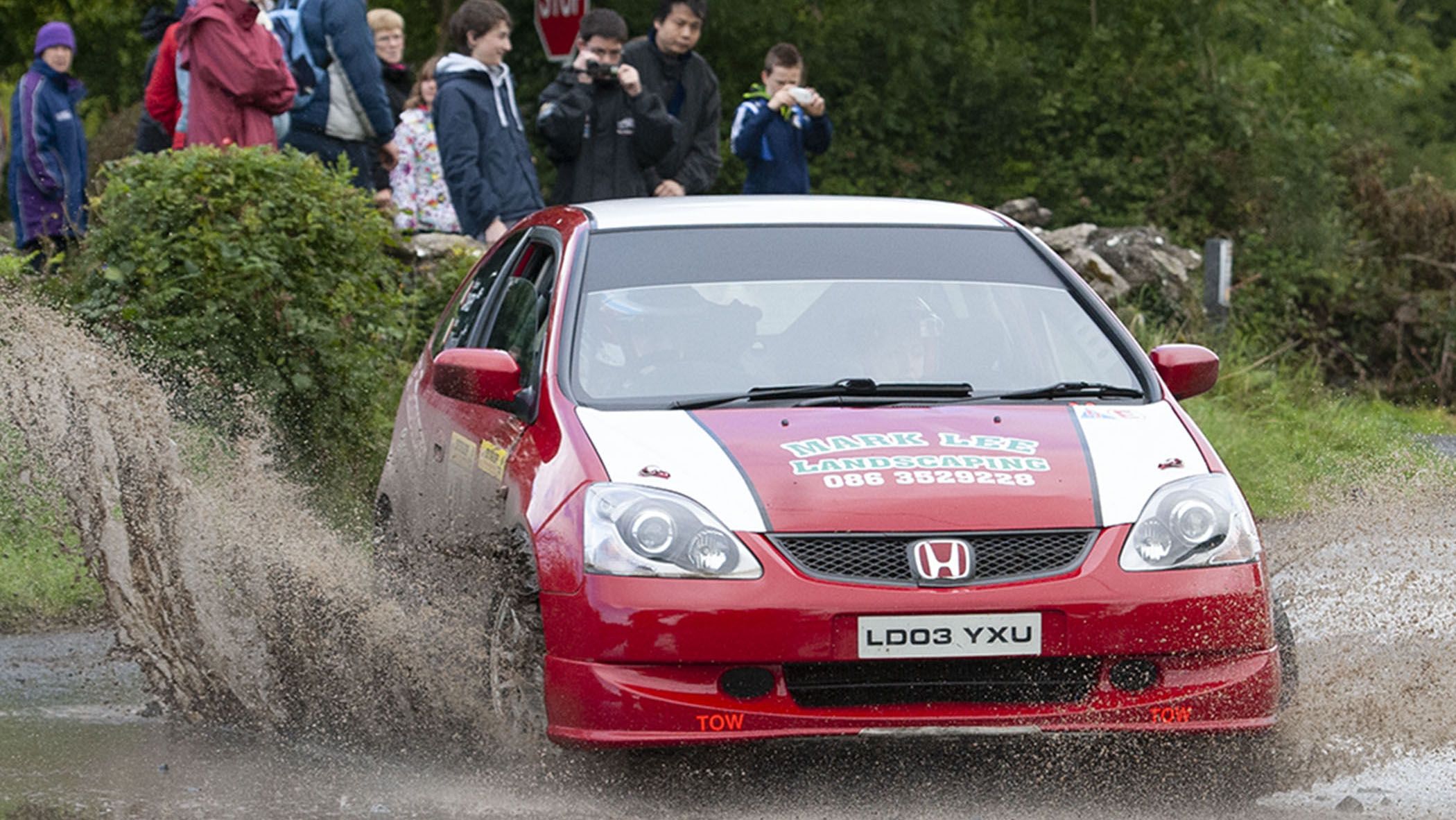 The 2013 and 2014 seasons were laden with success. There were National and Irish Tarmac Championship and West Coast class wins. They just missed out on overall victory in the West Coast series and were third in the Southern 4.

Regularly, they were the best West Cork crew in the West Cork, Rally of the Lakes and Banna Beach Winter Rally. Carey should have been happy but he wasn’t ‘loving’ his rallying.

‘The success was nice, for sure, but I never planned it. I only wanted to drive for fun. We were actually leading the Southern 4 series (in 2013) going to Bantry (Fastnet) but against a WRC Fiesta and a Class 14 Mk. 2 Escort. By comparison, we had nothing, our consistency brought us to this position, not funding,’ Carey explained. The more powerful cars won the day.

‘We finished third overall again and at that moment I had decided not to do much more.’

It was a case of never say never. In 2014 he finished a superb sixth in the West Cork Rally. Other strong results followed on the Rally of the Lakes, Raven’s Rock and the Cork ‘20’ and, somewhat unexpectedly, he won the Southern 4 with a round to spare. One year later, Carey stepped off the rallying stage but not for too long.

‘At the end of 2016, a Fiesta R2 became available – and I couldn't let the chance pass. The car may have come too late but in reality it was not affordable any sooner,’ he said.

Happiness was a state found once more: ‘It was nice because I also got to race again with no pressure.’

Carey reckoned that as he was out of the limelight, he was beneath the radar and under the impression he could motor away quietly.

‘It’s the nicest car I have driven and it is my “last” car.’

He reckons the car has huge potential but he never managed to get enough seat time, it’s also expensive to run.

During that time, Nicole (O’Shea) Roycroft was a returnee co-driver and on other occasions he was co-driven by Ella Ryan and laterally Yvonne Johnston, all from West Cork.

Carey has already achieved quite a lot in Irish rallying, Donegal has been ticked off his bucket list but an FIA Celtic Trophy final in Portugal (2017) was abandoned due to resources.

‘I certainly don’t regret going rallying but I regret not putting more driving effort into it. My cars were prepared meticulously so we were lucky enough reliability wise,’ he explained.

‘I enjoyed setting up a car and chatting between stages. My first concern was always my navigators/co-drivers; they all have parents to be answered if something went wrong. I was always minding the car as well.

‘Ultimately I drove for a bit of fun. I was lucky some success came my way. It was the most enjoyable from when we started in 2007 until maybe 2012 or so, it was simple then.

But it became difficult to keep it all going, you need a lot of backing so you can concentrate on the driving.’

Interestingly, Carey is critical of himself.

‘I don't have that attacking style to be ultimately quick,’ he said, but few people would agree with such an assertion because Stephen Carey remains a class act.