‘HARD work beats talent if talent doesn’t work hard’ – that’s a piece of advice Courcey Rovers and Cork’s Ashling Moloney has adhered to throughout her career.

Camogie players can possess all the skill in the world but it counts for nothing if you are not willing to put in the work. Just ask Courcey Rovers. The Ballinspittle club ended a 21-year wait at senior level for county final glory just last year.

Moloney played a crucial role in that triumph and has since graduated to the Cork intermediate ranks, a team she now captains.

So, where did that hard work mantra emanate from? And how did it help cultivate the skills to become a county-winning player and inter-county captain? The answers lie at home.

The Moloney family homestead is situated in Ballinspittle village and by Ashling’s own tongue-in-cheek admission, on the right side of the border with Kilbrittain.

The current Cork intermediate camogie captain grew up in a busy household that is only a stone’s throw from Courcey Rovers club grounds. It was obvious that camogie was going to play a major role in her life.

The youngest of six children to her mother Imelda and father Raymond, five older brothers and sisters – Shirley, Gary, Rachel, Killian and Gavin – made for a lively household. Everyone played GAA with sister Rachel making her mark at inter-county level with Cork, winning All-Ireland senior medals in 2008 and 2009 plus three All-Stars.

‘Growing up, I would have been Rachel’s little mascot and going around the place with my little Cork camogie jersey with Moloney emblazoned across the back of it,’ Ashling said.

‘Looking back, I idolised Rachel and was lucky that she trained us when I first started playing camogie with Courcey Rovers at the age of six. She would have been my coach all the way up to U16.

‘There are seven years between my brother Gavin and I, the next oldest, so yeah, I was the baby of the family. Shirley was always very good to me growing up too and I had her plus a lot of others minding and looking out for me. Once I was a bit older, certainly when it came to playing camogie at home, there was nothing spared just because I was the smallest! That didn’t matter and if you got a knock, it was a case of you’ll be fine, get over it.’

At club level, Courcey Rovers provided an outlet to display Moloney’s numerous talents before eventually getting the call-up to wear the famous Cork jersey. Once again, a family connection helped her attain underage success.

‘There were only seven girls playing camogie in my class when I was growing up and I’m the only one still playing today,’ Moloney explained.

‘That’s why it was even more impressive that Courceys managed to keep going and remain competitive at the A and B underage grades. I remember qualifying for an U12 final against Blarney, only to lose. Next, we reached the U14 Féile final only to lose again, this time to Inniscarra. The memories of those two defeats have never left me.

‘Courceys did follow that up with a Cork U14B championship, a U16 league and then county minor A championship against Douglas in Carrigaline. What made that extra special is the fact my sister Shirley was training us that year.

‘We had my other sister Rachel in charge of us up to U16 before Shirley took over at minor. Of course, there was a sisterly bond but I was treated no differently than any of the others, something I appreciated. I received the same treatment as everyone else if I wasn’t performing. There was never any preferential treatment.

‘In fairness, I did have have to listen to both Rachel and Shirley all the way home in the car!’ Moloney’s rise to the Cork intermediate starting line-up took the versatile player through the county’s underage ranks. She represented Cork at U14, U16 and minor level but it wasn’t until the Ballinspittle club finally achieved county final glory that Moloney made her intermediate inter-county debut.

Courcey’s recent ascension to the top of the Cork camogie ranks has been rewarded with Linda Collins donning the senior’s armband and now Moloney is wearing the county intermediate’s equivalent.

‘We lost the 2018 senior county final to Inniscarra but I did enough to get called up to the Cork intermediate panels at the beginning of 2019,’ Moloney explained.

‘This is my third season with Cork. I was honoured to become captain in 2021, especially after Courceys won our first senior county. Playing at senior club level was the best possible preparation for that even though that is another step up in quality. Going up against the likes of Rena Buckley, the Mackey’s from Douglas and St Catherine’s Orla Cotter at club level helped prepare me.’

Whatever about attaining success at inter-county level, nothing is ever likely to top the moment Courcey Rovers claimed their first-ever county senior camogie championship in September 2020.

An iconic photograph taken minutes after victory over Inniscarra shows sisters Ashling and Shirley embracing. Taking in the moment their club had finally achieved the ultimate goal was made even more special by having two family members playing such critical roles. Ashling starred at centre-back with Shirley a selector on the management team and creator of some famous Zoom training sessions. 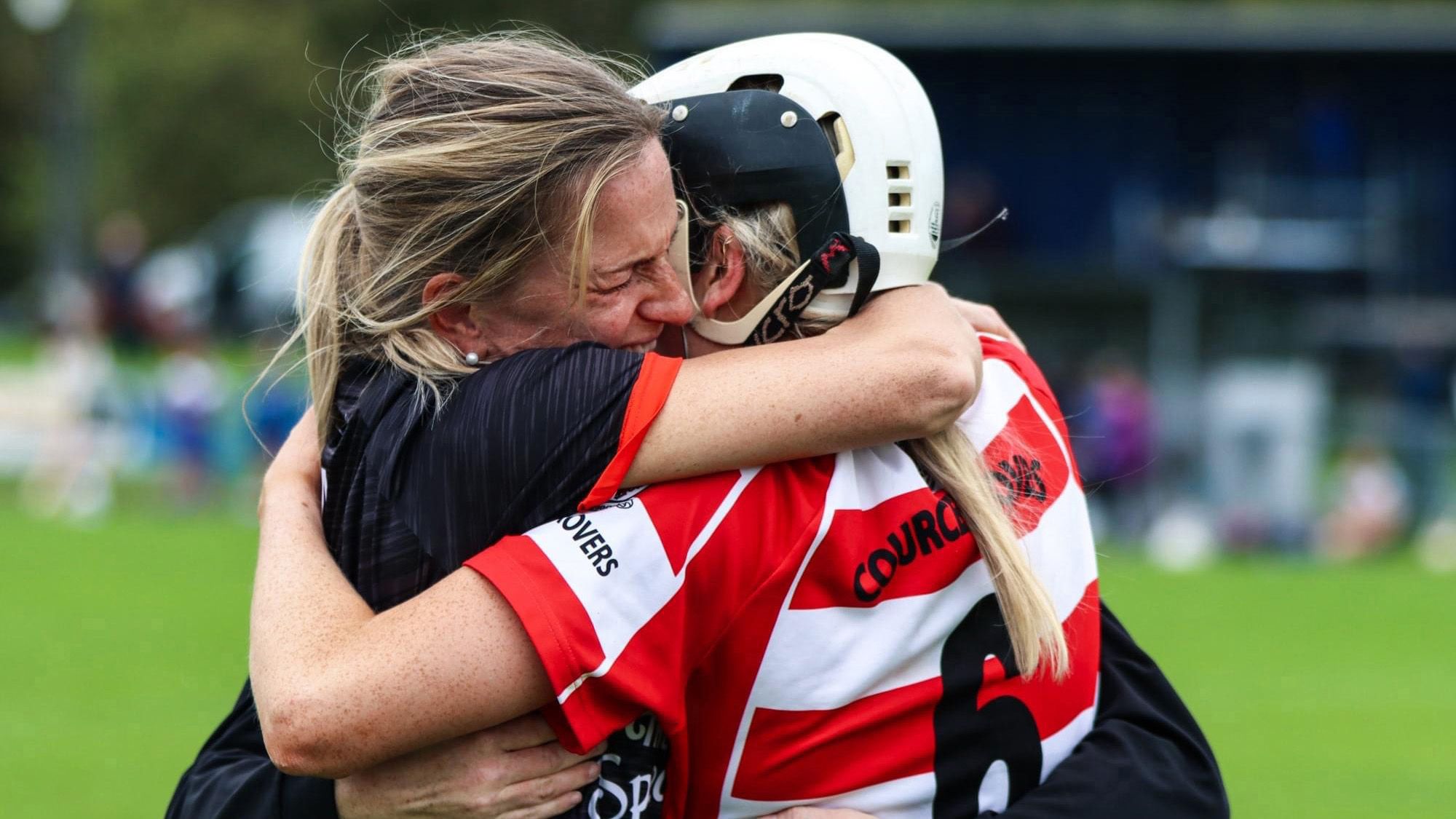 ‘We might have been four goals up heading into the closing minutes but there was still a seed of doubt in my mind as Inniscarra are such a formidable team,’ Moloney admitted.

‘It was sheer elation when the whistle finally went. I remember Shirley running on to the pitch and hugging her with both of us bawling crying. I raced down the opposite end to our goalkeeper Sinead O’Reilly as she was on her own before hugging everyone else in sight!

‘We went up senior in 1999 before finally winning a county. It took us a while but the set-up that our trainer Mike Boland brought in and the expectations he set made the difference. Seeing Mike travel three nights a week from Carrigtwohill for our training sessions showed the girls how much he believed in us.

‘Maybe that self-belief is something we were missing time until Mike came along. His saying that we deserve to dine at the top table resonated with us from day one and look what happened.’

Whatever the reasons, hard work and talent earned Courcey’s county final success, Moloney a senior club medal and place on the Cork intermediate team. The best is yet to come from a natural leader.