A family affair: Pete Hill, owner of Hail Spartacus, winner of the Thomas Harrington Cup, is pictured with his granddaughters Aoibhe and Sarah Kate Cremin, with the Driver of the Day Cup won by their uncle, Patrick Hill, at Gloun. 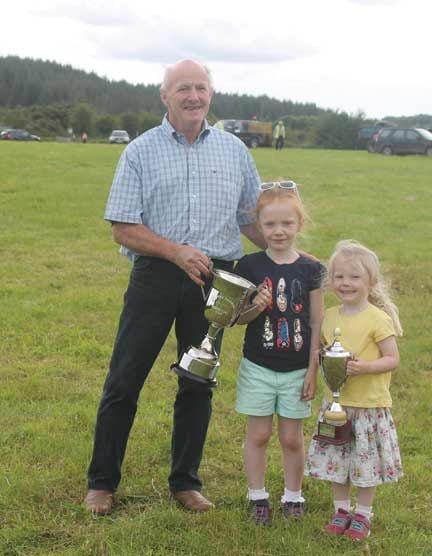 A family affair: Pete Hill, owner of Hail Spartacus, winner of the Thomas Harrington Cup, is pictured with his granddaughters Aoibhe and Sarah Kate Cremin, with the Driver of the Day Cup won by their uncle, Patrick Hill, at Gloun.

HILLSIDE Farms, who operate a breeding facility in Leap, saw two of their home-breds win under glorious sunshine at Gloun harness races on Sunday.

Hail Spartacus took the featured Grade A & B pace, as Patrick Hill eased the winner past Red Mischief inside the last two furlongs to win by a length and a half.

Earlier in the day Hill was seen at his best when guiding Hillside Dartanian to a head victory over Ringo Lady.

Both Hillside Dartanian and Hail Spartacus are out of the regally-bred Meadowbranch Katie, who is a daughter of all-conquering broodmare Churchill Queen.

Hillside Farms is owned by Pete and Mim Hill, who were both on hand to see their offspring win. Patrick Hill also collected the leading driver of the day following his two wins.

Racing opened with another win for veteran driver John Boyle who played a waiting game on Supreme Sunshine, easing this son of Best Sunshine to the front with three furlongs to race and winning by a comfortable six lengths.

Local runner Myross Son got the loudest cheer of the day by the partisan local crowd when edging out Tyson Howard in another photo finish.

The Hitman, a winner in Drimoleague, added another win to his tally, this time by a length under a Kieran Sheehy drive.

Best Talent is another in top form at the moment and Kieran Connolly made his race-winning move with three furlongs to go, going from last to first to beat Oakwood Diamond and the luckless Scorpion.

Volcan Erem heads to Portmarnock this Saturday for the big televised Le Trot meeting at the north county Dublin venue.

Racing returns to Manch Raceway this Sunday with a 2.30pm start time.