This was supposed to be a chat about Dunmanway’s connection to Garryowen GAA Club’s recent success in Melbourne, but the coronavirus was never too far away from the conversation, as KIERAN McCARTHY caught up with Doheny export Alan Sheehan to chat about life in Australia these times

WE tried as much as we could to steer this chat away from Covid-19 – but unfortunately it’s the only show in town right now.

In Melbourne, where Alan Sheehan lives, everyone is talking about the growing threat of the coronavirus. When he rings home to Dunmanway, it’s the main topic of conversation too. No-one can escape its reach.

‘It’s not as bad here yet but the worry is that it will get worse,’ Alan told The Southern Star this week.

‘People are panicking, they’re cleaning out shelves in shops, there are concerns over how it’s going to affect work.’

Alan’s wife, Denise McCarthy from Drimoleague, is a nurse in Melbourne, so he knows how real this threat is.

‘People need to go into isolation, we have to stop the spread and we need to stop it together,’ he said.

Here at home, sport is taking a back seat with mass postponements and cancellations. In Australia, the GAA scene is stopping too. The annual Gosburn tournament in Sydney this Sunday has been cancelled.

But the annual Padraig Pearses 7s Tournament in Melbourne did go ahead recently – and there was success for Alan and the West Cork contingent who line out with Garryowen GAA Club.

‘This is a big sevens competition,’ the 29-year-old Dunmanway man explained.

‘Teams come from all over for it every year, but teams didn’t travel from Singapore this time because of the coronavirus.

‘There are teams from New Zealand, Perth, Brisbane, Sydney, Adelaide, Tasmania, it’s a big competition. This year there were 47 teams between ladies’ football, camogie, hurling and football – and there were senior and intermediate teams in some competitions.’

Garryowen cleaned up. The club won a treble, bringing home the men’s senior and intermediate titles, and the hurling crown. It was a good weekend’s work.

‘Two years ago I was player-manager when we won this,’ Alan explained, ‘and this time it was Mark Quinn who was the player-manager.’

Quinn is another Doheny export in Melbourne, as are Tom and David Collins. Jamie Carroll is another former Doheny with Garryowen, though he missed this competition through injury. That’s a strong Doheny presence, with Alan, Quinn and the Collins’ twins all on the Garryowen men’s team that won the senior competition.

Gary Farrell from Innishannon, also on the Garryowen team, won the Player of the Tournament Award, while former Cork senior Conor Dorman was the winning captain.

There was a West Cork connection to the Garryowen intermediate team that won their competition as Gabriel Rangers’ Eddie Goggin and Caheragh’s Mark O’Driscoll are involved on that team. 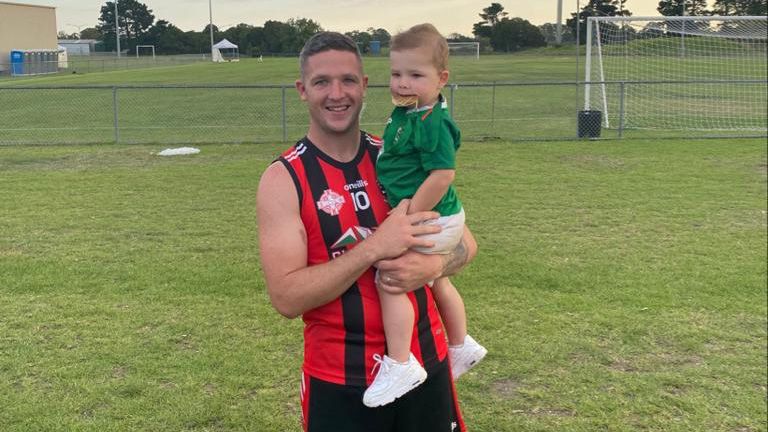 Alan Sheehan didn’t mind taking a step back from his previous role as player-manager this year, as the former Dunmanway Town player is also playing soccer in Melbourne.

‘Over here I play a good standard of soccer and they’re not that keen on you playing football then,’ he explained.

‘I’m involved with a team called Casey Comets and we play in State One, which is a good standard. We’d our first game of the season last weekend, in the cup, and we lost 5-0 – but that was against a side from the National Premier League, which is just under the A League here in Australia.’

Alan added: ‘We can play but it’s behind closed doors at the moment due to the coronavirus.’

And while more and more sports events are cancelled, the Cheltenham Festival wasn’t last week, and Alan watched on with more interest than most – his brother Gavin had a number of rides there.

‘I watched every single race in Cheltenham. It was unreal for Gavin, it’s just a pity that Itchy Feet fell in the Stayers Hurdle, but he didn’t seem to be travelling that well,’ Alan said.

‘It’s when you get a winner at Cheltenham that trainers start taking notice of you. A fella could be winning away all year but a Cheltenham winner gets you noticed.

‘In fairness, Gavin’s after a very good year and I’m delighted for him.’

Alan is living in Australia for the past six years and he loves it there. He owns his own company, SUAS Civil. Denise and Alan have a two-year-old son, Rowan, and another arrival is on the way later this summer. Exciting times in the months ahead.

But for now, and with the Covid-19 pandemic causing world-wide panic, Alan is like everyone else.

‘It’s wait and see what’s going to happen, but there will be knock-on effects to everyone. Here in Melbourne, the Irish Festival at Edinburgh Gardens last Sunday was cancelled,’ he explained.

This was a GAA chat that ventured off in lots of different routes and came back to Covid-19 more than either of the two of us planned, but that’s the new reality we’re faced with in these times.

And the message is the same whether you’re in Dunmanway or Melbourne: stay safe.