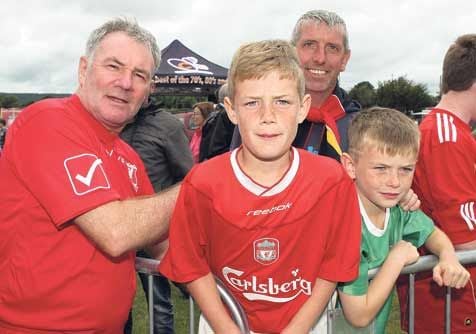 LAST Saturday proved an unforgettable day for the village of Drinagh, its football club and residents.

The visit of a Liverpool Legends’ XI drew close to 2,000 fans of all ages to the Canon Crowley Park ground who enjoyed a superbly-run event and entertaining game between two sides keen to keep the ball on the ground.

An opportunity to see Italia ’90 and USA ’94 heroes such as Ronnie Whelan, Ray Houghton, Jason McAteer and Phil Babb ensured a bumper attendance. The added bonus of John Wark, Gary Gillespie, Alan Kennedy and Jimmy Carter’s presence pleased the large contingent of Irish-based Liverpool supporters who were in good voice throughout.

The hum of chip vans, children’s laughter in the bouncy castles and brass band music provided the perfect backdrop to a family-friendly event that demonstrated West Cork League club Drinagh Rangers’ ability to dream big and deliver an event they should be immensely proud of.

Long before kick-off, the Liverpool players endeared themselves to the locals by taking part in a golf classic and then a road bowling event that saw Jimmy Carter unleash some unorthodox new bowling methods. European Cup winner Alan Kennedy spent a large portion of Saturday morning passing on a wealth of knowledge during a coaching session.

Yet, the manner in which the entire Liverpool travelling party engaged with fans of all ages during the entire weekend they spent in West Cork underlined why they are perfect ambassadors for the Premier League club.

For the organisers, the final whistle brought a long sigh of relief and the satisfaction at knowing nine months of preparation and dedicated volunteer work had been worth the effort.

‘I’m unbelievably proud of the way Drinagh Rangers put together such a fantastic event and everyone who attended seems to have enjoyed themselves,’ Drinagh Rangers’ Don Hurley told The Southern Star.

‘Things worked out really for us – the weather was good, there was a tight game that finished 2-2 plus a great crowd. It is brilliant that half an hour after the game that Canon Crowley Park was still packed with people enjoying themselves and mingling about with the players.

‘Drinagh is not as big as Skibbereen, Clonakilty or Dunmanway so the logistics of bringing a Liverpool Legends’ team over were huge because we don’t have as big a population as those towns behind us to get involved.

‘What happened is that people from Drinagh, the surroundings areas and beyond all chipped in and helped out which made a massive difference. It was a great event which our committee planned by meeting once a week since last November and they did phenomenal work over the past couple of weeks to make sure this event was a success.’

Declan Deasy and David Hall echoed Don Hurley’s sentiments and their Trojan efforts along with fellow volunteers and committee members delivered when it mattered most over the past weekend.

‘As an event, today has been the biggest day in our club’s history, having spent the bones of nine months preparing, organising and working towards delivering something we can all be proud of,’ commented Drinagh’s Declan Deasy.

‘I’m absolutely delighted with all the work that has been put in by so many volunteers and I couldn’t be prouder of my club. The game itself was entertaining too with our own lethal goal poacher Mike Doolan scoring twice. He just never stops scoring.’

David Hall has been one of the main people responsible for famously helping bring a Liverpool XI to Dunmanway back in 2009 and the Republic of Ireland Masters to West Cork 12 months ago.

‘To be honest, I just pointed Drinagh Rangers in the right direction and the incredible local community spirit saw everyone come together and work unbelievably hard to help make the weekend such a special one,’ noted Hall.

‘Today was the culmination of nine months of hard work and effort but it is the Drinagh committee and local area that deserve all the praise.’

Everyone associated with Drinagh Rangers deserve all the plaudits that will come their way for further enhancing West Cork’s growing reputation as a region that can attract cross-channel clubs and deliver successful family-friendly events.