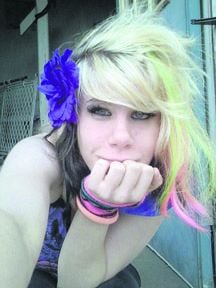 AN American witness has told Graham Dwyer’s murder trial that she formed an online relationship with him when she was feeling depressed and suicidal.

And, giving evidence by video link in the trial of Bandon native Dwyer, who is accused of murdering Elaine O’Hara on August 22 2012, Ms Darci Day told the court that he offered her a solution to her problems. Mr Dwyer’s current address is given as Kerrymount Close, Foxrock, south Dublin. He denies the charge.

‘I told him a lot of stuff going on in my life. I needed someone to talk to. He was there and he listened to me and offered me a solution,’ a very emotional Ms Day told the court by video link from the US.

She said she had been sexually abused as a child and both her parents had their own issues.

She explained that she had had a rough childhood, and added: ‘My parents divorced when I was younger and my dad had relationship issues and alcohol problems. My mum had a boyfriend who had a lot of issues. I struggled a lot with depression.

‘My grandmother was the one woman I really looked up to and I lost her to bone cancer when I was in seventh grade. That was when I became suicidal and mum was going through court battles with my father.

‘I had been sexually abused as a child … I just did not want to live anymore,’ she said. ‘I basically felt like I was worthless to my family. I thought my presence in their life was hindering ... so I struggled a lot with suicide and self harm.’

She said: ‘I just started going online and talking with people who had similar thoughts and fantasies. I did not have the courage to kill myself.’

Ms Day, who is in her early 20s, told the court: ‘A lot of it was just fantasies about myself dying.’

She said she talked a lot to Graham Dwyer through Gmail. She never met him, but emailed him and also occasionally texted him. ‘I unloaded a lot of stuff to him,’ she told the court.

She then said: ‘We just discussed him basically ending my life. We sent videos, lots of stuff, including throat cutting or strangulation videos. I do remember diagrams being sent, diagrams where all the arteries and stuff were on them so he wouldn’t miss.’

She also said Mr Dwyer spoke of his fantasy of coming to Maine and killing her.

She said: ‘He would have me meet him somewhere. From there I would get in the car with him and he would drive me to the location, and then he wanted to have sex and cut my throat until I lost consciousness during intercourse.’

But, she added that she never thought Mr Dwyer would turn his fantasy into reality.

‘I didn’t think he was actually serious,’ she said. ‘If I had any idea he was serious, I would have done something, I would have reported it.’

She said that Mr Dwyer was very respectful about leaving her alone when she ceased contact with him. He had never tried to contact her.

She agreed with Mr Farrell that Mr Dwyer had used his own name with her at all times, confirming that he had used an email address containing ‘gdwyer’.

‘I have been in shock since day one and I’m still reeling. I’m sorry. I don’t know what to say,’ she said. ‘I really tried to move on from it, very hard,’ she continued.

She agreed that she had sent Mr Dwyer pictures of her knife collection, a collection she still maintained and to which she had recently added.

She said it was possible that she had sent him a picture of herself for him to Photoshop, but became upset when asked if it was so he could Photoshop stab wounds onto it.

Mr Farrell then asked about a music video on Facebook recently in which a woman was having sex with a corpse.‘You described it as something hard to look away from,’ noted Mr Farrell.

‘Yeah, it was horrifying’ she said.

She agreed that she had made a video about this court case called Christian Deathcore Powerful Testimony and posted it on the internet.

She also told the court that she was praying for Graham Dwyer and his family.

‘I made that video to give people out there hope and courage,’ she said. ‘I wanted to reach out, I just wanted to tell people from the bottom of my heart that I’m so sorry.’

She also said she had turned her life around since 2011 and added: ‘I ended up giving my life to Christ.’

Earlier, the court heard Elaine O’Hara told a friend she had up to four ‘regulars’ she would have sex with. The court also heard that Ms O’Hara told a friend just eight months before her death that she had miscarried a baby – and the father was a bisexual man called Adam.

The evidence, in a statement by Ms O’Hara’s friend Elaine Twomey, was read into the court.

Ms Twomey also said that her friend enjoyed self-harming. She said that the deceased would have mood swings and become depressed. She said she had once shown her where she had cut her stomach with a knife, describing her friend’s wounds as nicks and not deep.

Ms Twomey said that her friend had suicidal tendencies but never said how she would do it. She said that she didn’t take Ms O’Hara seriously. She believed she was attention-seeking and very immature for her age. Ms Twomey said that Ms O’Hara was sad and disgusted with herself after losing her child.

Ms Twomey said that she had broken off contact with Ms O’Hara in the summer of 2012 after her friend had started to phone and text her constantly.

‘I found it too much,’ she stated. ‘I deleted her number from my mobile phone.’

The court also heard a statement from a David McGovern, who told gardai he used websites Fetlife.com and Alt.com and Friendfinder to meet women for no-strings-attached fun.

When he was told his phone number was on Ms O’Hara’s phone, he said he had used that number on dating websites and this may have been where she got it.

Gardai accessed the records of phones linked to both Graham Dwyer and Elaine O’Hara for the day she disappeared, the trial was told earlier.

The jury also heard evidence from a childhood friend of father of three Mr Dwyer – who related how he, the accused and four others had a get together in July 2011.

Colm Costello, a native of Bandon in Co Cork, told the court that they got together on July 2, 2011. He said he and Mr Graham had known each other since nursery school and had gone to other schools together. He said they lost touch, but rekindled their friendship in 1995 when he went to study in Dublin.

He said: ‘I moved to Dublin in 1995, four years after him and we have been in touch regularly ever since.’ He confirmed that he and the accused and four other childhood friends had a get-together at the accused’s home in Kerrymount Close, Foxrock, south Dublin on July 2, 2011.

They all met up at Mr Dwyer’s home, before heading to the local pub – then returning to the accused’s home.

He said nothing unusual had happened on the evening in question. ‘I hadn’t seen some of the people for a long time. We were planning a 20th anniversary,’ he told the court.

Tracey Burke, from Easytrip, told the court that she dealt with a request from gardai for Mr Dwyer’s toll records and said there was one account associated with him, but that it had three separate tags. She gave gardai account invoices and statements.

Enda Tyrrell, operations manager at a toll booth between junction 8 and 9 on the M4, said he gave gardai a disc of photographs of cars passing through the booth.

‘You probably have hundreds of photographs of me in your database,’ said Judge Tony Hunt.

The jury also heard from Sinead Norman, who owned a 10-acre property in Inverin about 15 miles west of Galway City. She said that, in 2009, she advertised on two websites for the free or cheap assistance of an architect. Graham Dwyer replied to her ad and she met him at her house in Corrandulla, Co Galway.

She said she met him a total of four times. A planning application was made and refused, but she was satisfied with his work and recommended him to a friend, Claire Fox. The court had already heard that toll booth records showed that one of Mr Dwyer’s toll tags passed tolls at Kinnegad and Ballinasloe that day.