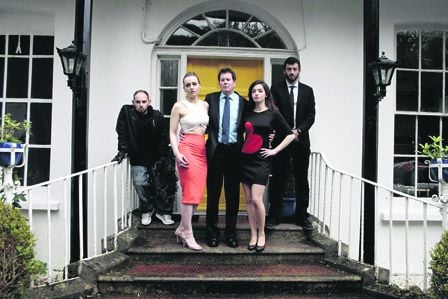 WEST Cork locals are the eal stars of Ireland’s newest comedy movie, which was filmed in Dunmanway, Ballingurteen and Timoleague.

Macra Girl is an independent production, written and directed by Dunmanway native Brendan Hayes. The film tells the story of a young man who joins Macra Na Feirme after the death of his mother, and becomes entangled in a love triangle.

Lead actress, Grace Corrigan from Innishannon, is a Macra member, and won the title of Ms Macra for the Carbery region earlier this year. In fact, over a dozen extras and supporting actors are also Macra Na Feirme members. However, the producers have pointed out that the film is not a Macra Na Feirme project.

Over 50 cast and crew were involved in Macra Girl, all of them voluntary. They were brought together through their Macra involvement, and through filmmakers’ groups on Facebook.

Filming took place between August 19th and 23rd, taking 97 hours to complete, before post-production. It was shot mainly in Dunmanway, although there are scenes in Bandon, Timoleague and Ballingurteen too.

The first showing will be in October for the cast, crew and their families at Tot’s Bar in Kilmeen. Brendan Hayes, who now lives in Bantry and works as a psychiatric nurse, told The Southern Star that they were able to use industry standard equipment and a professional crew, thanks to Brian Stynes, who runs a video production company in Cork. Stynes agreed to work on the project for free after reading the script.

Some of the actors that were brought in have stage and television experience, like Michael Linehan from Cork, a well-known short film maker and Denis Keily, no stranger to TV work.

Tot’s Bar in Kilmeen allowed them to use their bar for filming, and the local gardaí lent them a car to use for one scene.

Calvin Marah, from Cork City, who did some still photography for the film, has described the experience as ‘absolutely fantastic’.

‘We were all strangers at the beginning but we gelled together so well,’ he said.

There is reportedly interest in ‘Macra Girl’ from RTE and according to Calvin, they are also entering it into film festivals.

The crew were quick to thank the local people who accommodated them over the filming period.

‘The people of Dunmanway were fantastic,’ said Calvin. ‘Everybody was really good to us.’