Des has been fully supportive of all Marc’s career choices, and has always encouraged him to get out and experience life.

Behind every great person is someone who is there to help them. This Father’s Day, Niamh Hayes puts the spotlight on the dads of some well-known West Cork faces, who stepped up to the challenge of being their kid’s biggest champion

Skibbereen’s Des Redmond is dad to Marc, a stuntman who has appeared on Game of Thrones, The Last Duel and Vikings to name but a few productions. Although we would consider him to be famous, Des has other ideas!

Marc was showing signs of his future career, even as a young boy.

‘He was always energetic around the garden at home. He started Tae Kwon Do in Ballydehob and then we used to take him to Cork to kickboxing. Although he wasn’t really into that as it was a bit aggressive. That’s why the stunt work is perfect.’

Marc travelled to Hong Kong to be part of the authentic world of martial arts as a young adult, meeting his idol, Jackie Chan, along the way. While many parents may be anxious about their child going away, Des was fully supportive of Marc’s choice.

‘When you live on an island, it’s so important to get off it. Otherwise, you grow up with blinkers on. I did the same myself. You have to get out and experience life and the world,’ says Des.

When it comes to Marc’s stunt work, does Des ever get nervous?

‘No. He’s very professional. If you look at life, you could walk out your gate today and not come home. The same goes for any job that you do. If you know your job, and Marc knows his very well, then it’s not dangerous.’

Travelling the world and knowing your trade are two pieces of advice Des thinks everyone can follow, but any other parenting tips?

‘If you see a talent in your child, you don’t stifle it. Have confidence in them and you never know where they’ll end up,’ concludes Des. 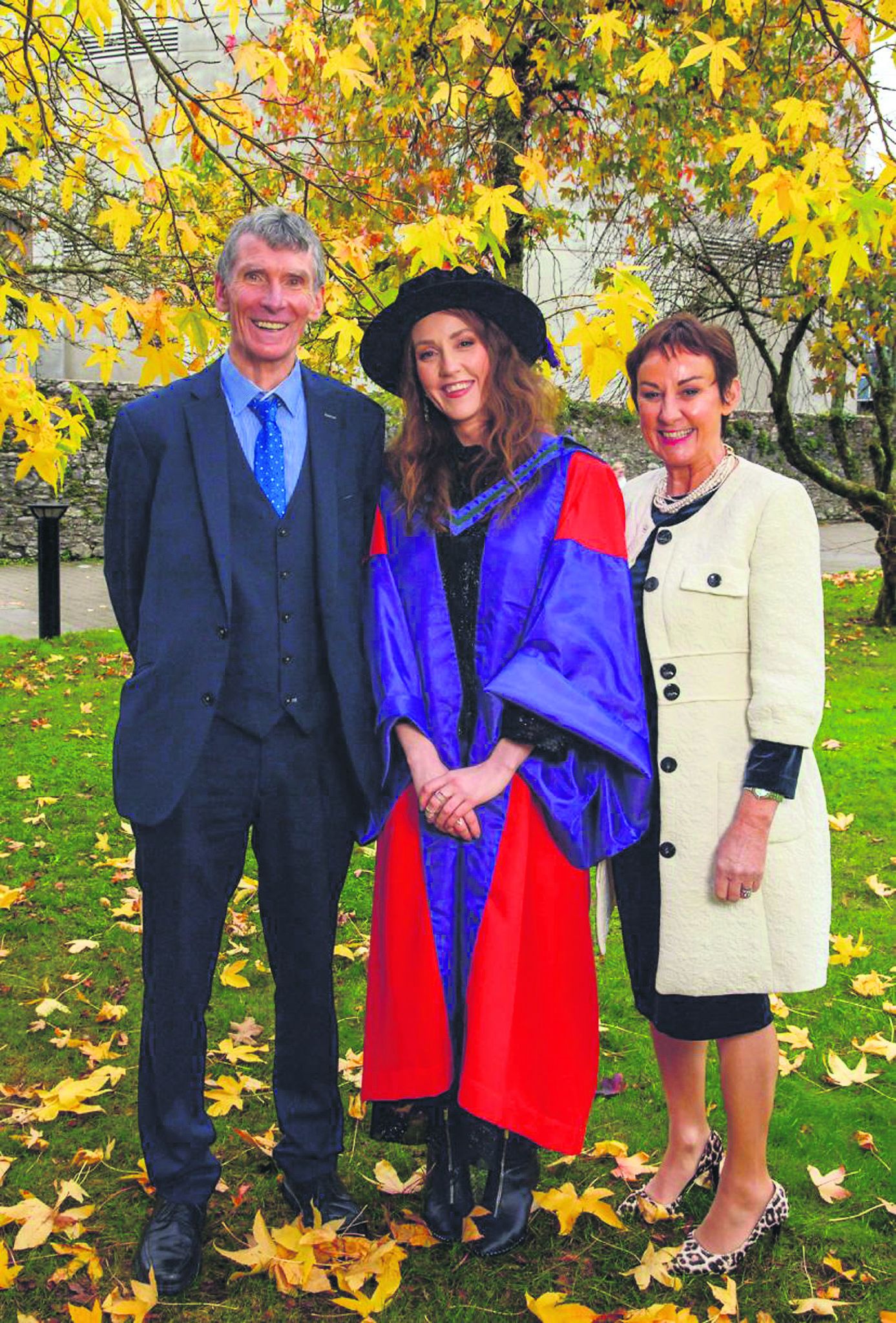 Michael with daughter Louise and wife Marie who he says Louise gets her love of books from.

Michael ‘Haulie’ O’Neill is known for many things; his butcher shop in Clonakilty, MJ O’Neill & Sons, and being manager of Clonakilty senior footballers. But a role that he might be best known for, is being dad to award-winning author and columnist Louise O’Neill, and her sister Michelle.

When asked what Louise was like as a child, the answer is simple and to the point.

‘Louise was dramatic as a child’, says Michael.

So perhaps one would think that it was from Michael that Louise picked up her love of reading and writing, but no, Michael says it was nothing to do with him and more so from his wife.

‘Louise got her love of books from Marie.’

As a true supportive father would do, Michael has read all of Louise’s books, but one sticks out for him.

‘The one I think that asks every one of us how might we react in the situation is Asking For It, be it as a parent, sibling, friend, work colleague. It forces us to question ourselves.’

What has it been like watching Louise excel in her career?

‘To see all Louise’s hard work being rewarded is the most pleasing thing for me. The launch of Louise’s first book in Clon was a very proud evening for all of us,’ adds Michael.

Finally, what advice could Michael give to other parents?

Short and sweet and straight to the point, proving that being dad to an author doesn’t mean you have to be anything but a man of few words. 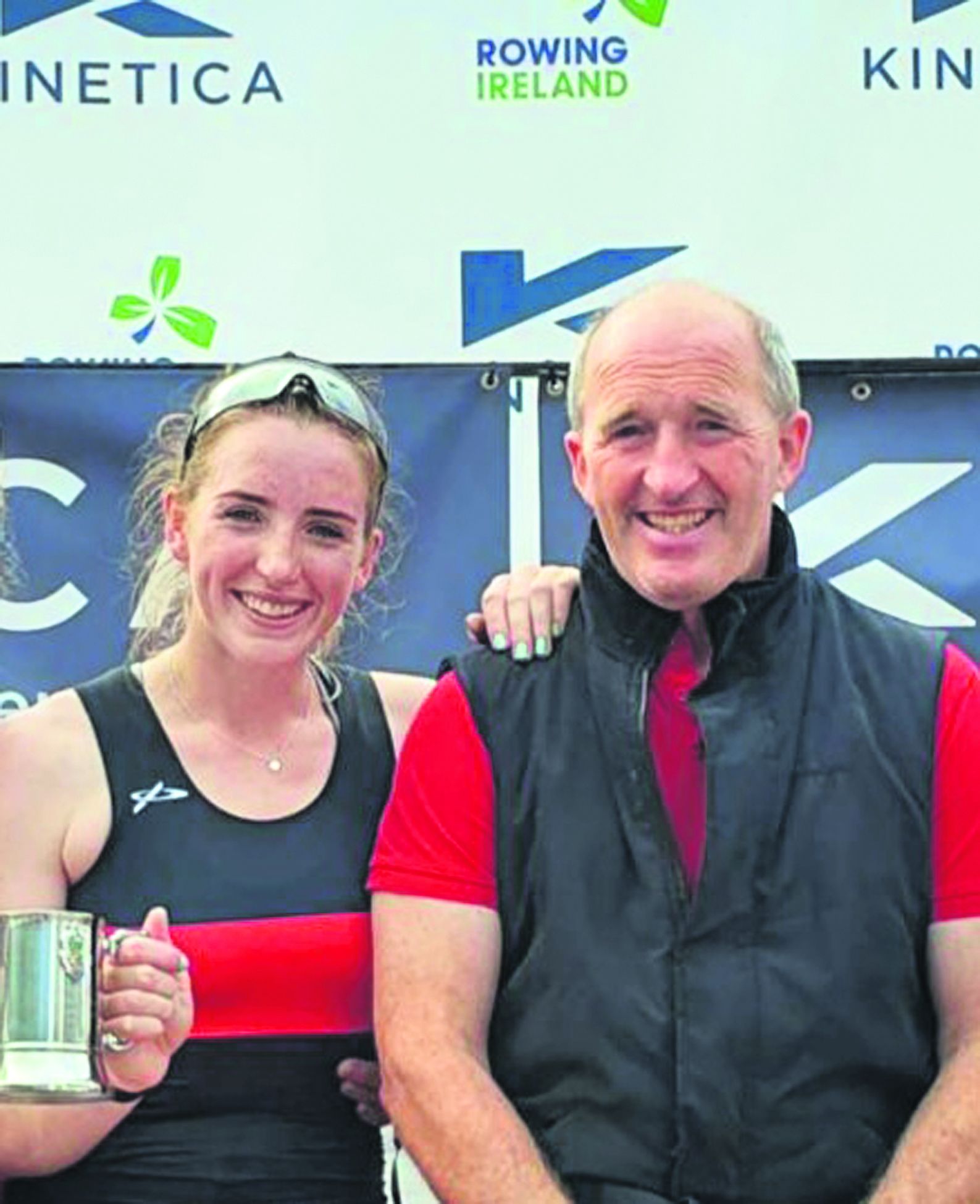 Gerry says it’s important to be there on the good days for Emily, but even more so, when things don’t go well on the water.

Gerry Hegarty is dad to Skibbereen’s Olympic rower Emily. He also has two other kids, Alice and Dermot, but it was Emily who took to the sport.

‘Alice tried out the rowing a little but not in a serious way’, says Gerry.

‘Emily was into Gaelic first but then the rowing took over. It was through a schools programme she got involved first day.’

‘She was real wishy-washy, very skinny, she wouldn’t eat anything but she could drink a gallon of milk a day! To this day she still drinks about three litres every day,’ says a delighted Gerry who is a dairy farmer.

‘If you want to know what drink to give a high-performance athlete, it’s milk!’

Gerry’s first time watching his daughter compete was at an Irish Championships at the National Rowing Centre.

‘It was stressful then and it still is. Actually, it’s even worse now. The day of the Olympics last year was dreadful. I was stressed for the whole day’.

‘It’s more important to be there for them when they don’t do well. It can be a lonely place on the water on your own’.

Over the years, Gerry didn’t have to do too much to help Emily balance everything. She had that down to a fine art herself.

‘She was always very focused, even as a child. She would get up and go rowing for an hour in the mornings before school. Even throughout the Leaving Cert she kept the training up. And now she is still balancing studying and training full-time. She is extremely focused.’

‘We have to pinch ourselves now and again.’

But he has one very important piece of advice when it comes to parenting.

‘Listen to the mothers because they’re the ones that will keep things on track. I usually just leave things flow which might not be the best thing!’ concludes Gerry.