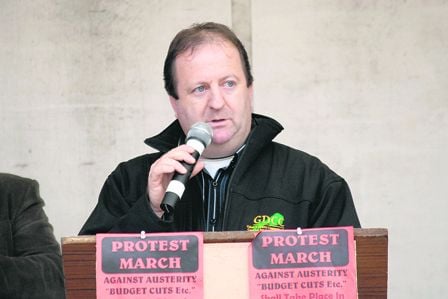 INDEPENDENT Cllr Michael Collins is calling for West Cork to be treated properly in the event of a merger of Cork County and City councils.

Cllr Collins was speaking after discussions about the future of the councils took place behind closed doors at last week’s Cork County Council meeting.

‘I think we need more clarity from the Department before any of this is considered and we have to get guarantees that West Cork will be treated properly and that there is a clear understanding of where we are,’ said Cllr Collins.

‘We can’t leave it where it is now and If we have a merger we could have up to 80 to 90 councillors and how will we able to do business? And where will West Cork stand in all this? We can’t be playing second fiddle.’

Councillors met with the five-person committee, appointed by the Minister, to express their views on the possible proposals for both councils. Some of the options to be considered include the merger of the two councils or the expansion of Cork City Council into other areas, which would extend the city boundary.

‘It’s at a committee stage at the moment and there are a lot of different viewpoints from the 55 councillors but as a public representative of the people of West Cork, we definitely need more clarity. We’re like as if we’re delving in the dark about the whole thing.’

Fianna Fail Cllr Pat Murphy said that the last thing they want is the distribution of revenue to be concentrated more in the metropolitan area rather than county areas like West Cork, and that there should be an equal allocation of revenue.

‘If, for example, they extend the boundary of Cork City Council to areas like Ringaskiddy and Little Island, then Cork County’s ability to raise revenue like rates and Local Property Tax will be reduced financially,’ said Cllr Murphy.

‘It’s all about the brand of Cork County, with all its attributes, and while there is the city aspect, there is also huge rural potential and we have our part to play too.,’ he added.

Recommendations on the proposals to amalgamate or extend the boundaries are expected to be made to Minister Kelly at the end of September.