The eclipse will peak in West Cork after 9.30am 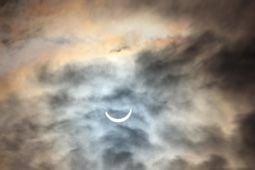 Alan Tobin's photograph of this morning's eclipse, as seen in Skibbereen

SKY watchers in West Cork got spectacular views of this morning's solar eclipse, which began around 9.20am.

Our picture, by Southern Star graphic designer Alan Tobin, shows the eclipse in all its glory, from the West Cork Hotel car park, at 9.25am.

While most of the country was covered in cloud this morning, sections of West Cork had a clear view of the phenomenon.

A public event is also taking place in Cork City at the Blackrock Observatory car park this morning, with the public invited to join in the sky-watching.

BCO astronomers and the Cork Astronomy Club will help you to safely view and learn about the partial solar eclipse.

Taking place from 8:30-10:30am, solar stations have been set up in in the lower carpark.

It is a free open event, no booking required.

As has been well flagged, observers are asked not to look at the sun directly, as this can damage sight.