By Ailin Quinlan IT'S been a roller-coaster few months for the two West Cork actors who play starring roles in the video for Wicklow singer Hozier's hit song 'Take Me To Church'. 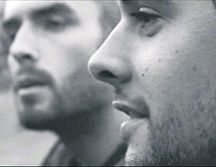 The Hozier video featuring Daniel Coughlan, left, from Fountainstown and Emmet O’Riabhaigh, from Dripsey, has been viewed over 100m times on YouTube.

IT’S been a roller-coaster few months for the two West Cork actors who play starring roles in the video for Wicklow singer Hozier’s hit song ‘Take Me To Church’.

‘I never thought it would become so popular! The result was definitely way beyond anyone’s expectations – a million fold,’ declared Dripsey native Emmet O’ Riabhaigh (26) an actor and freelance graphic designer.

Speaking after Hozier missed out on a Song of the Year Grammy but stole the show with his duet with Annie Lennox, O Riabhaigh’s fellow actor in the video, Daniel Coughlan, (25) from Fountainstown, a student at CIT School of Music declared:

‘The reaction has been crazy! I didn’t see it going all this way – opening newspapers and seeing myself and Emmet having a kiss! It got to a million hits last year and just kept going.’

Daniel said the production costs were modest: ‘The video cost just €1500 to make, and myself and Emmet got €150 each for doing it – and it went stratospheric! My Granny thinks I’m Hozier!

‘The reaction is all over Facebook,’ he says, adding that the video’s strong anti-homophobic message struck a chord with gay communities all over the world.

‘I get loads of messages from Russian and Japanese people, lots of nice message and a few weird ones too! I take all of the work I can get but it remains to be seen what will come out of the video! Some people assume that I’m gay because I’m in the video.’

Coughlan, O’Riabhaigh and another actor from the video, Patrick Skeahan, run a popular sketch comedy group called the Derrynane Robot Club, whose dark comedy gigs have earned the trio a strong following on YouTube.

O’Riabhaigh, too, has received a positive response from the gay community for this work in the video:

‘I got an email from a guy in Japan who is gay and he wrote to me about how he suffered discrimination in Japan and thanked all of us who made the video for highlighting this kind of repression.

‘He was very touched by the video. The video is definitely something I’m very proud to be a part of – it was done in the right way, in the right tone, and the song is amazing. Hozier deserves all the attention he’s getting!’