– Tree down at Rose Hill on the road between Carrigaline and Minane Bridge. Road blocked

– Tree down on the Cloghroe to Ballincollig road, near Muskerry Golf club, road blocked 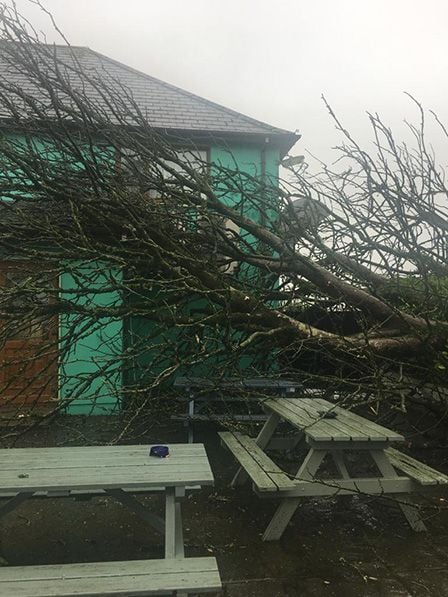 A tree which fell at O'Mahony's bar in Newcestown this morning, but luckily no damage to the building was caused. 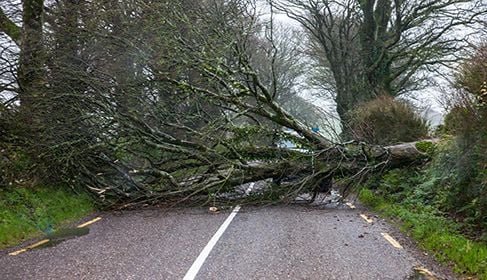 High winds during Storm Diana caused a tree to fall which blocked the road at Agamartha outside Carrigaline, Co. Cork, Ireland. Emergency services were on hand and are trying to get the road open as quickly as possible. (Photo: David Creedon /Anzenberger )

– Road has been cleared at N71 and  Carrigaline/ Myrtleville Rd where trees had fallen earlier.

– Tree down on the road from Coachford village to Srelane Cross and also a tree down blocking the road outside of Kilmurray village.

Gardai are on scene at both incidents. 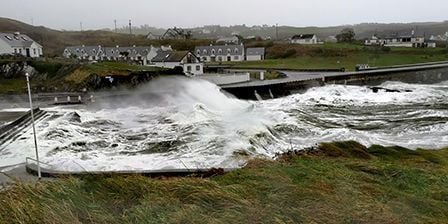 – Met Eireann have extended slightly the orange wind warnings for today.  Continued risk of south to southwest winds of 65 to 80 km/h gusting to 110 to 130 km/h. High Seas also, with a risk of coastal flooding. Cork & Kerry has been put out to 1pm. Wexford, Waterford, Clare & Galway out to 3pm. National yellow wind warning expires at 6pm.

– Reports of a tree down near Thompon's Farm on the road for Fountainstown. Road is impassable and emergency services attending the scene.

– Large tree down on the R612 Carrigaline to Myrtleville road. The road is completely blocked and Gardai and Council staff are attending.

– Reports of a tree down on the Ballea Rd, Carrigaline. Take care on approach.

– Reports of a tree down by Bandon Golf Club and road is closed.

– ESB wires down on the Shannonvale to Ballineen road, near Keohanes Quarry. Gardai are on scene. Some delays possible.

Met Eireann has issued an Orange weather alert ahead of Storm Diana which is likely to effect parts of the south and west of Ireland this weekend.

South to southwest winds of 65 to 80 km/h will gust 110 to 130 km/h while high seas and coastal flooding are also expected.

- ESB are reporting that upto 36 premises in the Bantry area have been affected by the winds. In a statement on Powercheck.ie they say: "We apologise for the loss of supply. We are currently working to repair a fault affecting your premises and will restore power as quickly as possible".

- Up to 58 homes and businesses have also been hit with outages in the Macroom area.

- We have also heard reports of a number of trees down including on the Golf Course Road in Bandon. Drivers have been urged to proceed with caution.

- Reports of wires down on the Shannonvale to Ballineen road, near Keohanes Quarry in Clonakilty. Gardai are on scene with some delays possible.

- Cork County Council has issued a Level Orange severe wind warning for Cork which comes into effect from 6am on Wednesday. The warning will remain in place until 12pm.