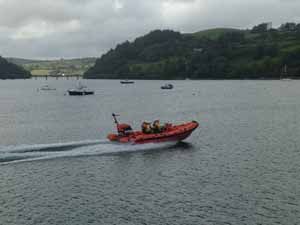 UNION Hall RNLI rescued five men on Friday evening when their yacht got into danger of hitting rocks off the coast of West Cork.

The volunteer lifeboat crew was alerted shortly after 5pm following a report from the Irish Coast Guard that a 54ft French yacht with five men onboard, was dragging an anchor on a lee shore in the inner harbour in Glandore village.

The inshore lifeboat, helmed by Stephen Hurley and with crew members Johnny McKenna and Sean McCarthy on board, launched at 5.15pm and was on scene minutes later.

Weather conditions at the time were described as good with a Force 4-5 westerly wind blowing.

Once on scene, the lifeboat crew observed that the vessel was in danger of hitting rocks after its propeller had got tangled in a rope. The yacht’s crew had put out an anchor, but it then started to drag on a lee shore.

Having assessed the situation, one lifeboat crew member went aboard the yacht before a towline was quickly established to divert the vessel from hitting the rocks.

The lifeboat crew then proceeded to bring the vessel and the five men onboard safely back to Union Hall.

Speaking following the call out, Jim Moloney, Union Hall RNLI deputy launching authority said: ‘The quick response of the lifeboat crew prevented a more serious situation developing this evening and I would like to commend our volunteers for using their skills and training to bring the yacht out of danger. Thankfully, all five men are now safe and well.’