Locals dub Sunday ‘Lycra-Day’ due to West Cork’s great cycle routes. From lengthy Sean Kelly-esque circuits like the Ring of Beara to shorter trails on minor roads, West Cork has a route to suit all abilities and views writes Elaine Desmond

Here are five great cycles to spin your lycra days . . .

Follow the R600 to Timoleague crossing a causeway by the medieval Abbey. Curlews will call as you cycle past the estuary towards Courtmacsherry. Test your gears uphill on to Wood Road beside The Golden Pheasant. At Barry’s Point rest your bike by local man Patrick Keohane’s monument, appropriately weathered, settled into place.

An overlooked explorer, he now looks over Broadstrand. Keohane, a member of Captain Scott’s doomed South Pole expedition, so esteemed by Scott he shared his tent for part of the journey. Luckily not the last part.

Continue on to Seven Heads’ breath-cracking views and across to Dunworley, one of West Cork’s best tucked away beaches.

Feeling like a bike break already? Think mini triathlon, maybe a quick dip here or a great opportunity to add on a walk before looping back up to Lislevane.

Cycle along the Ring road westwards. Returning to Clonakilty you might race against a Galley Head gig training in the Harbour.

Or at low tide, come full circle to curlew call.

One head of Ireland’s holy grail of cycle routes. Either the end or beginning of the double M. Malin to Mizen. It can also be the point of this mid point.

Begin in Bantry, a short hill climb past the cemetery, your back to Ireland’s deepest Bay. If you know it, you’ll hum it.....”And the tender sound of song and merry dancing, stole softly over Bantry Bay.”

Follow the R591 through a valley where sheep won’t bother to raise their heads when you wheel by. In Durrus at the fork in the street, many dither, like choosing between 2 favourite meals.

Even Robert Frost might have blocked traffic, stumped. Today go left, tomorrow return to the road not taken – Sheep’s Head. 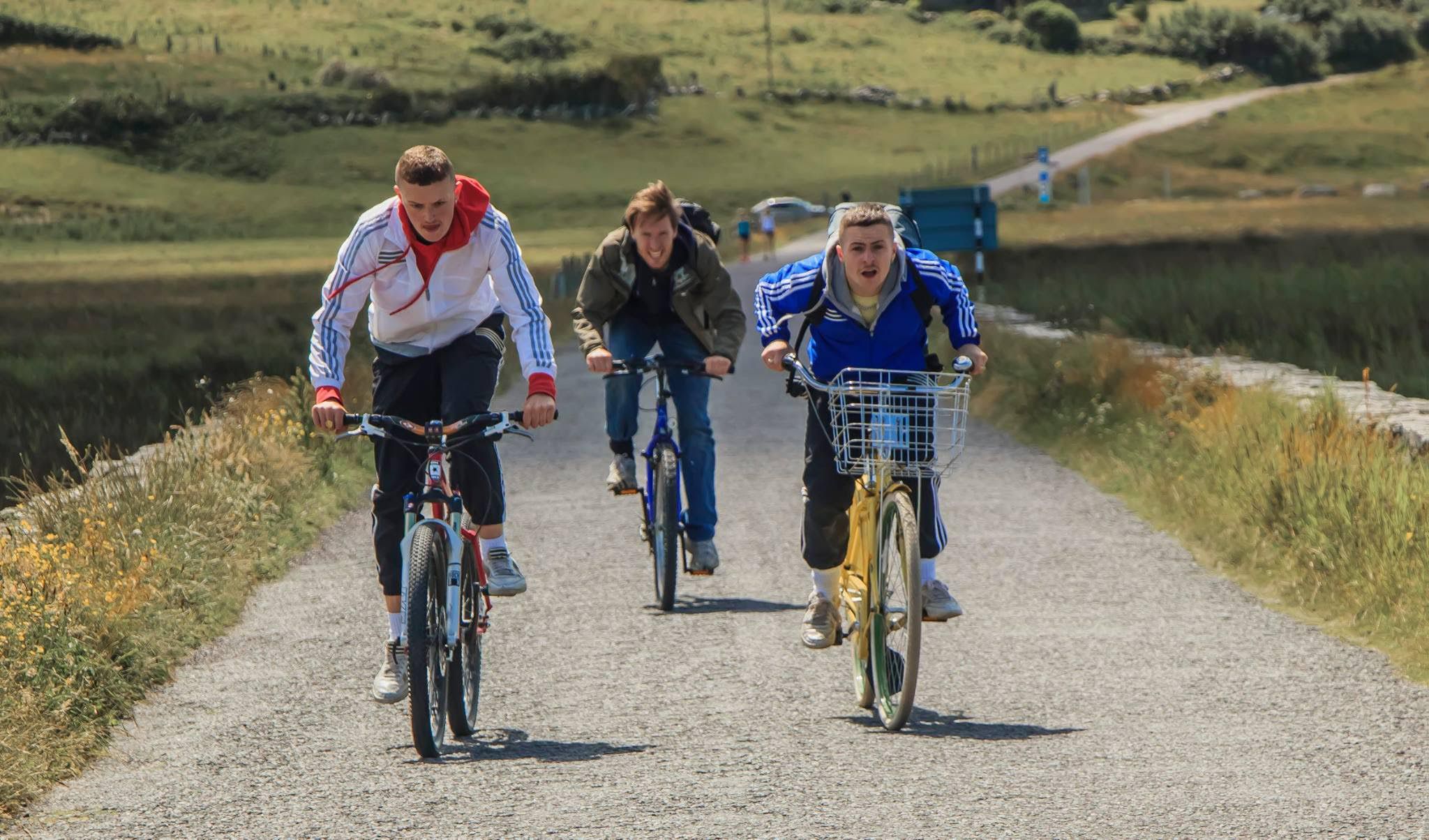 Dunmanus Bay unfurls as you cycle towards Toormore passing the defiant but vulnerable finger of Dunbeacon castle.

Carry on through Goleen, again opting for the left fork. All views from here to The Mizen are expletive-worthy. Your bike may blush.

A swathe of ocean leads you to the first of many Fastnet sightings.

The next 7 km rolls you past glittery Crookhaven harbour, loops over Barley Cove beach, then it’s ‘just’ 3 km.... uphill to The Mizen.

Complete your cycle here with car pick up pre-arranged or loop back to Bantry.

If you choose the latter, cycle directly to Goleen, skipping Barley Cove’s circuit. For diversity and a challenge, instead of returning via Durrus, carry on through Schull then Ballydehob twisting over the steep hills here back to Bantry.

LENGTH/DURATION: 45 kilometres (one way) or 92 kilometres looping via Schull/Ballydehob.

DIFFICULTY: Moderate with hill climbs. The loop includes a challenging climb by Ballydehob.

Tomorrow has arrived. Begin again in Bantry. Soon you’re back at the fork in Durrus, and another great West Cork cycle route.

As you leave the village, sea takes over almost immediately. You are now parallel to the Northside of the Mizen Peninsula.

Just before Ahakista stop for view-soakage and reflection at the Air India memorial site.

A garden and sun dial sculpture commemorates 1985’s Flight 182 disaster when all 329 on board died. The stretch of sea scalloped by hills here might soothe any loved ones who visit. Maybe. 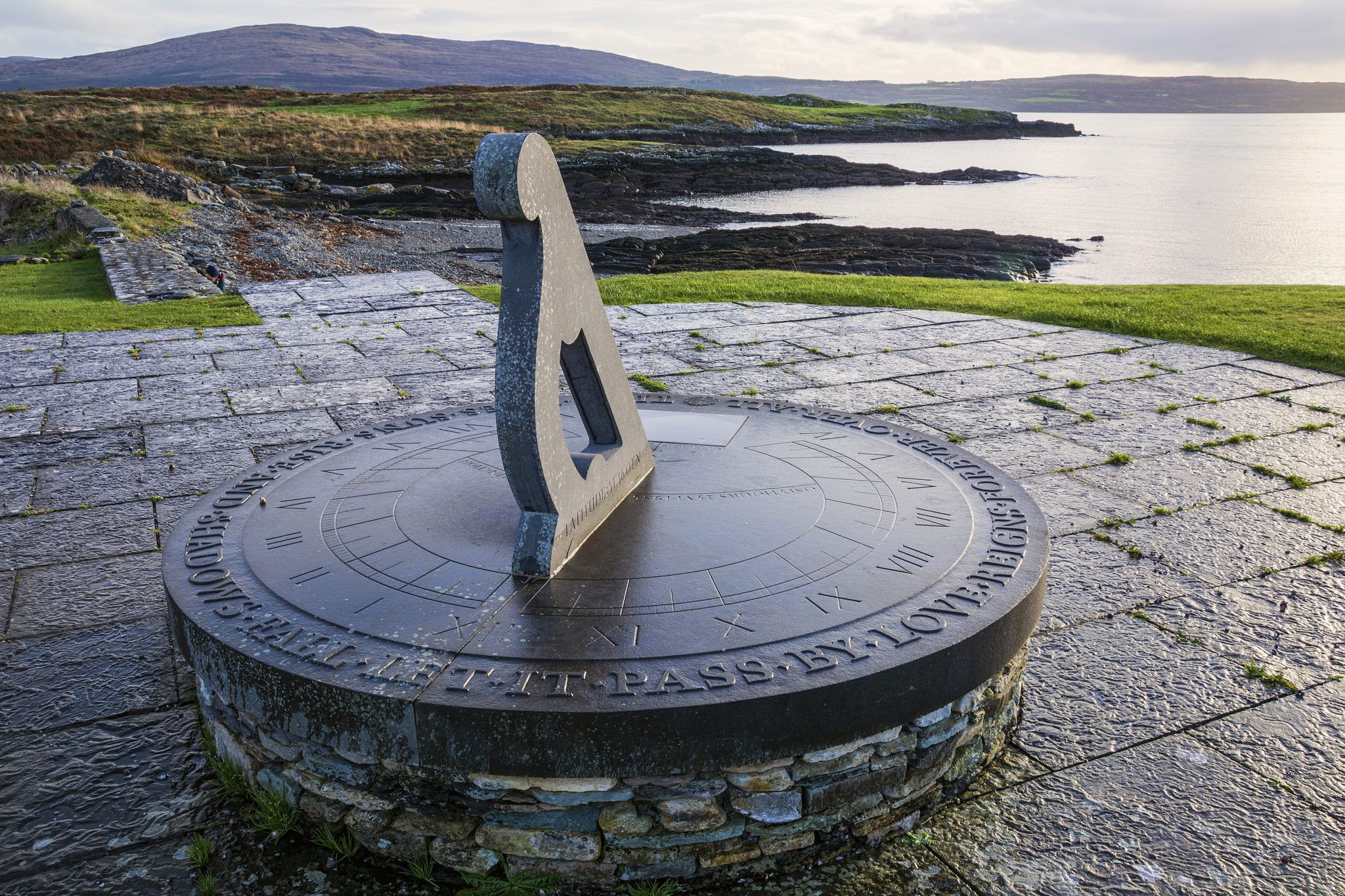 The sculpture in Ahakista that commemorates 1985’s Flight 182 disaster when all 329 on board died.

After Ahakista continue past Kilcrohane where the views widen further and an incline puffs you towards the tip of Sheep’s Head.

Return to Bantry via Kilcrohane and Goat’s Path. This route will spin you back with Bantry Bay and all its depth between Sheep’s Head and Beara Peninsula opposite. And so to Beara. .....

DIFFICULTY: Easy to moderate. Inclines towards Sheep’s Head tip and returning, past Kilcrohane.

Besides Malin to Mizen, the other great Irish cycle route on every cyclist’s tick list . . . the mighty Beara. Grizzly of peninsulas. But depending on how Cork you’re feeling, the Kerry bit isn’t compulsory. Today channel your Roy.

Start in Glengarrif following the R572 to Adrigole and Castletownbere. The latter is one of Ireland’s major fishing ports, trawl past the trawlers at the pier admiring boat names like Prosperity, Sparking Star and Menhadin.

Battle a steep climb after Castletownbere passing the long, flag-fluttered entrance to Dzogchen Beara, a Tibetan Buddhist centre, before rounding the peninsula’s tip with obstacle -free views. All ocean, all sky. 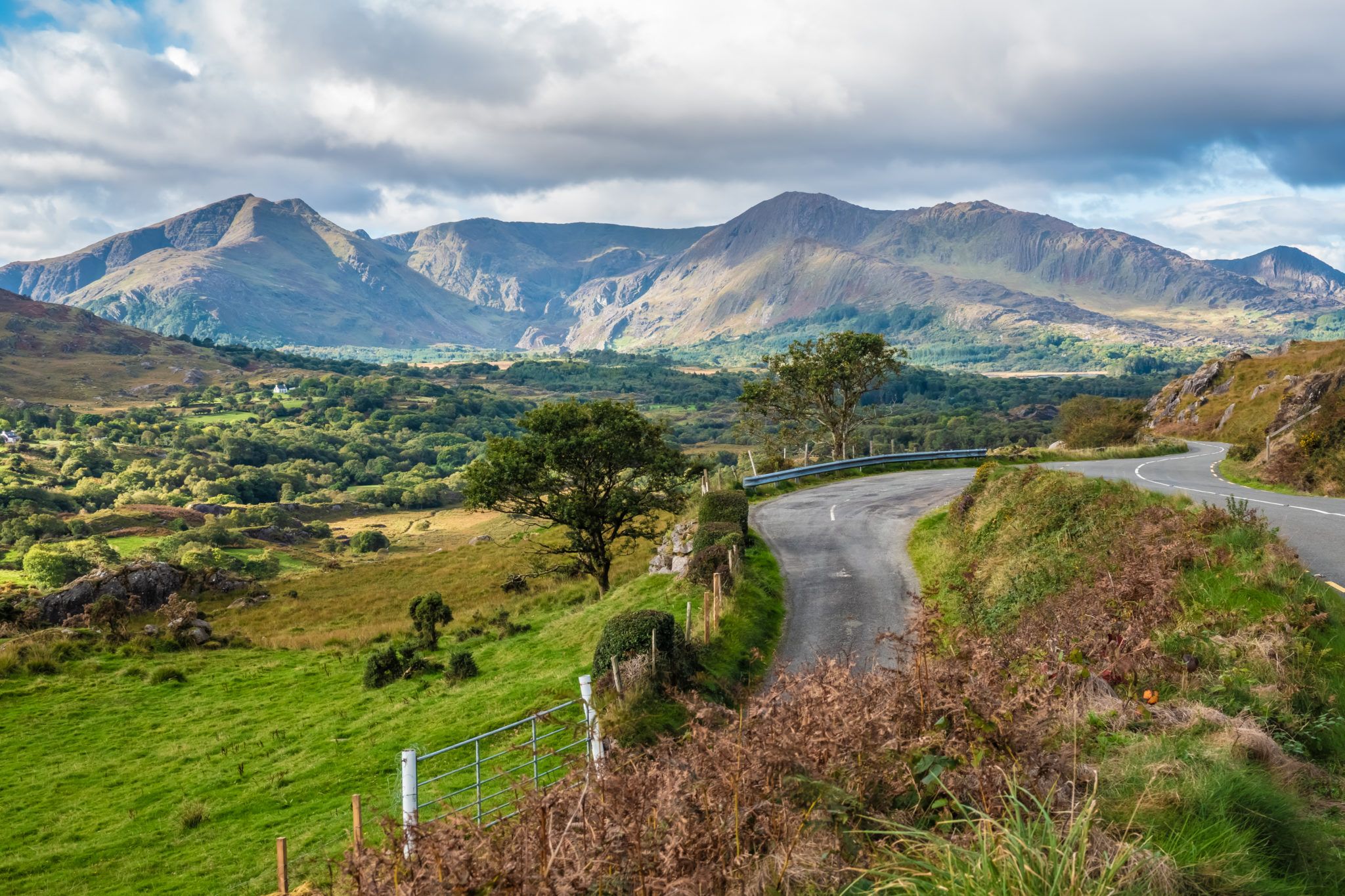 A cyclist's paradise on the Beara Way

Although the approach to multi-coloured Allihies is challenging, Ballydonegan Bay is well worth the extra pedal power.

A mining tower perches above the village, stone upon more stone. T

his area is veined by copper mines  – “Where moss is gold in the copper pools”. Local poet Leanne O’Sullivan’s ‘The Mining Road’, another way to visit the Beara Peninsula.

Pedal on towards Eyeries then loop southwards to Castletownbere. From here it’s familiar territory back through Adrigole and finally Glengarrif.

DIFFICULTY: Moderate to difficult with a number of challenging climbs.

Good things come in small packages.  One of West Cork’s great cycle routes, this circuit compactly includes a little of many great things.

Follow the R595 to Baltimore, cycle past the cove, curling uphill to the end of the road. Your views here are Sherkin Island ahead, the busy Harbour and Ringarogy observing.

Above on the heathered crest Baltimore Beacon lords over all, eyeballing Sherkin lighthouse.

For the extra energetic view your loop from a height and climb Knockomagh Hill. 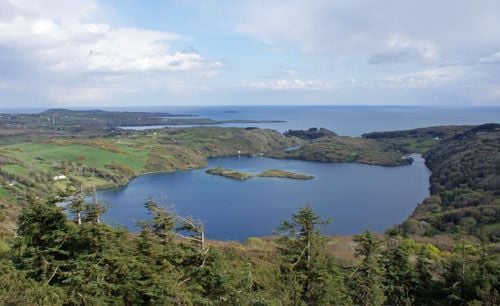 There’s a short incline as your return to Skibbereen (another good thing in a small package) but this soon levels off to flat terrain.

DIFFICULTY: Easy with a couple of slight inclines.