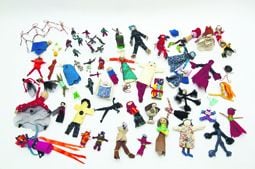 A selection of some of the ‘miniatures’ that will be on display in the island exhibition this summer.(Photo: Robbie Murphy)

SMALL is beautiful, they say. Well, if that’s the case, a new exhibition coming to the islands of West Cork this summer will delight one and all.

West Cork Arts Centre presents the ‘Museum of Miniature: The Islands’, a portable museum curated by artists Marie Brett and Tess Leak, which is heading for the West Cork Islands of Sherkin, Heir and Bere.

This ‘pop-up and wondrous’ museum of tiny artworks that ‘fit in the palm of your hand’ includes work from artists based on Irish offshore islands, plus those on European and international islands, including Fejoe (Denmark) Saltspring (Canada) Fogo (Newfoundland) and Honolulu (Hawaii). The project follows on from the huge success of a similar exhibition in 2012 that took place during Skibbereen Arts Festival and included work from 142 international artists.

The communities on Sherkin, Heir and Bere have also worked with artist Tess Leak to create populations of miniature figures at the heart of this year’s Museum.

Artist Marie Brett said she was delighted to be curating the Museum of Miniature with fellow artist Tess. ‘It is exciting to see new artwork being made and to plan the touring exhibition that will hop from island to island over the summer months,’ she said.