Oh it was all fun and games with Siobhán at Duran Duran, but just over a day later she tested positive for Covid-19.

A day after returning from a trip to the capital, editor Siobhán Cronin tested positive for Covid-19, leading her to believe she might not have super-human blood after all!

MORE than two years on from the first week of our Covid stories in The Southern Star, I must admit that I was beginning to feel invincible.

I hadn’t contracted the virus, despite having had it in our own house at Christmas, and having had close brushes with many others in my circle over the past 26 months.

I had a theory that my slightly unusual blood type – O negative – was a contributory factor and I had decided, sans any confirmation from the likes of Prof Luke or Dr Tony mind you, that blood types were the deciding factor in who would get The Thing and who would, miraculously, escape it. And, to add weight to my theory, I had even found a few scientific studies online that suggested that type O was less susceptible to the virus than A or B, reinforcing my belief in my superior strength to beat if off.

Three weekends ago, as I made my first return to Dublin since the week before the first lockdown in March 2020, I felt no fear for my return to the metropolis.

My ‘super blood’ would protect me, I believed – combined with my vaccine and booster, of course.

The long-awaited Duran Duran concert, which had been postponed twice already, was finally slated for the Sunday night in St Anne’s Park in Raheny, and I was done with waiting to see the heartthrobs of my teens up close and personal, for the first time in years. 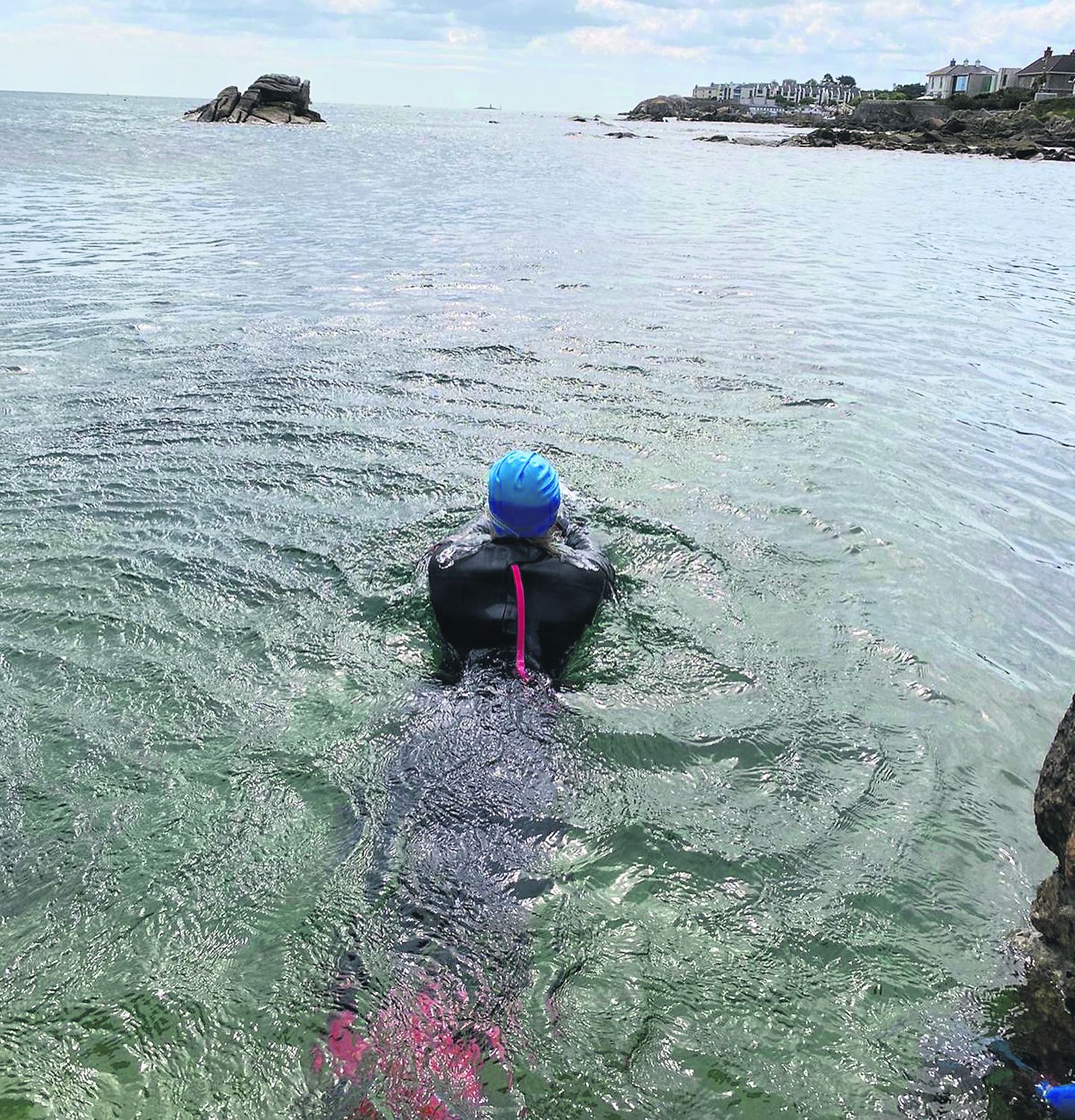 Siobhan having a swim at the 40ft in Dublin.

In all the thousands who attended, I did not see one person wearing a mask, and yet the well-organised gig meant that there were very small queues for the toilets and bar, and we could space out quite safely in the large grassy area in front of the stage, so no panic really.

But leaving the gig was a different story. We all seemed to be corralled towards the one exit gate and there was a bit of pushing and shoving as a lot of nervous people experienced some very unexpected close proximity contact, which was a pity, given the great organisation up to that point.

The last Dart home was pretty full, too, and again masks were practically non-existent. And, with the great joined-up public transport system we have in this country, the last Luas home had left St Stephen’s Green  before the Dart got into town, so taxis were the only option for the final leg of the journey to the southside.

Still, it all seemed worthwhile. I had dined with relations earlier in the weekend, and even included a little dip in the Forty Foot to complete the triumvirate of capital experiences.

On the Monday, before I left for the ‘real’ capital, my sister in Dublin said she had tested positive after feeling pretty ropey for two days. On my drive home the headaches began. By the time I got back to West Cork, I had a throbbing in my head and my throat felt like sandpaper. I was hoping it was all a delayed reaction to shouting along to Simon and the boys for two hours.

But the next day the fun began. By lunchtime I had tested positive and was confined to my room by a husband who was intent on not getting my ‘pox’. Though I thought that horse had well and truly bolted, he bizarrely never picked it up.

But the following seven days were a nightmare. The brain fog they tell you about is a real thing – despite working from the bedroom (wfb), I have no memory of those few days. My only ability to recall the sheer haze of it all is in the text messages and updates I gave friends and family. Of course, I had to check in with everyone I had spent time with that weekend, and thankfully, nobody seemed to have contracted it from me. 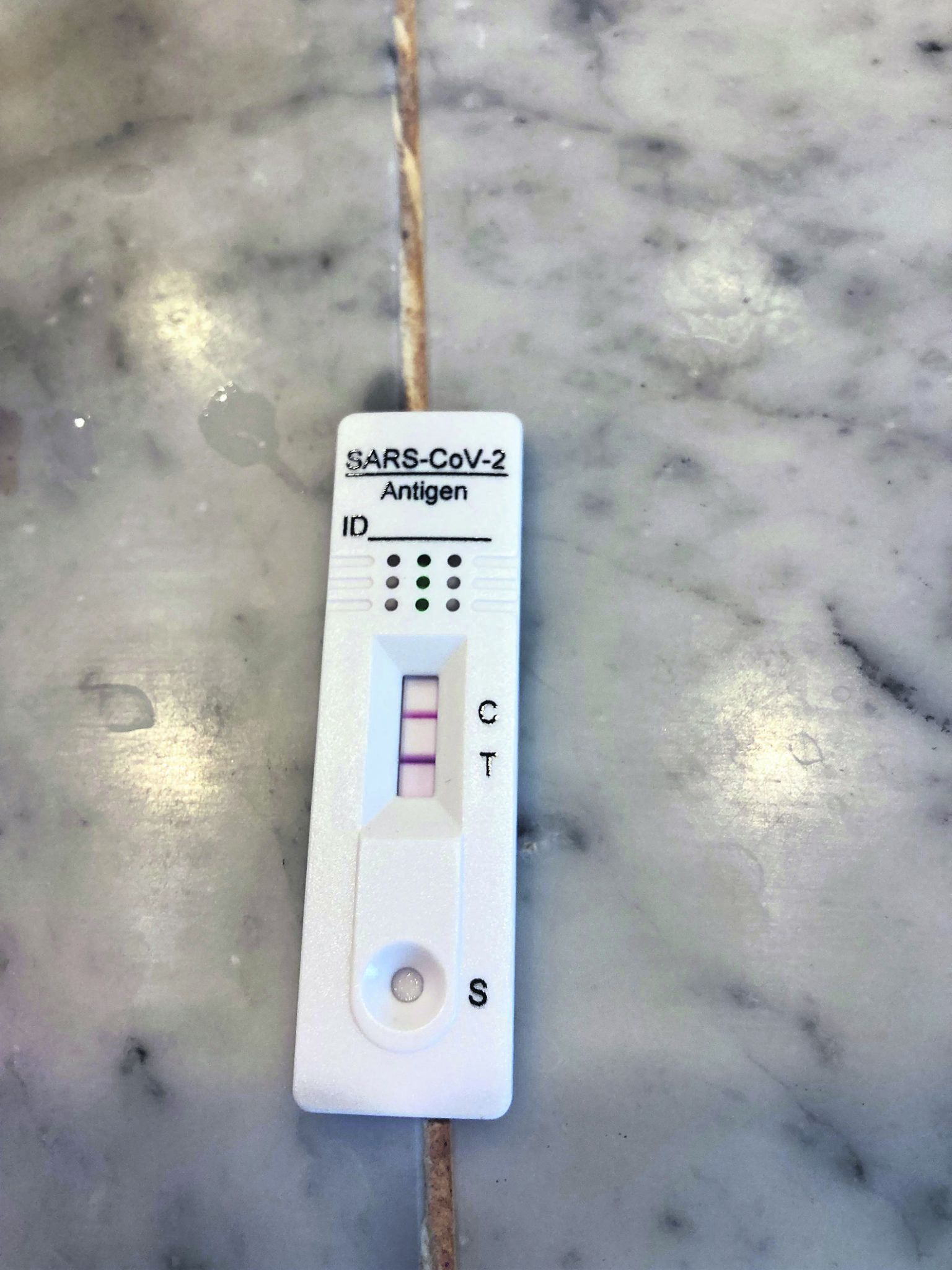 There was no denying that red line on the Antigen test, which remained the very same for six long days.

My meals were left at the door of the room, but for over a week, everything tasted of salt. I felt like a human salt detection laboratory – I was shocked at the salty content of some items of seemingly ‘healthy’ food options, and just couldn’t bear them after a while. I resorted to requesting very plain foods to keep the salt levels at bay – even an undoctored baked potato seemed doused in the stuff! Tea tasted like warm muddy water, and water tasted like nothing at all.

I was really beginning to lose faith when, on day seven, my previously dark red line had faded somewhat, and a day later, it had disappeared entirely.

But the most shocking bit about this nasty little devil is that has lingered on well beyond Week 2, and I am still coughing and spluttering and fielding dull headaches every few hours. My energy levels have collapsed and I have fallen asleep in the middle of such previous must-sees as Stranger Things and Better Call Saul, much to my utter disgust.  I was always the woman who sat up past midnight to watch ‘just one more’ episode of the latest Netflix series. And I’d be up again at 6.30am for a swim or a dance class.

These days I am happy just to make it past Nationwide without slumping into a dishevelled mess on the sofa.

I still have no real idea where I picked up the little spiky protein but I just hope I see an end to the after-effects pretty soon.

All I can say is that these days, it’s a lot less Wild Boys, and a lot more Is there something I should know?