A Cumann na mBan brooch, similar to the one Hannah would have had

The courage and capacity of Cumann na mBan during the War of Independence has long been undervalued. At the Cumann na mBan Convention held in October 1921 its president, Countess Markievicz, told the delegates how proud she was ‘of the girls who stood in the gap of danger during the time of stress and war last winter’.

Members of the Republican women’s organisation had been active on the front lines as dispatch carriers, arms smugglers, scouts, intelligence agents and in the provision of food, shelter and care for the IRA. There was ‘a generous chorus of praise,’ said Markievicz, ‘for their courage, their capacity, and above all, their discretion … The men in the country tell me that they never could have carried on without the help of Cumann na mBan".

In fighting areas such as West Cork where Cumann na mBan was particularly well-organised, the members worked in direct contact with the Flying Columns, providing shelter, catering, carrying messages and hiding arms, but in general the Branches devoted themselves to whatever activity seemed most suitable to the needs of the particular area in which they were situated. S

trict supervision or control from HQ was impossible. Over the last few months, several other important milestones in the history of the War of Independence in Ireland have just passed. Therefore, it is important that we remember all the wonderful women who, with courage and bravery, worked together for a united cause.

One such woman was Hannah Barrett of Ballynascubbig, Ballinspittle who listened to her dreams, not her fears, and was admired for her courage and bravery. Hannah was born on the 14th of July 1897. She was the younger sister of First Lieutenant James Barrett of 1st Battalion, 3rd Cork Brigade and the older sister of Volunteer John Barrett.

Hannah joined the Kilbrittain branch of Cumann na mBan in 1917 and was engaged in routine activities. She had two brothers who were involved in the

1916 Easter Rising in Macroom, one of whom, James, became First Lieutenant in the local company. Hannah’s home was a refuge for many Volunteers during the entire period. While James was

a Lieutenant, Hannah would have six men come to the house for food each night for about a month. These included brothers Thomas and Sean Hales,

Dan Holland of Timoleague and Con O’Donoghue of Ballinadee. During this period, she served an average of thirty meals per week because during the German Plot scare, fourteen men came for meals each week for three months. She gave them breakfast and tea. The house was a four roomed one and the men slept on the floor. 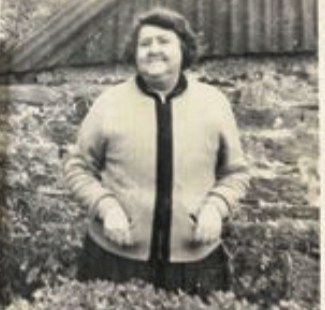 Often times Hannah and her family catered for these men out of their own funds, like many other committed families did at that time. In the area, there was apparently very little organisation of the Cumann na mBan as regards to attending classes, first aid or otherwise.

However, Hannah had some nursing experience as she had acted as a nurse for Dr. Whelply of Bandon while her brother was laid up with blood poisoning during a period of six weeks. Men from Hales’ Column came to the house after the attack on Bandon, two attacks on Kilbrittain and a fight in Newcestown.

About 30 men came each time and Hannah would provide food and beds for them. Many men “on the run” would often come to Barrett’s where they would be given food and a place to rest.

Amongst the men “on the run” who came and spent a day and night were John “Dorgan” Barrett, Clonbogue, Michael Herlihy, James Crowley, Con and Michael Crowley, Jackie O’Neill, Davy and Paddy Sullivan. She did some washing for the Column and for the men “on the run”. The meals served by her during this period averaged 70 per week.

While the Column of about 70 men were in the camp at Barrett’s, Clonbogue, she helped in cooking, baking and the washing of the delph necessitated by their presence, in the house of Lena Barrett and other neighbouring houses.

Lena Barrett (whose three brothers were Volunteers) assisted with the cooking and baking etc. While some of the men slept in adjoining houses, they all came for their meals back to Lena Barrett’s.

Hannah stayed in Barrett’s for a week. She took watch in the roof of the house through a skylight one night while the men were preparing plans. She worked very hard during the week, day and night.

Hannah would carry verbal dispatches on average of one per week. These were in the nature of warnings to Battalion Headquarters, a 4 mile distance. She took a dispatch from Timothy Crowley, Kilaneetig, Ballinadee, to Dick Barrett at Crossbarry, a distance of 15 miles, about a month before the ambush, using a horse and trap. On another occasion she walked 4 miles to Fitzgerald’s Headquarters, Clashreagh, Kilbrittain with a dispatch from Crowley. She also frequently took dispatches

to Ballinspittle. While the Column and men “on the run” were at their meals or when ordered to do so, she scouted and watched for enemy movements. Once, while Sean Hales and his Column were

in the house, she warned them of the approach of the military and they got away. On another occasion, while John “Dorgan” Barrett who was in the house on volunteer business, possibly to see her brothers, the house was surrounded and she saved him by a ruse by painting his neck with iodine and putting him

to bed. She pretended he was dying. Column men and others, when leaving the house, took their arms with them. Prior to a raid by Military, whose presence she detected, she saved some ammunition left by her brother in the house by depositing it in a ditch a few fields away until the raid was over.

She never had occasion to attend any ambush or intended ambush for first aid purposes. The only time where she had to exercise first aid was when her James, after receiving a bullet wound to the hand, came to the house.

She saved his life by keeping pressures on the wound which bled copiously for three hours before the arrival of Dr. O’Leary. She also tried to restrict the flow of blood by binding his arm in two places but this was ineffective and she had to resort to the pressure tactic method.

The brother was kept three days in the house and then she accompanied him through Kinsale to hospital.

Hannah helped in the removal of the four volunteers who had lost their lives. She helped lay them out and wash them and was asked to stay overnight in Crowley’s. The next morning, she helped in the escape of the Battalion Adjutant, who was armed. She was also in the house the day of the funerals.

Hannah stated to the pension officer that “in this service I gave the precious years of youth”. Many of the women

who were in Cumann na mBan remained silent about their roles; they sought

no praise for doing their duty. The combining of the many sources and resources we now have access to, can give us an understanding of the participation of Cumann na mBan women in the decade 1914-1923.

The bravery and resourcefulness of Hannah Barrett and her fellow members of Cumann Na mBan should be cherished in our hearts forever.