FILLING the editorial chair of The Southern Star occupied for half a century by the legend that was Liam O’Regan must have indeed been a daunting task for Con Downing in 2009, but no one was more capable or worthy.

Con has always had a passionate and active interest in music and entertainment and it was in the late 1970s, when as a young reporter covering mid and south Cork that we first met in Kinsale where at the time, he was town clerk of the local urban district council.

It was from his flat in the town that we collaborated on a feature for the Star on the Macroom Mountain Dew Festival.

Con was PR for the festival that was to draw top acts and huge crowds to the Muskerry capital, most notably Rory Gallagher.

It was around this time also that Liam O’Regan assigned Con as compiler of the ‘Showbiz’ pages in the newspaper, which proved hugely popular and generated significant regular advertising.

Many a band and performer got their first break in the world of entertainment, courtesy of free publicity through his column which week in, week out, gave readers a comprehensive round-up of the music scene in Co Cork and beyond, with information on upcoming, gigs plus updates on the movie scene and his ‘bits and pieces’ paragraph.

On occasions when Liam was away on vacation, I had the onerous task of deputising as editor of the paper and would invariably, with an hour or so before going to press, get a call from the motor tax or other Cork County Council offices. From there, Con went on to serve an update or correction to the column, such was his dedication to accuracy for his many readers.

Con’s greatest achievement, I contend, was The Southern Star Showbiz Awards in 1985.  It was to be the first of several memorable annual gala nights at packed venues in the city and county attended by several of the leading stars of the Irish entertainment world. Readers, by vote, decided who would be presented with a cherished framed Skibbereen Eagle Showbiz accolade.

Con joined The Southern Star as its assistant editor in 1990 and actually compiled the first tabloid edition of the paper devoted to East Cork, plus several historical, festival, farming and other special Star supplements after that.He was a judge for many years of the monthly Celtic Ross Hotel Cork Sports Awards and in his leisure time, became a valued member of Skibbereen Welcome Home Week Festival and the local drama group.

He went on to become editor in 2009. However, it’s worth pointing out that during Liam’s protracted illness the previous year, he played a Herculean role working very long hours (including during a heat wave) ensuring publication of Cork’s leading weekly newspaper.

The gargantuan and incessant amount of news and page planning, headlines, caption writing, subbing of articles and numerous phone calls (quite apart from writing editorials and assigning reporters to different markings) that Con had to deal with is quite astounding. How he did this so successfully is equally baffling, but Con has always possessed a cool temperament, a good listening ear and an easygoing nature making him the perfect work colleague, but most importantly of all perhaps, he also possessed a devilish wit and great sense of humour.

So, hears to you, Con. Covid permitting, enjoy your Munster rugby, trips to Stamford Bridge and a swim at your time of choosing in Lough Hyne, followed by a pint … or two. Cheers! 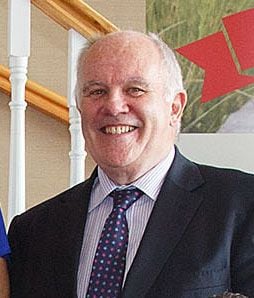 AFTER 45 years of my working life, I am calling it a day this week and retiring as editor of The Southern Star, a position I was proud to hold and enjoyed very much, even though it was hard work in a constantly-changing media environment.

Having booked bands for Dunmanway Youth Club as a teenager in the early 1970s, and then becoming involved in events such as the Macroom Mountain Dew Festival (including the Rory Gallagher concerts), I established a lot of contacts in the music business and – as a freelancer – successfully pitched a weekly entertainment column to The Southern Star, which started in January 1978 and continued for about 25 years.

Before that, editor Liam O’Regan had published my first article for the paper in October 1975. I did other one-off articles for the paper as well and eventually, in 1990, a vacancy arose for the new role of assistant editor.

I was lucky enough to be appointed and moved to Skibbereen 30 years ago.

When Liam O’Regan, who had been owner/editor for 50 years, died at the start of 2009, I was appointed editor and have been working in that capacity since.

The Southern Star is very much a team effort and would not happen without total buy-in from all the staff.

In this regard, I have been very fortunate to have worked with such a dedicated group of people – past and present – over the years and I would like to thank them all for their dedication to the cause.

My gratitude also goes to our freelance columnists, contributors, photographers and local notes correspondents, plus of course all of our readers, advertisers and customers.

I thank my wife, Tonette, and family for their support in taking on and doing the long hours the job involved.

I retire happy in the knowledge that I was of some service in developing the paper and its associated media platforms – which didn’t exist when I started out all those years ago.

The baton will be passed to my successor to carry on the 132-year tradition of The Southern Star as the go-to source of local news, views and sport across West Cork.

I wish them all the very best in this rapidly-changing media world.

Finally, to the O’Regan family and the management of The Southern Star, thank you for the confidence you showed in me since Liam gave me my first break all those years ago – something I have always appreciated and valued hugely.

On behalf of everyone involved with The Southern Star including our employees (both past and present), freelancers, directors and owners, I’d like to wish Con and his wife Tonette, every best wish for a long and enjoyable retirement and to sincerely thank him for everything he has contributed to the business for the last 45 years since his very first article was published and when he had a little more hair than nowadays!

Con has been employed by The Southern Star for over 30 years and has enjoyed a highly successful career culminating as editor of this famous newspaper title.

It goes without saying that Con will be missed both as editor but also as a key member of our publishing team and a respected colleague and friend to many.

I’d like to put on record my gratitude to Con, not just for all the hard work he has done across our newspaper, website, elections coverage, sports and farming awards and much more over the years, but also for helping to manage the delicate transition after Liam O’Regan’s sad passing in 2009.

Personally, I’m also very grateful for the support and wise counsel Con has given me since I joined as managing director nearly 12 years ago. Con, enjoy your retirement, you deserve it!

I would like to say a sincere “thank you” to Con Downing on his retirement which involved 30 years at The Southern Star and, in particular,  12 years as editor.

Con gave me unstinting support when he took over from the late Liam O’Regan in 2009.

Con always conducted himself at work as a true professional and his calm and friendly manner contributed to a very pleasant work environment. I wish Con and his family a happy retirement.